16 Best Songs from The Wolf of Wall Street Soundtrack 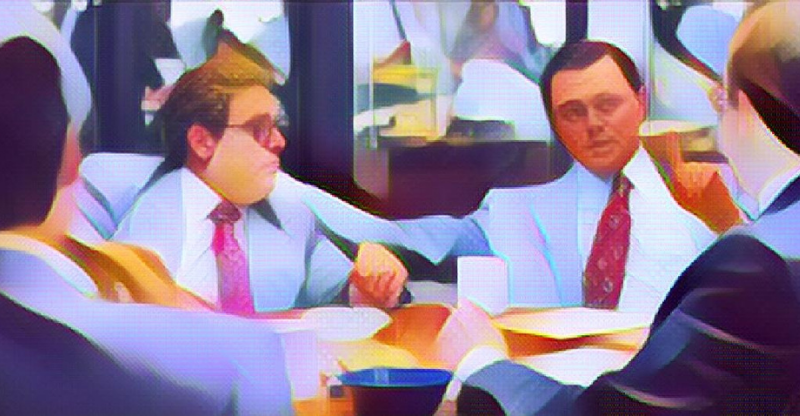 Martin Scorsese’s 2013 box office hit The Wolf of Wall Street tells the real-life story of Jordan Belfort, a one-time Wall Street broker who starts his own firm and swindles the uber-rich out of millions. As his empire grows, the FBI takes note and begins investigating Belfort and his colleagues.

The film takes viewers on a wild ride, and The Wolf of Wall Street soundtrack features a mix of jazzy numbers perfect for Manhattan streets and blues hits that give the story a gritty texture.

The smooth, uplifting saxophone in this jazzy number pairs well with the Manhattan streets featured in the movie. As ‘Mercy, Mercy, Mercy’ plays, the main character Jordan Belfort (played by Leonardo Dicaprio) arrives for his first day on the job in New York’s wall street district. After arriving, he meets his eclectic boss, played by Matthew McConaughey. Not long after Belfort starts trading, the stock market crashes and he’s back on the street pounding the pavement, looking for any company that will take him.

Related: Check out the best songs about New York City.

Originally, ‘Dust My Broom’ was written by delta blues pioneer Robert Johnson. Among many techniques that shaped early blues artists was Johnson’s invention of the blues “turnaround,” which is expertly exemplified with Chicago blues electric flare by Elmore James in his cover. The vintage blues song plays as Jordan Belfort is driving down the highway with his voiceover, discussing his high-class life.

A popular song among working-class New Yorkers in the ’50s and ’60s, this Spanish-inspired tune plays in Wolf of Wall Street when Jordan Belfort makes his first trade. Belfort would go on to have one of the most notorious careers in the US due to his natural selling abilities and financial prowess.

Related: Listen to more songs about being rich.

The lyrics of Billy Joel’s ‘Movin’ Out (Anthony’s Song)’ feature a socio-economic slant sometimes found in his work. In this tune, characters such as “Sergeant O’ Leary” and “Anthony” wonder if the work required for the “American dream” is really worth it. The song plays when Jordan Belfort gathers his friends to demonstrate his sales tactics.

Related: Get into a working mindset with the best songs about work.

An easy-listening big band song, Eartha Kitt’s recording of the French song ‘C’est Si Bon’ is featured during a climactic scene. As the song plays, Jordan Belfort and his mistress are fooling around inside a limo, and his wife catches them. The jazzy song was originally composed by Henri Betti in the ’40s. Lyrics were added by writer Andre Hornez.

Related: Sneak over to our list of songs about affairs.

Before ‘Goldfinger’ appeared in the 2013 film, it was the theme song to the James Bond installment of the same name. For DiCaprio’s film, soul singer Sharon Jones and her band, the Dap-Kings, covered it with striking attitude and sass. The song plays in the film during main character Jordan Belfort’s wedding scenes.

Related: Grab your (shaken not stirred) martini and head on over to our list of James Bond songs.

Stock market guru Jordan Belfort was well-known for his party lifestyle, and it was executed in epic style in the film. Bo Diddley’s ‘Pretty Thing’ is heard in the background during a montage of party scenes featuring Belfort and his crew. The tune follows the group as they embark on Belfort’s bachelor party trip, take an eventful plane ride, and finally end up at his wedding.

This popular jazz single has been covered many times by artists like Frank Sinatra and Ahmad Jamal. The first recording of ‘Moonlight in Vermont’ was released in 1956 by Louis Armstrong and Ella Fitzgerald. Jamal’s live version appears in the film when protagonist Jordan Belfort proposes to his love interest Naomi, played by Margot Robbie.

Chicago blues legend Howlin’ Wolf’s ‘Smokestack Lightning’ plays in the scene when governmental agencies investigate Jordan Belfort’s financial firm (as they scored one of their biggest paydays thus far). This song is considered to be one of the most popular blues songs of all time.

Related: You’ll love our list of the best lightning songs.

Money man Jordan Belfort was famous for his motivational speeches while running his firm, which ultimately swindled wealthy people out of millions. Jimmy Castor’s fun, highly danceable number ‘Hey Leroy, Your Mama’s Callin’ You’ plays after Belfort, played by Leonardo DiCaprio, finishes giving one of his epic speeches leaving his team amped up and motivated.

Malcolm McLaren’s song ‘Double Dutch,’ which focuses on the childhood game of the same name, serves as great parallelism in the film. The song plays in the background as finance entrepreneur Jordan Belfort has launched his own company and is looking for people to hire. He’s caught a big break by being featured in Forbes magazine. Due to the high-profile coverage, he’s received a record number of applicants.

‘Never Say Never’ was a popular early ’80s song for Romeo Void. The song, which covers a lot of different illicit subject matter, was an early hit on MTV when they began featuring music videos. The lyrics of the song pair well with the hard-partying lifestyle the characters lead in the film.

Defrauding rich people sometimes involves using a Swiss bank, and that’s exactly where Belfort and his team land when 7horse’s tune plays. Not only was the song featured in the film, but it also made appearances in the promotional trailers. Director Martin Scorsese even personally asked the band if he could use their tune for his film project.

Bo Diddley’s ‘Road Runner’ plays during a string of scenes highlighting Belfort’s financial dealings at his firm. Stratton Oakmont was stockbroker Jordan Belfort’s private company in the ’90s that sold high-risk stocks to wealthy people who didn’t really know what they were getting into.

Folk duo Simon & Garfunkel originally wrote this gentle tune, and in 1968 they won a Grammy for it. The Lemonheads covered the song in 1992, and Scorsese included it in here. The song plays during a turning point in the film when the FBI and DEA descend on his financial firm and begin making arrests due to fraud.

Related: Find the original song on the Forrest Gump soundtrack.

Cast Your Fate To The Wind – Allen Toussaint

This jazz instrumental was originally composed by Vince Guaraldi. Later, lyrics were added by Carl Werber. The American standard can be heard during the opening credits.