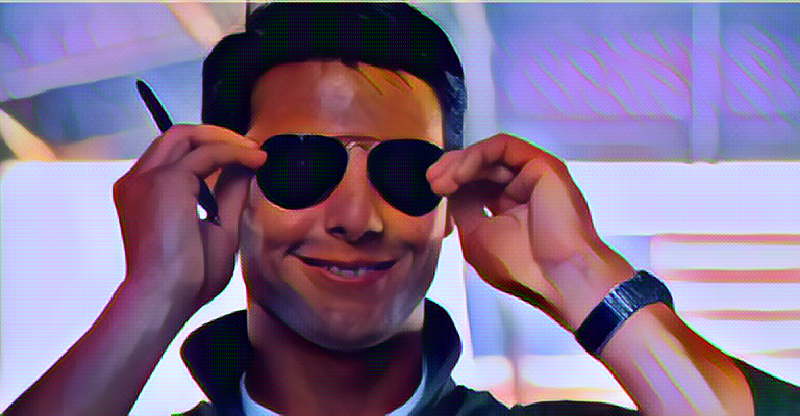 Top Gun is a much-loved American flick released in 1986 and was a huge commercial hit. The story revolves around a naval aviator, played by Tom Cruise, who gets the chance to train at the US Navy Fighter Weapons School and finds adventure and romance along the way.

So strap yourself in, flip down your shades, and enjoy the main songs from the Top Gun soundtrack.

‘Danger Zone’ is one of Kenny Loggins’ most well-known tracks and was written by the writers of ‘Take My Breath Away’ from the same film. It’s about the danger and excitement of air flight as a pilot, appearing throughout the airborne action scenes of Top Gun. Loggins was inspired by Tina Turner’s vocals while singing the song.

Related: Soar above the rest with the best songs about flying.

This song plays twice in the film: once as an instrumental version during the first training session and again in its full version during the end credits. It demonstrates the passion and yearning for adventure that many pilots feel, leading them to the aviation profession. This piece was released as one of the film’s singles.

Playing with the Boys – Kenny Loggins

Kenny Loggins sings as a guy who enjoys spending time with his male friends after a breakup in this tune, which plays during the film’s beach volleyball scene. Loggins released a male and female duet version in 2021 in preparation for Top Gun’s 2022 sequel film, Top Gun: Maverick.

Lead Me On – Teena Marie

This track is about a relationship that the female protagonist can’t seem to let go of. She dreams of her love interest, saying to her, “lead me on.” It is the fourth track on the Top Gun soundtrack written by Giorgio Moroder and Tom Whitlock, who wrote other tracks for the film, as well.

Related: Listen to more of the best songs about wanting somebody.

Take My Breath Away – Berlin

This popular track plays as Maverick and Charlie have their first passionate encounter. It’s even known as the film’s love theme and was written by Tom Whitlock and Giorgio Moroder, who wrote one of the film’s other famous tracks, ‘Danger Zone.’ It’s about feeling such a strong romantic connection with someone that you can barely breathe. The song won a Grammy Award for Best Original Song.

Related: Don’t hold your breath! Here are the best songs about breathing.

With this pop track, Gloria Estefan and Miami Sound Machine sing of people’s dreams of finding adventure and love in the summer. It’s the sixth piece on the film’s soundtrack, written by Michael Jay, Roy Freeland, and Alan Roy Scott. Band member Emilio Estefan and one of the film’s songwriters, Giorgio Moroder, produced.

Related: Spend your summer chillin’ with these cool summer songs.

Heaven in Your Eyes – Loverboy

‘Heaven in Your Eyes’ appears briefly during a bar scene in the film, but the entire track is found on the soundtrack album. The track’s narrator asks a love interest to give their relationship another chance and promises not to cause any heartbreak this time.

Related: Does everyone deserve to try again? Here are some songs about second chances.

Through the Fire – Larry Greene

Larry Greene encourages listeners to live each moment to the fullest in exciting ways with this piece, with lines such as “Live your life/As if each second was the final one” driving its point home. This was written by the film’s songwriters. ‘Through The Fire’ appears as the eighth song on the film soundtrack.

Related: Seize the day with the best songs about living in the moment.

Marietta sings of the importance of enjoying new experiences—even if they are unknown and scary—in this track. The song says about life and the narrator’s journey: “It don’t matter where it takes me/Long as I can keep this feeling/Running through my soul.” It appears as track nine on the Top Gun soundtrack album.

Steve Stevens provided guitar music for this Harold Faltermeyer instrumental piece. An edited version plays at the beginning of the movie, while the full rock piece plays at the end of the film. This anthem won a Grammy Award for Best Pop Instrumental Performance.

(Sittin’ On) The Dock of the Bay – Otis Redding

Maverick and Charlie eat dinner on Charlie’s porch as this song plays in the film. The characters listen to the track as Maverick tells Charlie that his mother often played it after his father passed away. The song, released a month after Otis Redding’s accidental death, is about enjoying the calm moments of life and being comfortable with who you are.

Related: Here’s our humble list of the greatest songs ever.

Jerry Lee Lewis’s classic is used as Goose’s catchphrase and signature song in Top Gun. It’s a hyper track about a wildly passionate love affair full of a surprising amount of innuendos for a song of its time, which would be its release year of 1957. Maverick also performs this with his friend Goose in a scene from the film.

Related: Head over to our list of songs with the word fire.

Maverick serenades Charlie with this track when he sees her in a bar during the movie, without its intended effect; Charlie is irritated by his display. Later in the film, Charlie plays the song on a jukebox to get Maverick’s attention. The song is a classic about that sinking feeling one gets when it’s evident that a relationship is quietly falling apart.

Related: Fuel your cry session with these sad breakup songs.

The narrator of this track falls in love with a longtime female friend and feels powerless over his feelings for her. Besides appearing on the Top Gun soundtrack, this REO Speedwagon hit has made numerous pop culture appearances over the years and has been covered by various artists. It was the 16th song on the Deluxe Edition Top Gun soundtrack album.

Related: Find this song on our playlist of classic 80s love songs.

This song’s idea was inspired by the Kahlil Gibran poem of the same name. This literary work also inspired The Beatles’ song ‘Blackbird,’ which has since inspired other tracks with themes of broken wings. The track’s narrator asks his love interest to work with him to repair their broken relationship. The song appears on Top Gun’s soundtrack album in its Deluxe Edition as the 17th track.

Here’s a track where Europe sings of a trip to space where the adventurers are leaving Earth behind. It’s a fictional apocalyptic piece that has optimistic vibes and dramatic tension. It appears on the Top Gun soundtrack.

Related: Hiding in a bunker? Here’s our list of end of the world songs.

This track is all about a powerful love relationship that allows both partners to pursue their goals together, no matter what the outside world says. It appears on Top Gun’s Deluxe Edition soundtrack album as the 19th track and reentered the UK charts in 2013 after appearing in a commercial.

The Power of Love – Jennifer Rush

Jennifer Rush wrote this song about a powerful relationship based on inspiration from her own romance with then-boyfriend Steven Engebretson. Rush’s version hit Number One in the UK, while Celine Dion’s cover reached Number One in the United States. It appears as the last track on the Top Gun soundtrack’s Deluxe Edition.

Related: Grab your soulmate and listen to these songs about true love.