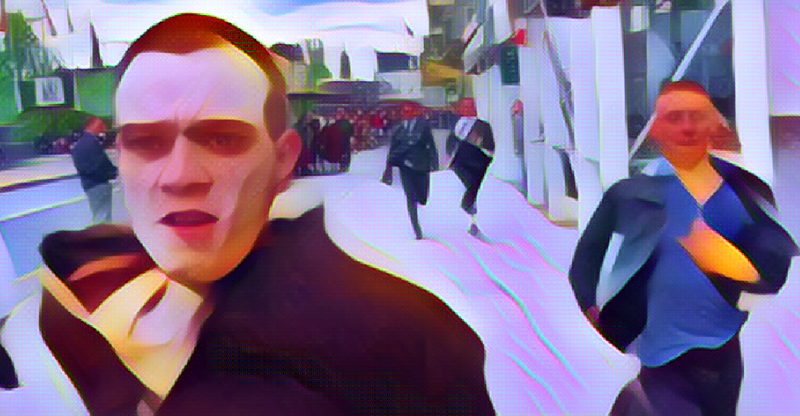 Trainspotting is a 1996 comedy-drama film about a group of individuals in Edinburgh who deal with addiction and the ups and downs of life.

Celebrate this film classic by revisiting the songs from the Trainspotting soundtrack.

This Iggy Pop track about living a hard lifestyle plays during the opening scene. Renton and his friends are chased through Edinburgh as the film’s opening monologue from Renton plays. The song marked a hallmark moment in the film and found decent success with its soundtrack re-release.

Related: This song features on our playlist of songs about the meaning of life.

Brian Eno’s instrumental song plays during an awkward health moment for Renton, who comes into contact with a revolting public restroom at the time. The song adds comedy to the scene and is remembered for its part in this film moment. Daniel Lanois and Roger Eno wrote this along with Brian Eno.

Here’s an instrumental track from Trainspotting that also serves as its title track. It is the third track on the soundtrack album and runs an impressive ten minutes and 36 seconds long; it’s the longest piece from the film. Renton and Sick Boy lament aging as this plays in the film.

Related: Life moves too quickly sometimes. Listen to these songs about growing older.

Sleeper covered this Blondie track for the Trainspotting soundtrack. It was also used to emphasize a clubbing scene in the film. Its lyrics are simple, with a narrator asking a seemingly physically attractive love interest to allow them to have a memorable night together. The song has been covered numerous times and featured in other media productions; a Finnish version called ‘Painimaan’ was also recorded by the band Sleepy Sleepers—not to be confused with Sleeper!

Related: Here are the best songs about fooling around.

This New Order track tells a tale of heartbreak, with a narrator saying, “I’ll find my soul as I go home.” Diane sings the song during a shower scene in Trainspotting and is heard briefly in two other scenes in the film; it highlights the negative side of Diane’s and Renton’s relationship each time. The entire song is on the film soundtrack album.

Iggy Pop’s ‘Nightclubbing’ criticizes the 1970s hard-partying club lifestyle; its simplistic lyrics highlight the shallowness of party life. The song plays in the film as Renton and his friends return to their addictive ways. This is one of two Iggy Pop songs featured in the film; ‘Lust for Life’ is the second.

Related: Keep the music going with this party song list.

The protagonist of ‘Sing’ says, “I can’t feel/’Cause I am numb/So what’s the worth/In all of this?” The song was released in demo form because it was considered a great song as-is. Its lyrics are simple, but it is the third-longest track on the Trainspotting soundtrack album at six minutes and three seconds long. The lyrics are fitting for the film, as it plays when Renton realizes the price he must pay for his hard lifestyle.

This song talks about a romantic day that has sinister undertones on a personal level. Renton experiences a personal crisis and one of his worst days in Trainspotting when this song plays; it has been a popular track since being included in that scene. Interestingly, ‘Perfect Day’ was also featured in an AT&T commercial during the 2010 Winter Olympics.

Mile End’ was a B-side release for Pulp that was also a part of the Trainspotting soundtrack. It discusses the desperation involved when one is homeless and must find any living arrangements, even if they are horrific by typical standards. It begins to play in the film as Renton attempts—and fails—to build a new life in London.

Related: It’s tough when you can’t make a payment. Here are some songs about not having money.

For What You Dream Of – Bedrock featuring KYO

Renton and Begbie go to a club as Renton reflects on society’s changes as this song plays. The two have a hard time adjusting to the rapid transformation around them. The song’s lyrics are dark but speak to having a sense of hope and remembering your dreams, even when you feel lost.

This song plays as Renton realizes he and his two friends aren’t fitting in with London culture as he’d hoped they could. The lyrics are about feeling lost, confused and out of control, especially where making important or impossible decisions is concerned. The song appears on the film soundtrack and Elastica’s self-titled album.

Related: See similar songs on our list of the best songs about being alone.

Renton gains new strength as this song plays, finding himself at a crossroads where he can either take the chance of going back to his old ways or try to forge a new path. The song’s lyrics are about giving up on one’s dreams, particularly dreams of being a music star and writing a hit song.

Related: Don’t lose hope! Here are the best songs about not giving up.

This track ended up being one of the film’s biggest hits. The unusual lyrics seem to speak to personal strength and change by the song’s end; this is fitting for the film, as it plays when Renton decides to change his life for the better and become a functioning member of society.

Related: Find the courage to start over with these songs about a new day.

This song is primarily instrumental; its only lyrics are titles of James Bond films. It helps to highlight and satirize Renton’s decision to become a full member of London society, as this is framed by the film as just new conformity to a potentially dangerous lifestyle where his well-being is concerned.