4 Easy Tremolo Picking Exercises to Get You Started 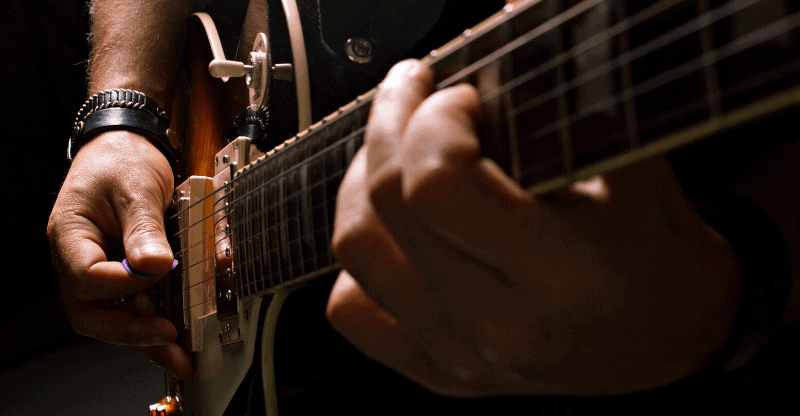 As you get more and more accomplished on guitar, you become aware of a number of different picking techniques.

There’s alternate picking, sweep picking, economy picking and a host of others.

Some of them are self-explanatory; you can guess what they’re about from their name.

Tremolo picking is one of those.

What is Tremolo Picking?

Tremolo picking is a form of alternate picking that creates a wavering effect similar to the sound of a tremolo.

It involves rapidly picking individual notes, giving them the effect of sounding like one long, flickering note.

Tremolo picking can be a great way of creating sustain, and it’s very popular in Latin styles of music (steel band music from Trinidad and Tobago, for example), as well as surf rock and some heavy metal.

You might have heard the term ‘tremolo’ in association with a whammy bar before, however, don’t get confused.

The effect a whammy bar (misleadingly called ‘tremolo’ by Fender back in the ’50s) creates is vibrato, not tremolo.

The tremolo effect doesn’t shift the pitch of the note like a whammy bar does, rather wavers it in and out, creating a ‘shaking’ sort of sound.

As well as being an end in itself, enabling you to play great Latin, surf rock and heavy metal lead licks, the skills you gain from trem picking will enhance your general picking ability.

If you can pick fast enough to successfully trem pick, a lot of other things will become easier, too.

That tricky strum pattern, with the sixteenth note section? No problem.

So, let’s dive in with some exercises, to get you started with this skill. The first one isn’t trem picking per se, rather an alternate picking exercise to prepare you to trem pick.

Switch on a metronome, and alternate pick in time with each tick (check out our guide to using a metronome if you need a refresher).

You can set the speed to whatever you feel comfortable with. In the audio recording below, I set it to approximately 100bpm.

For the second exercise, let’s double this speed.

Instead of only striking when the metronome ticks, pick twice: once on the tick and once halfway between ticks.

If you’re not used to playing with a metronome, concentrate hard to make sure you’re playing in time.

Every other pluck should match up with the metronome.

Instead of one or two plucks per beat, let’s play four.

It might help you to think of the words ‘Coca Cola’, with each ‘Coc’ matching up with the metronome.

If it feels tricky to maintain consistency to start with, don’t despair. Just keep going.

Ok, now we’re really going to go for it.

I’m assuming you’re still at a reasonable speed on your metronome.

Trem picking can be quite tricky to get the hang of.

One trick that works for some people is moving your pick closer to the bridge than usual. If you pick down there, the string will move less, making it easier to go faster.

Wherever you position your pick, practice these tremolo patterns until you can play sixteenth notes at most tempos. We’ve started at (approximately) 100bpm. But that’s not so fast. Try 110, 120, and beyond.

Tensing up won’t make you go any faster, but it will make your arm very tired. Think about it, your wrist can move faster than your whole arm, can’t it? And that’s what should be moving.

If you do find your arm getting tired, make a conscious effort to only use your wrist to move the pick back and forth.

Although it can be quite demanding, trem-picking is a useful technique that can lead to some very cool sounds.

Whether you’re interested in playing Latin music, Surf Rock or Heavy Metal, this speedy trick is an excellent addition to your tool kit.

Make sure to practice alternate picking 16th notes with a metronome, at increasing speeds. Hold your pick closer to the bridge to make it easier, and use your wrist – not your whole arm.

Once you’ve mastered it, why not go on to learn another picking technique?