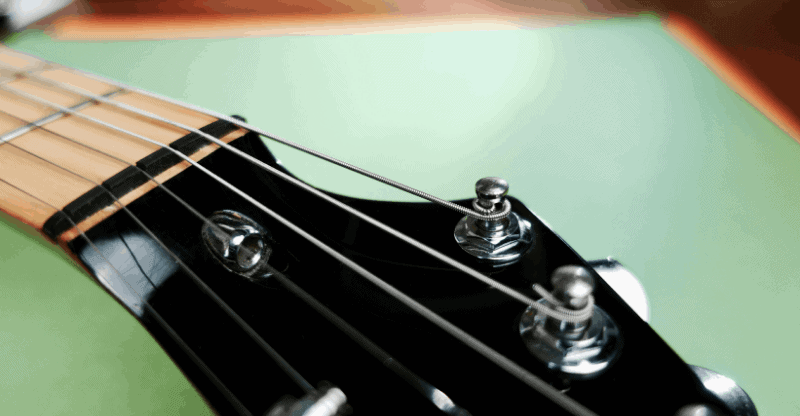 Truss rods are the silent heroes of the guitar, keeping your neck at the perfect angle but not wanting any of the limelight.

Ever since the early 1900s and the advent of steel guitar strings, they’re have been used to compensate for the immense bending force of the strings on the neck.

In this article, we explore the role they play and discuss the different types that are used.

What is a Truss Rod and What Does It Do?

A truss rod is a long metal (sometimes carbon fiber) bar that reinforces the neck of a guitar and counteracts the force of the strings. It’s found in a channel that runs most of the length of the neck, from the guitar nut at the top of the neck to the heel at the bottom.

If you removed the fingerboard of your guitar (not a good idea, by the way) you’d see a thin gap with the rod in it, anchored at one end and adjustable at the other.

Here’s what it looks like (so you don’t have to take your fretboard off!):

Without a truss rod, the neck (made of wood remember, not the hardest of materials) would gradually warp – in other words, bend – beyond repair from all that tension.

There are various truss rod types we’ll look at in this article, all designed to counteract the tension of a guitar’s strings that are constantly pulling on the neck.

Until the ’90s and to this day, many guitar necks have single-action rods, also known as ‘one-way’ or if you want to get really fancy ‘single expansion’ rods.

The rod is anchored at one end of the neck (usually at the bottom) and has an accessible adjustment mechanism at the headstock end typically consisting of a 1/4″ nut that can be turned using a screwdriver or Allen wrench.

This type of rod is pretty limiting though, as it can only apply tension in one direction. In other words, it can only straighten out an overly concave bow (called an ‘up-bow’, see below).

As you tighten the nut, the rod exerts a force that pulls against the string tension. By tightening the adjustment nut, it will correct that banana-shaped ‘up-bow’.

Note, a very slight amount of concave neck bow— or what’s known as ‘relief’ —is actually needed, so you don’t want it to be flat-neutral like an ironing board, just a little bit (guitar strings actually vibrate in an arc).

So far so good, but what if you have a back-bow you need correcting? Well, you’re out of luck (read on, my friend).

A bi-flex rod is still a single rod, but works in both directions and is used in all American Professional models.

Adjusting the thread at the end of the truss rod counteracts the tension of the strings that either increases or reduces the distance between the strings and the frets based on the way you turn them. With this type of rod, you can actually force the neck into either a concave or convex shape.

So it can correct an overly-aggressive up-bow just like a single-action rod, but it’s also able to force a back-bow, making it much more versatile.

Far more common than the bi-flex rods are double-action rods, which provide the same functionality of the bi-flex (namely the ability to bend the neck both ways) but they do it using two rods rather than one. It’s a more simplistic way of doing it, but it works nonetheless.

One drawback, however, is that these double-action rods require more wood to be extracted from the neck (there’s two of them, remember), and generally speaking that’s not great for tone.

That said, they take a minimum portion of the neck wood removed and are wrapped in a thermo-stringent sheath which supposedly helps.

In the very olden days, when gut strings were used, guitars didn’t have any need for truss rods. Then around the ’20s luthiers started adding a square-section of hardwood like ebony along the center of the neck, under the fingerboard. Martin’s first steel rod came about in the ’30s (called the ‘T-Bar’ truss rod).

Found on older guitars like archtops, classical guitar, and some flattop guitars, non-adjustable rods – also known as ‘K-Bars or ‘Steel Re-enforced Necks’ – are typically composed of wood, graphite, or metal, and cannot be altered or manipulated.

Truss rods are installed on the necks of many instruments to help resist the large amount of force pulling on the neck from the strings (though they aren’t usually required on guitars with nylon strings).

They also let you dial in the correct amount of tension on the neck to get the desired neck relief which in turn improves the instrument’s playability.

While some old guitars don’t have them at all, with most modern steel string guitars you’d be in trouble without a truss rod.

So next time you pick up your guitar, take a moment to observe where the rod is and give it some credit – it’s keeping you on the straight and narrow (quite literally :-))

Finally, if you want to learn how to adjust a truss rod here’s a great tutorial from the guys at Fender: