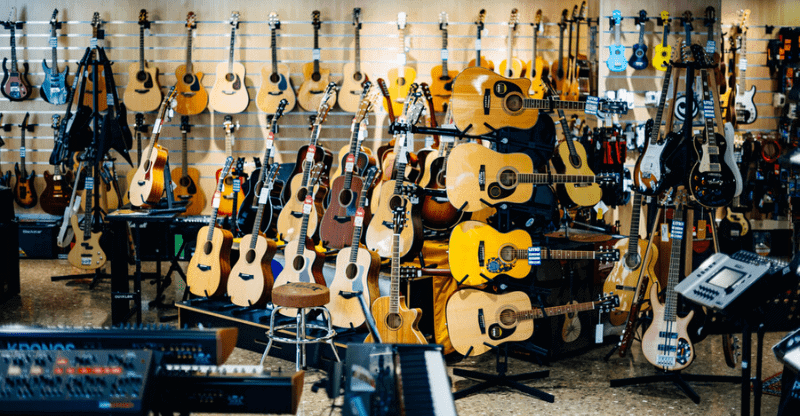 There are many types of acoustic guitars that differ in shape and size that are designed for different styles of music.

In this article, we walk you through the many different guitar shapes, from small guitar types to the dreadnought guitar size and beyond.

Here are the 10 most popular guitar sizes, from small guitar types like the parlor and concert size guitar to the large dreadnought guitar size.

If you’ve ever done some traveling, especially backpacking, you’ll know space is a premium. While it may be feasible to spend months traveling with a full-size one, it’s not ideal, especially when one of these might do the job just as well and make your travels more enjoyable in the process.

Known as ‘traveler’ guitars, they’re the smallest of the lot (any smaller and you’re looking at a ukulele which comes in some really teeny packages) – as you can see in the pic, they have a very slim body to save on space. This makes them fairly tricky to play, but when saving space is a priority, that’s a trade-off you’re maybe willing to make. They’re also relatively light too, so won’t break your back lugging them about.

They come in a variety of shapes and some more complex models offer a foldaway design that collapses at the neck joint. Some are also electro-acoustic too, which is ideal if you plan on impromptu gigging or busking through an amp.

Because of their diminutive size, don’t be fooled into thinking they’re cheap – many are just as expensive as ‘big’ guitars (you’re paying for the innovative design, basically).

Who are these best suited to?

Note: we wrote a guide to travel guitars if you’re looking to buy one of these.

Next up in size we have the mini. The good thing about these is they play like 4/4 models, only they’re shrunk down in size. If you want the best sound in the smallest box, check out the mini.

Because of their compact nature, you compromise on one thing that may or not be important to you: bass frequencies. Due to their anatomy, they’re quite trebly. They’re bassier than the traveler variety, but still relatively light sounding compared to the bigger models further down the page.

But enough of their disadvantages. Another good thing about them is they work great for kids too. As they are relatively short-scaled, the smaller fretboard helps if you’re an adult with small hands too.

Some players, regardless of whether they’re on the road or not, prefer the sound and playability of these anyway (Ed Sheeran famously plays a small Martin out of choice rather than necessity).

Who would benefit from one of these?

Next on the list is the Parlor guitar (or ‘Parlour’). These were the original compact guitar, and were popular during the late 19th century through to the 1950s. CF Martin designed their distinctive shrunken body shape, with the neck typically joining the body around the 12th fret.

They’re comfortable enough to play on a front porch or equally at small to medium venues (hence where the name Parlor comes from – a Parlor was the name for old reception and commerce rooms).

Having a smaller frame also has obvious benefits in terms of comfort, and playability, but as with the mini and traveler type above, the trade-off is lack of bass.

If your style is less brash and you want your voice to be the focal point, a Parlor could be a good choice, as its typically favored by players of more low-key, subtler musical styles like folk and indie. In fact, the godfather of 90’s indie angst Elliot Smith used one in his early career, and some of the best blues acoustics are Parlors.

Who are these best suited to?

Here’s one in action:

Another timeless classic, the Concert model dates to around 1854 and was the standard size around the time of the US Civil War and after. Like the Parlor, it has a trebly, bright sound with little relatively little bass.

Similar to the Parlor, this style has enjoyed a recent resurgence. The year 1877 saw the introduction of the Grand Concert model, which was actually smaller than the Concert with shallower body shape and rounded bouts (shoulders). Its small stature makes it a good choice for younger players, or small-framed adults.

The concert shape is more similar to the classical shape and has a narrower, more slender waist than the Dreadnought giving it greater sound definition – but still has a larger lower bout than a Classical.

Due to its smaller soundboard, it produces a quieter sound, and isn’t too bassy, making them superb for fingerpicking styles. Thanks to their rounded, more defined shape they sit on the leg effortlessly, making them easier to play than Dreadnoughts.

Between the Concert (above) and the Dreadnought (see below), we have the Auditorium, also known as an ‘Orchestra’ model. It was introduced in the early 1920s.

At the time, it was the largest six-string of its day – with the later introduction of the Dreadnought and Jumbo models, the Auditorium is now considered a medium-sized model with a thinner waist than a Dreadnought, a broad upper bout with flatter shoulders. It’s bigger, boomier sound and good treble-bass balance make it a great all-rounder as it manages to balance volume, tone, and playability.

Auditoriums are generally more sensitive than Dreadnoughts, but with a higher volume ceiling than the Concert so they work well if you like to combine light touch playing (such as fingerstyle) with aggressive playing (strumming, flat-picking).

As mentioned, these beauties prove to be ideal for picking styles as they have a more balanced midrange, with less bass. Perfect for picking out those intricate and delicate passages within a song. Again they’re smaller than the Dreadnought, making them more comfortable to play as the hourglass body shape fits perfectly on the leg.

Manufacturer CF Martin launched the ‘Dreadnought’ design in 1916, the name originating from a class of old English warships called HMS Dreadnought which were the most powerful battleships in the British Royal Navy.

When the average Joe thinks of an Acoustic, it’s likely that the Dreadnought shape comes to mind first. It’s the most popular of all types and played by just about everyone from Elvis Presley to Jimi Hendrix.

The main reason behind its popularity is its versatility: it strikes an even balance between volume, body size, and ease of playing. Its wide and rich tone is well suited to playing in an ensemble too, adding to its popularity.

With a standard neck length – the neck typically joins the body around the 14th fret – it’s easier to play ‘up the neck’ and reach higher frets compared to the smaller models above.

Similarly, in contrast to smaller models on this list, the Dreadnought has a fantastic bass response, excellent projection, and rich tone. They’re also favored by players who prefer to strum and flat-pick (so ideal for bluegrass and country), but not so great for fans of fingerstyle.

Who is the ideal customer?

Here’s a clip of the Dreadnought in action on a bluegrass track:

Jumbos are the largest of the lot and have a very loud, powerful sound that is ideal for players with a strong strumming style. Gibson made the first of the great Jumbos (starting with the Gibson J200).

Due to the sheer vastness of them (some Jumbos have a 17″ lower bout width), there’s plenty of room for space for sound to reverberate around the body resulting in a loud, big tone that smaller-bodied models can only dream of.

They offer the most volume and bass response, making them perfect for fingerstyle as there’s a clear distinction between the bass and treble notes. They’re also a handy addition if you play in a group and want to back up the group with a strong, bassy sound.

Their largeness may understandably be off-putting for players of smaller stature. Whether or not this is the case for you, all comes down to personal preference – but if you’re ‘larger-framed’, this might be just the ticket.

Who are these suited to?

Note: We reviewed some of the best fingerstyle guitars here

As the names suggest, this is by far the oldest type of ax on our list – dating as far back as the early 16th century.

Two of the primary differences between these and the majority of others on this page are 1.) the nylon strings and 2) the wider neck.

The nylon strings are the biggest difference to steel-string models, adding a subtly in the tonal color that can’t be matched with metal strings.

The wider neck makes fingerpicking easier and the fretboard on these models tends to join the body at the 12th fret.

This creates a mellow tone that is comfortable to play.

Some of the best music in the world was written for and played on this style. Similarly, a lot of great guitarists played this style (Charlie Byrd, Paco De Lucia, Andres Segovia, etc.), as well as popular music artists such as Leonard Cohen, and Willie Nelson (see below).

The ideal player for this type?

First produced and made famous by Selmer-Maccaferri in the early 1900s (and famously played by the legendary Django Reinhardt), gypsy jazz, or ‘jazz manouche’ style guitars are a worthy addition to this list.

Steel strung, yet the body (especially the headstock) looks more like a Classical. With the small soundhole, they project or ‘bark’ a lot more than any other model on this list, as they were originally designed to be played in bustling Parisien dancehalls with no amplification.

How they’re played also changed the tone massively too, and to get the authentic sound out of them you’ll need to know your arpeggios and master rest stroke picking.

While flat tops are by far the most common shaped top, the ‘Archtop’ is favored by jazz musicians as they produce a ‘purr’ rather than a roar. They’re not as loud or as lively as the flat top, but can be just as pleasing on the ear.

Which is the Best Shape for You?

We’ve done our best to list all the types of acoustic guitar out there, and hopefully having read this will have helped in deciding which type best suits your needs. The best one for you will depend on a few things: most obviously, the music you play, but equally your physical size as well.

One type we didn’t mention is the 12 string which produces a jangle and shimmer that is very particular. The sound is a bit like playing two in unison, creating a natural chorus effect.

Remember if you’re happy playing the electric guitar 99% of the time, and only need an acoustic for the odd song (or section of a song) just get an acoustic simulator pedal that makes your electric sound like an acoustic.