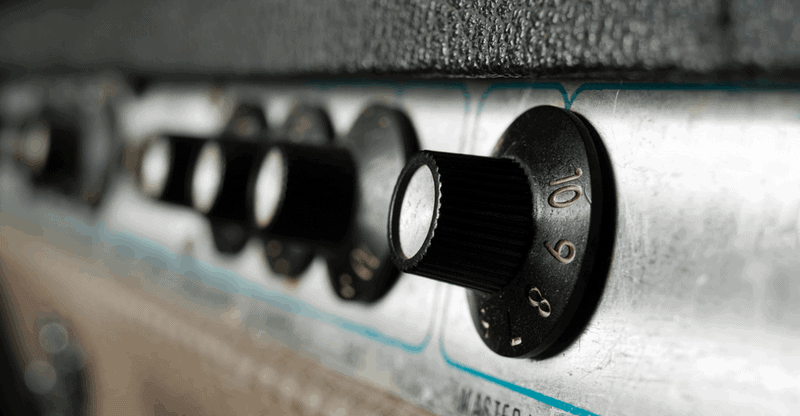 Understand and being able to differentiate between the many types of guitar amps is one of those things that accomplished musicians can do effortlessly.

Broadly speaking, there are four types suitable for an electric guitar:

Each uses different technology (well, variations on the same technology) to produce tone and are a combination of combo, head, or half stack/full stack.

In this article, we’ll walk you through each one and the pros and cons of each.

Tube (or ‘valve’ in England) amps use vacuum tubes/valves to make sound.

They were the first type of guitar amp to exist and most of the great rock and blues tracks we know and love were recorded using one – hence why they’ll always be favored by guitarists.

The one characteristic they are known for, above everything else, is warmth.

The other thing you’ll want to be aware of is a term known as headroom. As the level of the signal that enters the tubes increases, so does the level of distortion in the sound output. So they give you natural overdrive.

This means they have a particular volume and gain at which everything will begin to sound muddier. Metal, blues, and rock music were built on this.

Solid state or ‘transistor’ amps are generally more dependable since they utilize transistors in place of tubes. The signal never changes and has no possibility of overloading the amp, resulting in them being cheaper and easier to maintain, as the only real damage you’re likely to do is blow out the speaker if you insist on playing metal with all of the settings cranked up to the max.

The sound of these lacks a lot of the unique character found in tube amps, but they are still hugely popular and the preferred option for many guitarists such as Radiohead’s guitarist Jonny Greenwood who plays a Solid State Fender Eighty-Five, as well as John Fogerty and Andy Summers, among others.

They’re also great for modern jazz, where players often want a super clean tone. The Roland Chorus JC-120 is one of the favorites.

An evolution of the solid state amp is known as the modeling amp, often called a ‘digital guitar amp’. These use computer circuitry to emulate (or ‘model’) the sound of some of the most famous and recognizable amps in the world. They’re lighter, more reliable – and if shop around, some modeling amps such as the Line 6 Spider V120 sound pretty good.

Sure, they don’t sound 100% like the real thing, but they’re often close enough. Many of the best practice amps are modeling amps.

Still not convinced they can accurately emulate the real thing? Try this challenge and see:

If you really can’t decide between valve and transistor, you could always choose a hybrid. As the name suggests, hybrid amps offer you (in theory at least) the warmth of a tube amp and the reliability of solid state amps.

They’re a great compromise. If can’t stand the idea of an electronically emulated tube sound, these pack real tubes (sometimes just one tube) as well as all the electronic stuff you’d expect to find in a solid state amp.

The downside? You can end up betwixt and between. In other words, a tube amp that sounds a bit naff, and a solid state that’s not a great sounding transistor amp. They’re also more expensive than modeling amps.

Combo amps have everything you need built into one box (preamp, power amp, speakers) – including the controls for volume, gain, and EQ, any built-in effects like overdrive or reverb, inputs, and outputs for effects pedals, amplification circuitry and at least one or two speakers.

The combo amp is great for playing at home or small gigs which don’t need extreme levels of volume. Bigger venues will require more wattage, that’s where ‘head’ units come into play.

Unlike the combo variety, head amps don’t include speakers – the only thing they do is amplify your signal, meaning you can hook up as many speakers (called ‘speaker cabinets’ or ‘cabs’) as you like. This lets you use the same device to cover an entire range of venues, from smaller gigs up to the biggest arena. All you need to do is choose which speakers you’re going to connect it to.

Half Stack vs Full Stack

So there you have it, four types of guitar amps that each have their own pros and cons.

When deciding which is right for you, it’s helpful to think about what you plan to do with it.

Will you be gigging with it, or is it likely never to leave your home? If portability is key, don’t go with a tube amp.

Will you like the ability to jump from one amp voicing to another, or are you perfectly happy with one tone? If you like to jump around, don’t go with a tube amp.

Are you most bothered about the tone? Do you want to sound like the guitar greats? Then it HAS TO BE a tube amp, despite all the flaws I just mentioned 🙂

Good luck with choosing, and don’t obsess over your choice too much. Amps are pretty easy to shift, so you can always sell it on if you grow tired of it after a while. The most important thing to get playing, and not go into analysis paralysis over gear.