The 6 Most Popular Types of Guitar Inlays 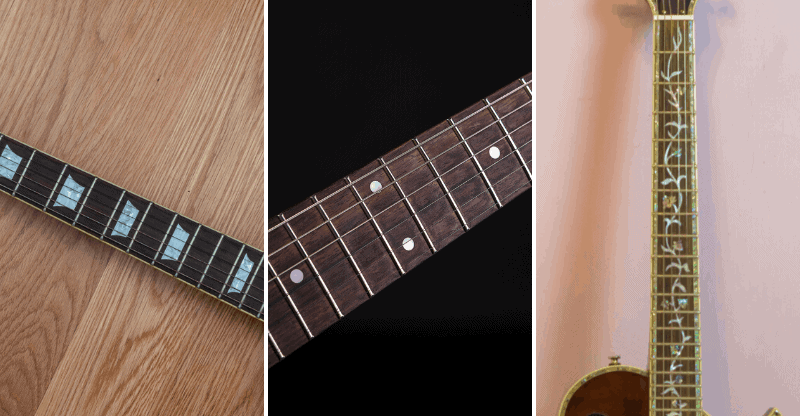 Inlays are decorative elements in the exterior wood of both acoustic and electric guitars.

They’re often beautiful and add to the guitar’s overall look and uniqueness and mostly found on the:

Some inlays, such as fretboard inlays, serve a purpose to help beginners. Other inlays are on the guitar for aesthetic purposes or to match modern styles. Inlays are common in dot form on the fretboard, but they can also appear on the side of the neck or custom-placed anywhere.

Fretboard Inlays as a Learning Aid

Many beginners learn the phrase ‘follow the dots’ as they learn to play. The reference comes from fretboard inlays, which help beginners play without making as many mistakes.

Guitar fret inlays, sometimes called fretboard markers, are often circular dots. When they’re spaced out across the neck of the guitar, the classical design serves as a visual aid to guide your hands toward the correct note. In other words, guitar inlays tell you which fret you’re playing if you look at the neck.

Each guitar fret inlay is spaced mainly on the odd-numbered frets or:

This is the most popular fretboard inlay pattern. The location of each dot is vital because you need a quick reference for the bass notes you stack other notes on top of as you play chords.

The natural C Major Scale notes appear along open E strings at each inlay or odd-numbered fret. In this pattern, the 12th and 24th frets are marker with double inlays.

The most important fret inlay, however, is the 12th. The 12th fret inlay has double dots to stand for the 12 notes in a chromatic scale without repeating the original note in a higher octave (or at the beginning of the first note, only at a higher pitch).

The other, less popular inlay pattern houses an inlay at the following frets:

The 9th fret is the exception, which is why banjos often come with a 10th fret inlay instead. The 12th and 24th frets still have double inlays, and playing the frets provide a perfect minor pentatonic scale. The pattern is also similar to a piano keyboard layout.

Another benefit of frets is that they aid your hand position as you play the guitar. Most people’s hands can cover an average of four to five frets at once. As you play, any position encompasses two inlays. The third note in the sequence will then appear on the next string up.

Overall, the design of fretboard inlays is interesting. Adding a mathematical element based on the octave is a unique way to interface with music. You can use the strategy during a solo to also sound fresh and more intense. Just add 12 frets to your current position.

The style or design of the inlay varies, although a circular dot is the most common. Some designs instead use a rose, diamond, or even vampire bats. 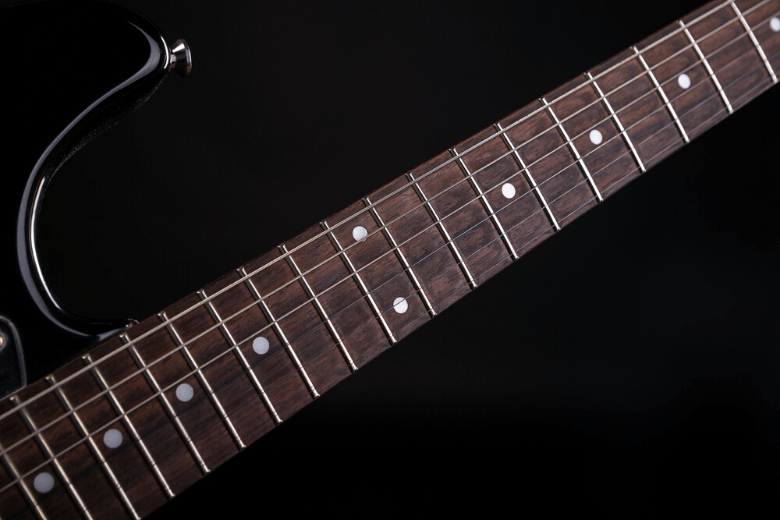 The inlaid position markers, like on a Fender Stratocaster, are a circular dot inlay design. The dots help players identify notes on the fretboard, but they also have a historical significance that helps you date your strat (you can use dot inlays to tell if you have an original or vintage guitar).

Stratocasters, for example, were originally made using maple fretboards with black dots as inlays.

From the time of its release (1954) to 1959, the dots nearly aligned with the A and B strings along the 12th fret. The 1959 rosewood fretboard design comes with white clay dots with the same fret spacing as the original design.

However, after 1963, both the maple black dots and the rosewood clay dots moved closer together. The rosewood clay dot material was replaced with pearloid to look like a more affordable mother of pearl, and the change stuck around until 1983. 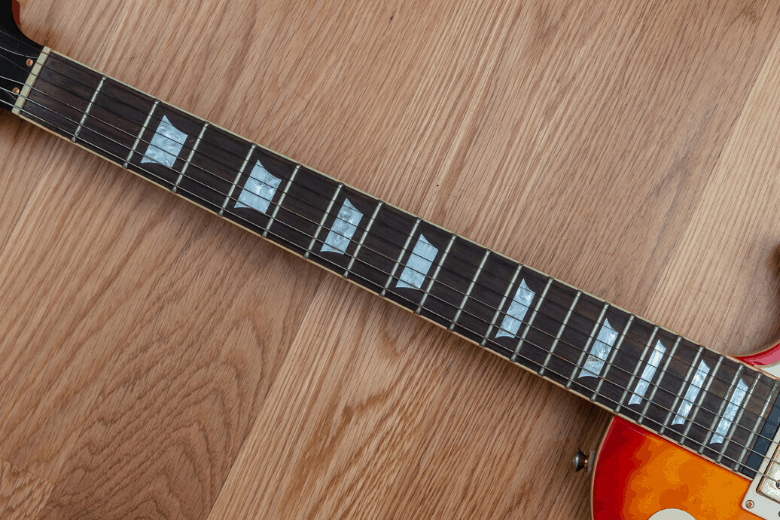 Although Gibson is well-known for featuring dot inlays on many of their classic designs, they have some trapezoid and black inlays on models like the Les Paul or the ES-335.

Trapezoid and block inlays appear much fancier than Fender’s dot design because they require a professional luthier to create difficult cuts using a scroll saw. The process involves precision and a lot more time than other types of inlays, which is why Gibson gained a high-class image and higher price tag for this guitar design.

Rather than use plastic or clay, Gibson used mother of pearl for the trapezoid and block inlay material. Sometimes other manufacturers use a fancy celluloid plastic for a bright and wavy appearance – like a pearl.

On Les Paul standards, a trapezoid inlay never sits at the first fret. Instead, the company put the Les Paul Custom in that location, which is another bit of technology they’re known for. 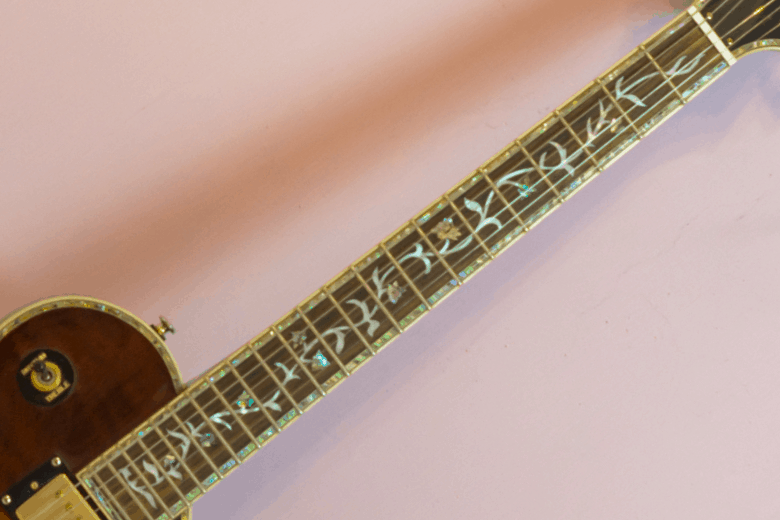 Not to everybody’s taste, the tree of life inlay design was made famous by Ibanez, and often found on the 1960s Lawsuit Era models.

You’ll see the distinctive tree of life featured on many Ibanez models. Even Bob Weir from the Grateful Dead has a guitar with a classic tree of life inlay. However, the design is most commonly associated with shred wizard Steve Vai. 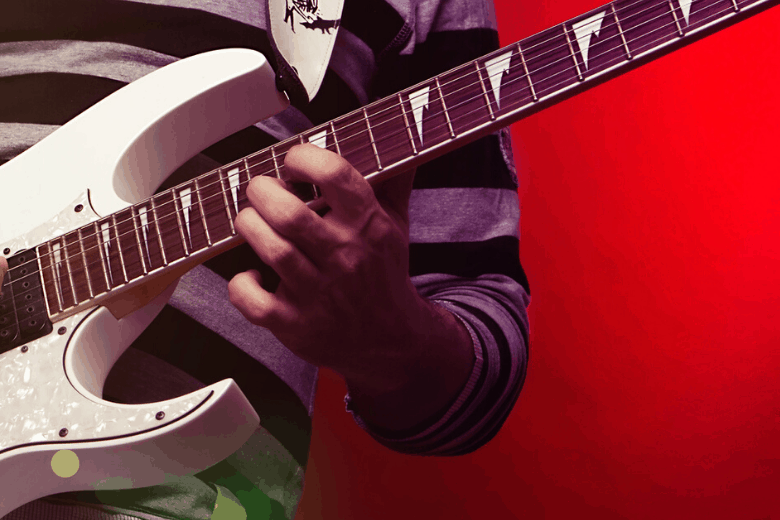 In the 1980s, guitar technique became much more extreme (such as shredding). The era produced many unique inlays to complement the aggressive, sharper sounds of metal music. Sharkfin inlays are perhaps the most popular option, which looks like a distinctive shark fin, often found on guitars built for playing metal such as Jackson.

The sharkfin inlay became so popular, Jackson came out with reverse shark fin inlays to mix things up a bit, while other models feature giant fins that extend across the width of the fretboard. They’re available in varying materials and sizes, but commonly made from abalone, alumiloid, or pearloid.

Unlike the other options, neoclassical fretboards don’t use inlays.

Some people may find this design to be boring, but other prefer to sleek look of an entirely clean fretboard. Many neoclassical fretboards do include side dots for your convenience, However, trained guitarists don’t need the help of guitar inlays while they play anyway.

Custom-made inlays can appear nearly anywhere and in any form. Sometimes they’re dragons, Japanese cherry blossoms, science-fiction landscapes, or anything else you can imagine. They’re placed on the body, front, back, side, the sides of the neck, and even around the soundhole — anywhere you can fit it.

Other times, companies use inlays to place their logo on the instrument.

As customization becomes cheaper and more widely available, many more people have access to custom made inlays. Many companies also started to produce higher quality inlay stickers that anyone can use at home as a result.

Inlays are mainly made from seven different materials. Wood and plastic are the most common. The cheapest guitars will simply use paint to draw on the fret markers.

Options made from clay are typically a polymer mixed with clay, which adds strength and resistance against humidity or impact.

Two common types of marine life shells are used to create today’s guitar inlays: nacre and abalone. Nacre is often called the “Mother of Pearl.” It comes in various options and colors, including black, white, and gold.

One of the most common material used as an inlay, wood designs are often artistic. They’re most common on limited edition, high-end, vintage, or custom-made guitars. You may see wood inlays in a design spanning the entire front and sometimes even the backside of the instrument. They can come in exotic woods.

Plastic is a budget-friendly material used for many products. There are a huge amount of plastic types that create inlays, including these common options:

Rare gemstones of all types are used for guitar inlays. However, they’re often replicated with a cheaper plastic material to cut costs.

The most inexpensive option, sticker inlays are widely available. They get the job done for a fraction of the price. High-quality inlay stickers don’t require you to hire a luthier to install them, so they’re an ideal option for anyone who wants to add inlays at home.

The newest type of guitar inlays, Luminlay is a company that makes phosphorescent fluorescent plastic. Unlike other types, this material glows in the dark. You charge them using a tiny pocket-sized LED bulb that powers up through the battery between songs. It’s ideal for a player who has difficulty seeing the inlay fret markers while on stage.

Guitar inlays have changed so much over the years that today there are so many options to choose from.

If you’re a beginner and use the inlays to help you play your chords still, stick with the dots. Anyone with eye trouble may benefit from the larger sized dots or blocks, while playing on stage in the dark is ideal with a glow in the dark options.

We hope you’ve enjoyed this article. Thanks for reading 🙂