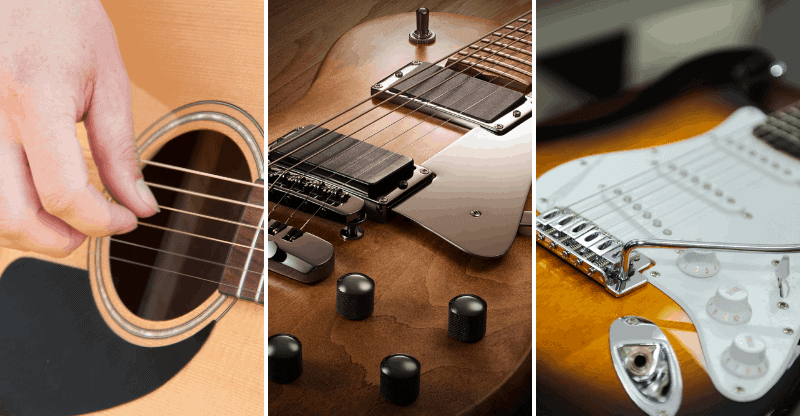 A guitar pickguard (also known as a scratchplate, finger-rest, or scratch guard) is a thin piece of material positioned below and sometimes above where the strumming hand strikes the guitar.

It is used to protect the instrument from getting marked by the pick or fingernails during strumming, but as we’ll see, it has some other benefits besides protection.

In this article, we will walk you through the different types and the most common materials used.

As we’ll see, there are a few types of guitar pickguards, and each one adds something unique to the look – and even the sound – of a guitar. 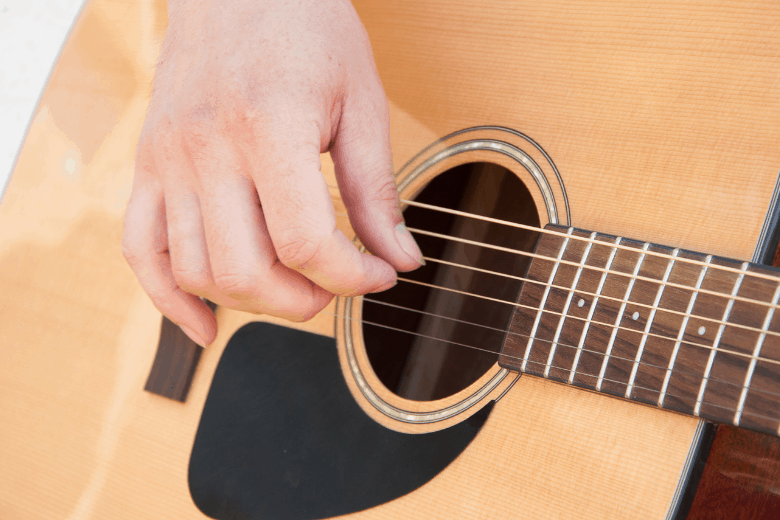 Acoustics usually use a thin (2 mm) sheet of plastic for a pickguard. Its thinness is vital for two reasons. Firstly, if it’s too thick, it can dampen the tone, and when a natural tone is one of the most important things when it comes to acoustic guitars, you want to avoid that.

Secondly, an overly thick pickguard can reduce the vibration of the soundboard (the upper part of the guitar) and reduce the volume and projection of the instrument.

It’s attached with adhesive and positioned just below the soundhole. 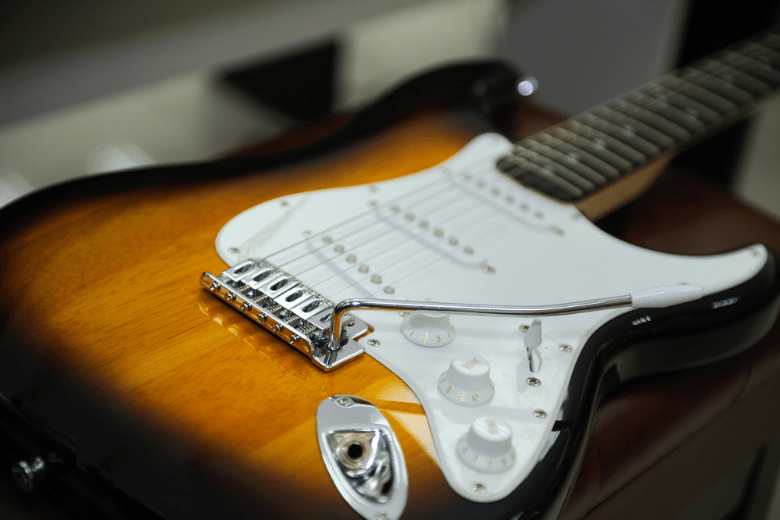 Solid-body electrics often have the ‘Fender-style’ plastic pickguard covering a lot of the surface area (including even a large part of the top surface).

As well as protecting the finish getting damaged during play, it acts as the access point to the guitar’s electronics (pickups, potentiometers, etc.), or via a back access panel if the pickguard is smaller. 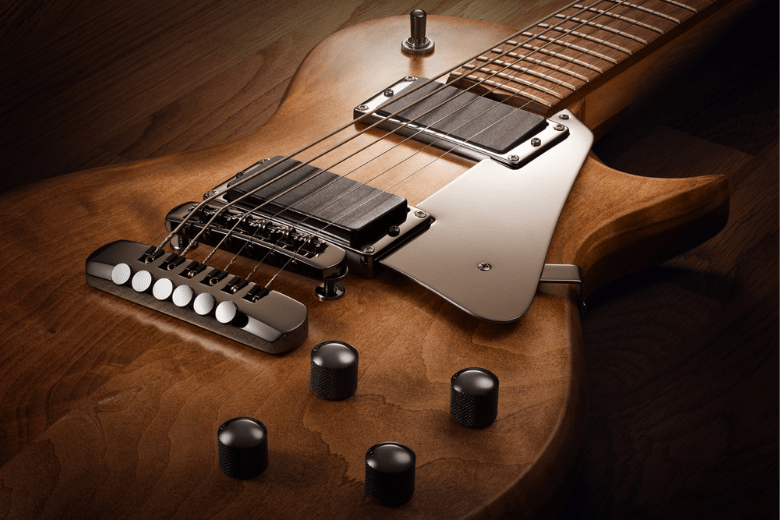 The floating pickguard is raised slightly on one side by metal support brackets and allows for the height to be adjusted to suit your playing position.

It’s typically found on carved top solid body guitars, most famously seen on the Gibson Les Paul (they invented it back in 1909) and many LP Copies.

It can also be found on many archtop hollow-body guitars such as the Gretch Chet Atkins Country Gentleman. As such, it is also known as an ‘archtop pickguard.’ The Guild archtop jazz guitar also has a floating type, with volume control mounted on top. 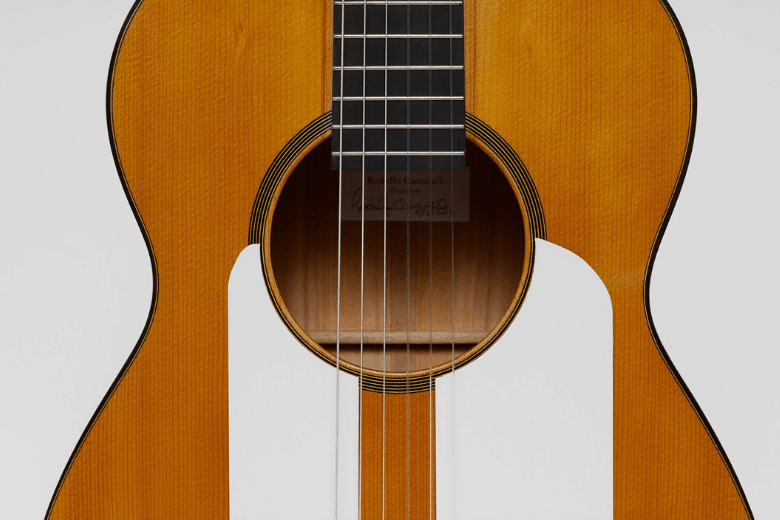 The Golpeador (literal translation: ‘hitter’ in English) found on Flamenco guitars is fitted above and below the soundhole. It is used for percussion and tapping out rhythms with the fingers and palms.

It is not technically a pickguard at all (contrary to what many believe).

The most popular material these days is plastic as it’s relatively cheap and easy to work with. Plus, it has a limitless range of colors and textures.

Before the days of plastic, celluloid was used, so you find it on many vintage guitars. It’s rarely used today as there are far cheaper, better alternatives out there that don’t pose a fire risk (celluloid is highly flammable and can easily set alight). Plus, it tends to shrink and change shape, which isn’t ideal.

Other, more obscure materials include:

As we’ve already mentioned, its main job is to protect the body from getting a beating, as a plectrum can easily damage the polished finish of a guitar.

But what other purpose do they have?

Many variables make up the tone of a guitar, but does the pickguard change the tone? If it’s a hollow body acoustic guitar with a resonant body chamber, the answer is yes, to some extent.

The more resonant a guitar is, the more the type of scratchplate you have affects the natural tone (and even it’s amplified tone). Hence, archtop guitars typically carry the floating pickguard variety, as it doesn’t dampen the tone as much.

It’s not just the archtops that are affected, either. The 1965 Gibson Hummingbird got a bad reputation as the thick pickguard was dire for tonality (it dampened the tone), even though it had looks to die for.

A solid body electric is indeed less affected, as tone mainly comes from strings, pickups, type of neck joint, type of bridge, electronic components, nut, and the overall weight of the instrument.

However, not always. It turns out some makers deliberately omit the pickguard from their guitars. For example, many Superstrat style guitars tend to omit it to maximize sustain and reduce dampening.

While they mainly have a practical application, they also have a role to play in aesthetics and design.

Some scratchplate designs contribute enormously to the look of the guitar, helping to contrast colors (a white scratchplate on a dark wood body, for example) or with a floral inlay design (see the Gibson Hummingbird pickguard above).

When playing fingerstyle acoustic guitar, the scratchplate – as well as the rest of the body of the guitar – is often used for tapping out a beat, especially hitting the third beat as a makeshift snare drum.

It’s common to see a signature on the scratchplate is its a signature model guitar. Signed pickguards are easily attached and moved to another guitar, or sometimes sold separately as memorabilia.

With some electric guitars such as the Fender Stratocaster, the electronics sit behind the pickguard  – you remove it to access the potentiometer electronics.

So, there you have it. Quite about more to them than you would think!

Finally, one thing people often wonder is whether you should take the plastic off a pickguard on a new guitar.

The short answer is yes, but there’s no rush. Sometimes it’s nice to keep it on, but once it the corners start to curl, I’d take it off. Here’s a quick guide for peeling off the pickguard film without damaging the guitar.