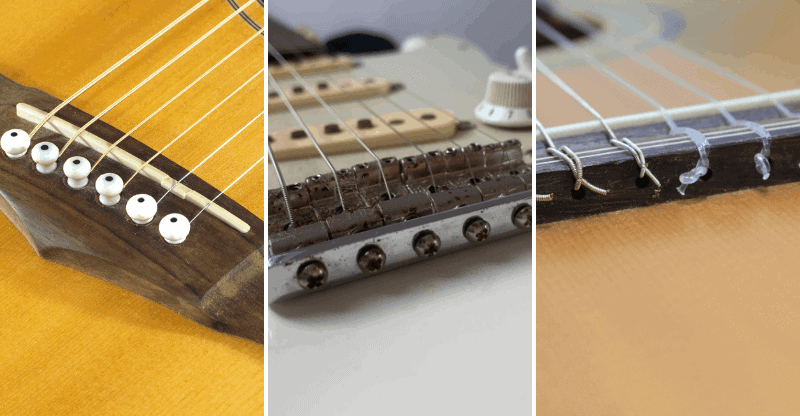 The saddle is one of two places on the guitar where the strings come into direct contact (the other being the nut at the headstock end of the guitar). As such, it plays a significant role in the action, intonation, and even tone of your guitar.

When it comes to acoustic guitars, there are two main types used: a straight (or ‘uncompensated’) saddle and what’s known as a compensated guitar saddle.

What is a Saddle?

On an acoustic guitar, the saddle is a 2” to 3” thin strip of material (see below for a list of the common materials used) set within the wooden bridge. It comes into direct contact with your strings, and as we’ll see in this article, affects action, intonation, and even the tone of your acoustic guitar.

Electric guitar saddles are a bit different from their acoustic counterparts. They are mostly integrated into a metal bridge with dedicated (per string) height and length adjustment controls.

What Does the Saddle Do?

Generally speaking, the further up the neck you go (towards the 12th fret) you go, the higher the string height. High string height isn’t necessarily a bad thing (gypsy jazz guitarists intentionally keep their action high, for example) but most players prefer to keep the action low as it makes it easier to play the guitar as you don’t need to apply so much pressure to fret notes (which makes lead work a lot easier).

By removing a bit of material from the underside of the saddle, you can drastically change the action, and consequently the playability of the guitar.

The saddle has a large bearing on intonation. Intonation is the accuracy of the pitches produced when you fret at different places on the fretboard. For example, when you play an open D string and play the D note on the D string at the 12th fret, the notes should be the same. If they are not, you can move the saddle back or forward until they’re the same (this is easier to do on guitars with floating bridges)

As with nut materials, the material the saddle is made from has an impact on the tone of the guitar. In fact, as Andy Powers from Taylor guitars explains below, the material used in the saddle has a far greater effect than the nut.

Found on acoustic guitars, drop-in saddles sit in a routed slot in the bridge. These saddles are typically not glued in, meaning you’re free to take them out and lower them should you wish (lowering is done by cutting or filing away material from the bottom).

A variation on the drop-in is the long set saddle that is, in contrast, glued into place and extend into the wings of the bridge to avoid movement. If you need to remove one of these saddles for adjustment, you have to heat up the glue attaching it to the bridge (using a hairdryer or similar device), paying careful attention not to heat up the guitar’s finish or you’ll damage it.

We’ve all seen this type of saddle. It’s a straight saddle that doesn’t have any grooves and is flat across the crown (the crown is the point on the top of the saddle where it touches the strings). You might have seen it one on a classical guitar and many steel-string guitars have them too.

So, why an uncompensated saddle? Well, it’s two reasons really. First, nylon strings hold intonation better than steel, so they don’t require the compensation on the higher strings. Secondly, tradition. Classical guitar saddles have never been compensated, and it’s sort of stuck! 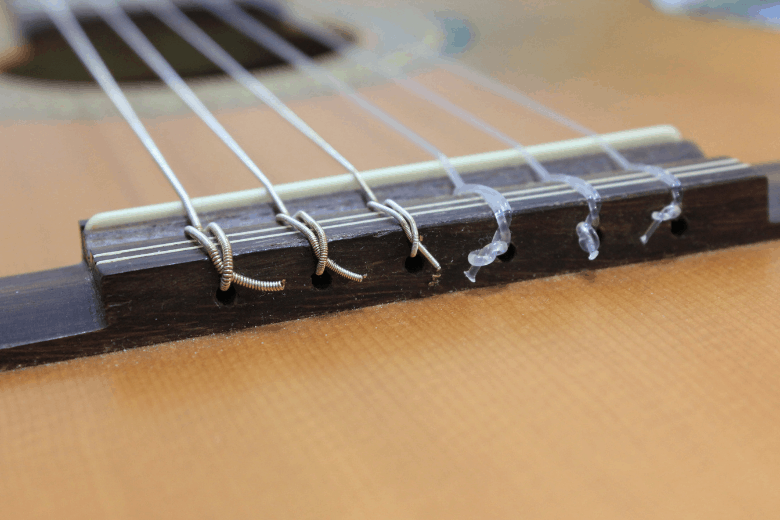 The compensated saddle is quite different and can easily go unnoticed.

Take a look at the picture below and notice how there’s a slight elevation molded into the right-hand side of the crown (the treble side).

As strings are pressed down on the fretboard, the various thicknesses of the strings affects the downward distance the string travels before it hits the fingered fret.

Thie variability can throw off intonation for the higher strings. A compensated saddle with an elevation for high E and B strings helps normalize the effective string length and helps the guitar sound in tune with notes played higher up the fretboard.

The high B string is often the one to get most compensation, as it’s quite a thick plain-steel string and needs a bit more length compared to its neighbors. 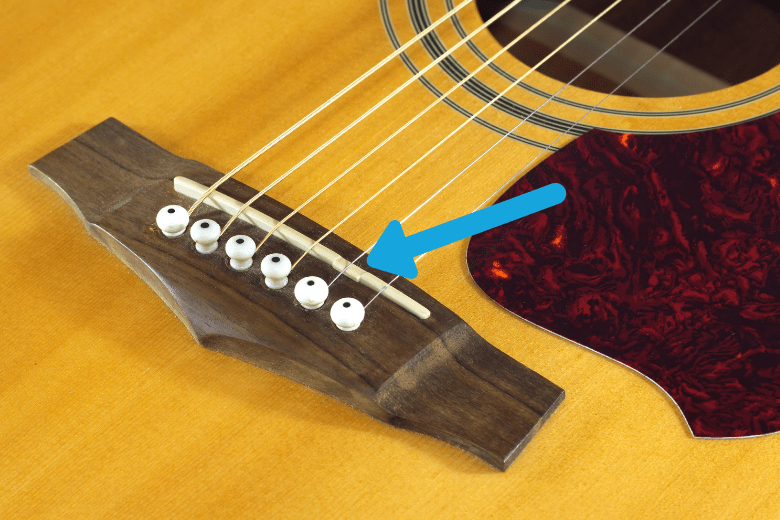 As we already mentioned, the type of saddle you find on electric guitars differs quite a bit.

Here’s an example of one on a Fender Strat. The length of each length can be lengthened or shortened by screws on the backplate, making fine adjustments much easier.

Here’s the same saddle from above, where you can see the higher strings are set at a slightly longer length.

Not every electric guitar has individual saddles per string. The Telecaster famously has a 3-saddle assembly that shares front-back adjustments for all 6 strings but still has discrete height screws to adjust up and down (to alter action).

The material the saddle is made from is often overlooked as a contributing factor to the sound of a guitar.

As you heard from Andy Powers in the video above, different nut materials change the sound of the guitar, but not nearly as much as the material of the saddle. Once you pass the open string, the nut doesn’t have any impact on the tone, whereas the saddle is still at the other end of the strings.

Bone is usually the standard in high-end guitars, as it’s hard, dense, and transfers sound to the soundboard rather efficiently. It’s known for its bright, crisp sound. The downside is it can be tonally inconsistent.

For aesthetic reasons, bone is sometimes bleached. While bleached bone may look better, it’s generally considered that natural bone is superior (bleaching allegedly strips the material of some of its natural lubrication).

For years, guitar makers have made saddles out of plastic. For reasons of cost, plastic is most common, with synthetic plastics such as TUSQ, ‘nubone’, and micarta popular too.

Fossilized ivory is from animals that died naturally a long time ago (millions of years ago). For obvious reasons, they’re far more expensive than the other options as they’re harder to source, but they do produce a more mellow sound than bone. Non-fossilized ivory from elephant tusks is illegal.

As we’ve seen, the saddle plays a significant role in setting up the action and intonation of a guitar, as well as contributes to the tone.

Next time you pick up your guitar or go shopping for a new one (lucky you!), take a second look at it and try and figure out what type of saddle it has.