Types of Ukuleles – An Orientation Guide for Beginners 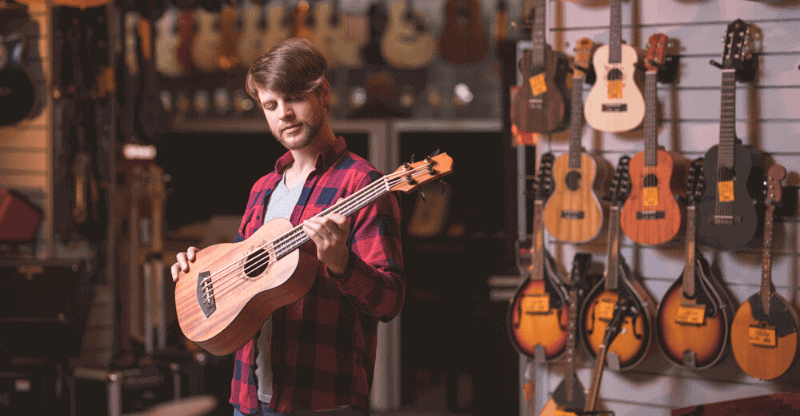 If you’re considering learning the ukulele, you’re going to need a ukulele. It’s hard to argue with that!

As a beginner, it’s easy to get a bit confused by the many different types of ukuleles out there, each with its own distinct characteristics.

In this article, we’ll help you work out which is most suitable for you.

The Main Types of Ukuleles

First, take a look at the graphic below. These are the four main types of standard ukulele sizes (from smallest to largest: soprano, concert, tenor and baritone). 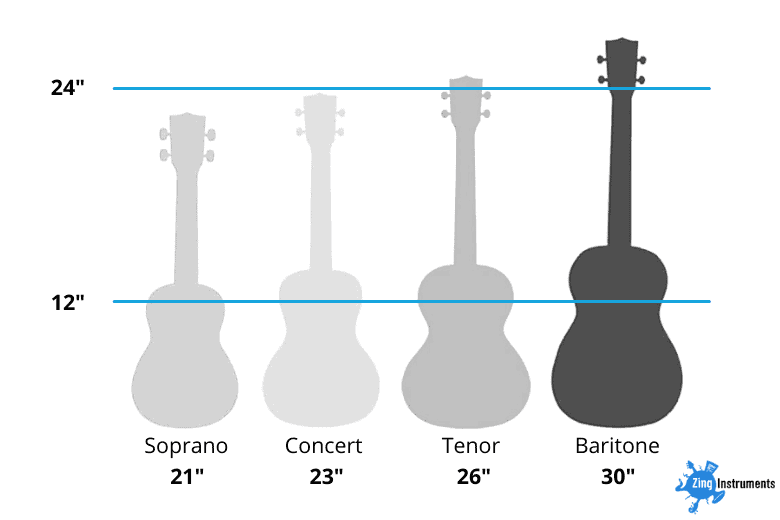 There are many other types that we’ll explore later, but for now, let’s focus on these four.

The sound of the Soprano ukulele is what most people associate with the sound of a traditional ukulele: plenty of treble, cute-sounding, some might say ‘plinky’.

The soprano size is around 21” in length, and a scale length of around 13-14”. They are the smallest of the standard size ukuleles.

Most standard soprano ukes have 12 frets that are spaced ¾ inch apart.

Thanks to its tone, the soprano ukulele is the most popular size among musicians, as they produce an authentic, ‘plinky’ sound, that everyone associates with traditional Hawaiian ukulele music.

Thanks to its small size, the soprano ukulele is a perfect choice for kids too. People with larger handspans should opt for one of the larger ukes we mention below.

The soprano has still been used widely in pop music around the world. Artists such as Ohta-San of A&M Records, the singer-comedian George Formby, and Hawaii’s famous ukulele player Ernest Ka’ai all use or have used this type of ukulele.

Concert ukuleles are the median instrument between soprano and tenor models, and usually, have a total length of 23” and a scale length between 15/16”.

Typically, the concert ukulele will also have between 15-20 frets and a longer neck than a soprano, making them a great option if your hands feel squashed playing a soprano, but stretched playing a tenor.

Because the body is a little larger than a soprano, medium-sized players often find concert ukes more comfortable to hold than petite ones.

Concert ukuleles usually come as standard shaped, rather than the pineapple design, so resemble a small guitar in terms of aesthetic.

Just remember, that even though concert ukes are tuned to GCEA (same as the soprano uke), they have a fuller sound with more bass and depth.

Tenors are larger than concert size, with a total length of 26” and a scale length of between 17/18”. They’re quite versatile too, as you can tune a tenor ukulele to the traditional GCEA system among other rarer tunings such as Canadian D Tuning.

If you want to learn traditional, fingerpicking techniques, on a uke with wider frets, a tenor is a great option for you. They might not be the best option for complete novices, as the body and neck can be a little beefy to get your hands around.

Just remember that, because the body is larger than soprano and concert models, the sound a tenor produces is a little more complex and richer than the traditional tone. That said, they kick out way more volume and resonance than smaller ukes, so they’re especially good for live performance.

To give you a taste of how one sounds, here’s the marvelous Jake Shimabukuro playing a tenor uke:

Now we move on to discuss the largest of the lot, the baritone ukulele. This instrument usually has a scale length ranging between 19/20 inches, with a total length of 30 inches. In regards to tone, the baritone size produces the lowest frequency and is the most resonant.

The baritone usually has 18 frets and crucially the tuning is different (DGBE instead of GCEA) which means there is a whole set of unique chord shapes for the baritone uke. It is in fact the same as the guitar without its two lowest strings. For this reason, it makes them much easier for a guitarist to run with (check out our guide to ukulele vs guitar for a comparison).

This tuning makes it a little harder for traditional style ukulele players to pick up. You’ll end up having to either learn some extra theory or transpose standard ukulele riffs from GCEA.

The larger size body and frets make the baritone a more comfortable choice for larger builds, though these ukes do lack some of that characteristic tone.

So those above are the ‘standard’ types. We’ll now look at some of the more obscure variations.

Sopranino ukuleles are smaller versions of the soprano model (see above) with a scale length of about 13”.

They have a tiny body and frets, making them a charge for some adults, but make them ideal for children. Tone-wise, sopraninos sound nice and bright, as you’d expect from an instrument this size.

Sopranissimo / Pocket Ukulele
Even smaller, the Soprinissimo or ‘pocket ukulele’ has a scale length of around 11″ and a very petite body. Of course, this means you don’t get the diversity of notes that ukuleles with longer scale lengths have to offer.

Thanks to their size, sopranissimo ukes are amazing for traveling, hence why they’re also called pocket ukuleles.

In regards to tone, they are the ‘twangiest’ of all the ukes, with the least sustain and volume.

Due to their size, playability can be a bit of a challenge especially if you have large fingers. Playing chords and scales on these instruments requires some pretty decent finger dexterity or a least the player to have small fingers.

For this reason, pocket ukes are great for children.

We’ve seen how small they go, how about you want something larger?

With a larger neck and longer scale length, there is a greater distance between the frets making vastly improving playability.

Bass ukes are pretty much an extra-large baritone, but with thicker nylon strings, tuned to EADG like an electric or acoustic bass guitar.

The great thing about this design, however, is the instrument’s portability.

Lugging a double bass around certainly isn’t fun, whereas carrying a bass uke is much easier. Unsurprisingly, the tone these things kick out is low, thick, and muddy, as you’d expect, but with a decent amount of resonance and volume.

Bass ukes make a great addition to an acoustic band or an ensemble, but remember, the extra-wide strings will probably feel uncomfortable to play if you have petite fingers, or are a complete beginner.

How about a hybrid ukulele and guitar? Enter the Guitalele. A six-string instrument (as opposed to four strings). It’s the same size as an acoustic guitar but tuned like a Ukulele (GCEA on the high strings and to AD on the bottom two strings).

This lets you can play traditional-sounding uke songs, with the comfort of a guitar.

Because the body is pretty huge, it produces a beefier tone than concert and tenor ukes, with tons of volume. Overall, we’d recommend this uke to any guitarists, wanting to experiment with different tones, or to folks with larger handspans, that feel uncomfortable on smaller models of the ukulele.

The pineapple shape was designed by Samuel Kamaka in the 1920s, as a variation on the original soprano. You’ve probably already gathered that this instrument resembles a pineapple in terms of shape, with a slightly tapered end near the neck and a wider base. But as well as looking cool, Kamaka went through all this effort, so that he could play a soprano-sized uke, with a louder, more mellow sound.

This works because the resonation chamber in a pineapple uke’s body is larger, so they sound a little fuller than the standard soprano.

Just bear in mind, that vintage pineapple models are quite hard to find, or are sought after collector’s items, whereas modern takes on them are still made for a lower price by a handful of manufacturers. Also, remember that pineapple ukes don’t have the waist groove that standard sopranos have, so may take a little getting used to in terms of playability.

If you listened to a musician playing the same arpeggio on a soprano, concert, tenor, and baritone ukulele, you’d hear a difference in tone.

This is mostly down to the ukulele anatomy: smaller soprano ukes produce music in a much higher pitch than say, a tenor or a baritone.

But why the big difference in ukulele sound? Well, larger-bodied models have a bigger resonation chamber, which means they produce lower sound frequencies.

Which Type of Ukulele is Best for Beginners?

We hope you’ve enjoyed this read and feel like you understand the different types of ukuleles a little better.

Still can’t decide on which of the ukulele sizes to go for?

If you’re after a traditional Hawaiian tone, then go for a soprano in either pineapple or standard shape. A soprano uke will give you that authentic sound.

On the other hand, if you’ve got to travel a lot, or want to take your uke to the beach, go for one of the pocket-sized or sopranino models. These are the smallest designs out there, so won’t weigh you down.

If you’ve got a larger handspan or feel uncomfortable using sopranos, then try out either a concert ukulele, or a tenor ukulele. These designs offer extra comfort and playability through the wider frets and larger body.

If you can already play the guitar, then check out the baritone or even a guitarele. As these follow the same tuning, they will be easier to pick up and play.

Either way, whichever one you go for, enjoy the ride.