10 Main Types of Violins by Time Period and Genre 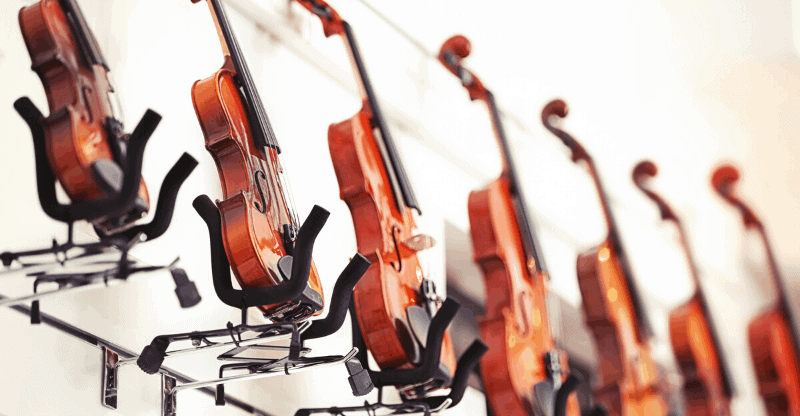 The violin is an instrument that’s been around for a long time. According to National Geographic, the modern violin evolved from the fiddle in the early 16th century. The violin morphed over its lifespan for many different reasons to create the many types we know today.

Violin types may differ based on three main categories:

While these are the three main ways violins are split into types, the instrument is generally unique. Each instrument varies in size (more on this later) and the shape of the bridge may also affect how the instrument plays (a flat bridge is ideal for fiddles while a curved bridge sounds more acoustic, for example).

An instrument’s quality also varies based on brand, country of origin, the wood types, and whether it has a single or two-piece back.

Use the information to find when each violin type was created and the key differences between each.

Types of Violins by Time Period and Genre

Before the violin’s invention, pre-baroque-era stringed instruments were common. These options are similar to violins. Sometimes people even refer to them as early types of violins. However, they’re considered separate instruments.

You hold them upright while playing the three strings, using your chin to hold the instrument in place. The three-stringed violetta is one such option that predates the violin.

The Baroque violin, created in the 16th century, was the first standardized violin. The art of making stringed instruments met an all-time high during this era, as the age triggered a musical revolution, according to the Corilon Violins’ library. Today, it’s considered the forefather to the modern type of violin.

Unlike other types, the Baroque variety has a shallower and thicker neck angle to support string tension. The tension is lower than classical ones too. However, many were altered in the 18th century as traditional crafting standards changed.

Although many of their models range back to the 15th or 16th centuries, the instruments are still played today. Some models even sell for millions of dollars.

The modern violin is known by many names, such as the classical or acoustic violin, and is the type used to play the great violin concertos of the past, by the likes of Bach and Vivaldi.

As new bowing techniques were popularized in the late 18th and early 19th century, the violin increased string tension. The result is a difference in the sound projection and range of the instrument, making a classical violin stand out among other types.

The classical violin also had a slender neck and a high level of string tension. Today, it’s the standard used to assess other violin types. They also offer more comfortable fittings to aid the violinist, such as a chin rest that helps players hold the instrument comfortably.

Lastly, modern violins take on better strings and rosins. The 20th century has improved upon equipment for the instrument, which helps the sound produced by the classical model.

A Stroh violin, also known as the horn violin aka violinophone, is named for inventor John Stroh. Stroh made this violin in the later 19th century, and it features a horn instead of a sound box to create the notes. The timbre is very different than an acoustic violin as a result.

Compared to traditional acoustic violins, Strohs are louder. However, they’re not as popular. The sound is thinner and harsher. They’re similar to the Romanian horn violin, only the horn is wider. They’re also relatively expensive.

A violin that produces sound electronically, the electric violin comes in many styles. Because the instrument doesn’t require a sound box or f-holes to create sound, many models can forego traditional aesthetics from acoustic instruments.

Like electric guitars, electric violins come in various sizes, shapes, and forms. They are gaining popularity over the past few decades, and they’re common instruments in bands.

The electric violin was first sold in the 1930s, but musicians had long been known to play violins with pick-ups before then. Unlike other types, an electric model offers a sound you can distort with amplification. Depending on the genre of music you play, this distortion process can allow you to alter the sound with pedals and other electronics. It’s helpful in innovative music-making.

A silent violin is an electric option. Don’t let the name fool you. They’re not silent. Instead, a silent violin always produces the sound of the bow touching the string. The sound is similar to a normal violin on mute.

The purpose of a silent violin is to allow beginners to practice without bothering the people around you. The sound quality is ideal for earplugs as well, but may not work as well with an amplifier. People only purchase this type of instrument with practicing at home in mind, rather than amplifying the sound on stage.

The semi-electric, as you may have guessed, is essentially a traditional violin that’s fitted with a pick-up to electronically amplify the acoustic sound. The sound retains the original acoustic feel much more than fully electric models can. It’s also called an electric-acoustic or ‘violin with a pick-up’ for this reason.

Unlike an electric violin, the semi-electric option produces sound acoustically. It doesn’t sound loud when it’s not plugged into an amp, like bass or electric guitars. Some models of classical violins are easy to fit with pick-ups to create a semi-electric violin. However, other options require modification to the set-up of your entire violin. For example, some require a hole drilled into the body to install a plug-in.

Five-string violins, as the name suggests, offer the 5th string: the lower C string. They can be electric or acoustic, but they’re often electric. Both types offer a wide range.

A 5-string has the range of a violin and a viola, only in a single instrument. Many 4-string players say it takes time to adapt to using the 5th string, as the bow’s angle changes where you touch each string. They’re fun to play with a low C string bass line and a higher string melody. Note that chords are played differently with these instruments, given they have an extra string.

You’ll see this type of violin as a country fiddle, as it allows the music to reach lower notes. The angle of the bow also leaves less space between the strings, which makes it easier for you to complete double and triple stops (or play two or three strings simultaneously).

A type of violin modified to play a certain style of music, the fiddle is unique. The term fiddle, according to Vocabulary.com, was a slag word that people used before the 16th century to describe how the bowed and stringed instrument was played.

Today, the term fiddle is often used to describe a general type of violin. It’s most common to describe a violin in country or folk music. The fiddle, as an instrument, has a flat bridge. Unlike an arched bow, the flatness allows for easier double or triple stops.

The instrument was first invented in the 1500s by Andrea Amati. It derived from bow instruments in the Middle Ages, according to Soft Schools. When it was first produced, the fiddle was traditionally played at Italian events like funerals, birthdays, weddings, and other holidays among the lower classes.

You may be wondering, “what’s the difference between a fiddle and a violin then?” They’re basically the same thing. The difference lies in the style and context in which the instrument is played. Fiddle music can include countries such as:

Similar to a violin, the viola is played in a similar manner. However, the sound it produces is larger and around a fifth lower. Like the second violin in an orchestra, the viola follows what’s called the middle voice. Some solo concerts use the viola, and the instrument is popular among many composers due to the deep and warm tones.

Unlike other types of violins, the viola is ideal to learn as an adult. Beginners choose to play the viola because it’s great for playing in a group setting and the scores are slightly easier in many different music genres.

In addition to varying based on the year they were produced and the genre of music they’re made to play, violins vary in size so children can learn the instrument. The right size crucial and depends on the length of your arm.

Adult and children sizes both vary in size. These options are called fractional violins due to the recorded fractions that distinguish the different sizes, such as full-size or four-quarter.

Fractional violins come in sizes as small as 1/64. However, tiny sizes are rare. The smallest violin most people purchase is the 1/16. It’s popular among young children, ages three to five. Next, the common sizes above 1/16th include:

However, the fractions don’t relay the way you may think. A ¼ violin isn’t the quarter of the size of a 4/4 violin. The two sizes are actually around an inch different.

To figure out what size is best, measure your child’s arm. Turn the violin backside up, resting the back of the instrument along your kid’s upper left arm. Ask your child to reach the top of the scroll. If they can, they should be able to easily manage the instrument’s size without dropping it or causing arm cramps.

On the other hand, playing comfortably may require a larger size for adults. Adult-sized violins are regularly 4/4. If you find yourself trying to stretch your pinky finger too much to reach the notes or have shorter arms, you may prefer a smaller ⅞ size. The ⅞ size is commonly referred to as a “lady’s violin,” but the smaller size can be much more comfortable to play.

As they learn, children around seven to ten tend to skip the ⅞ size altogether and head straight from playing a ¾ to a 4/4 violin size.

For more help on picking the right size for you or your child, check out our guide to violin size here.

The best type of violin for you may depend on how much money you plan to spend on your instrument as well as the genre of music you hope to play. Consider the sound you want to produce and where you’ll play the instrument most often. Then, make sure the violin is the right size for you.