Know Your Parts! A Beginner’s Guide to Ukulele Anatomy 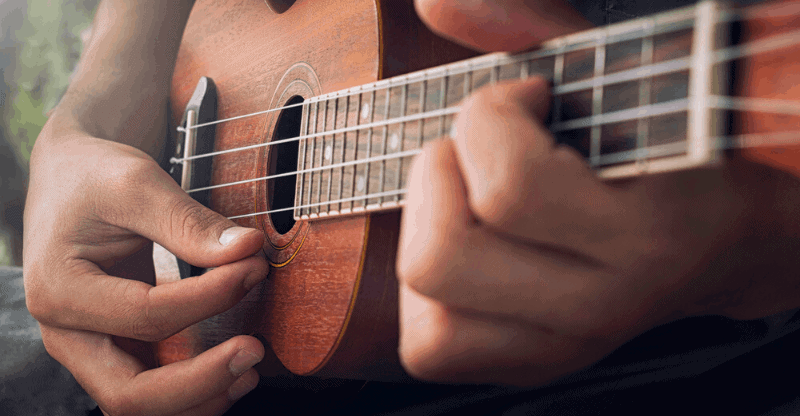 If you’ve only just started learning ukulele, it’s good to know your way around the different parts of the instrument – for sake of argument, let’s call this ‘ukulele anatomy’.

Why? Well, understanding what the parts of the ukulele are called (and what they do) will not only help with tasks such as tuning and restringing but also general maintenance.

Plus you’ll know what the guy or gal at your local uke jam is talking about when they say your “bridge needs adjusting”!

In this article, we run through the anatomy of a ukulele.  Note, the diagram below shows a soprano ukulele but these labels are relevant for any ukulele size or type. 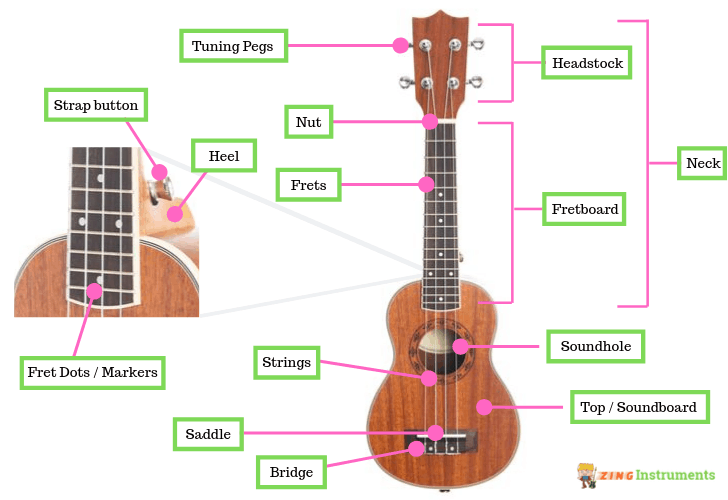 We’ll now list the parts of the ukulele and explain each one.

The body of the ukulele is made up of several different pieces: the top also called the ‘soundboard’, the back, and the sides. These parts are glued together and work to amplify the vibration produced by the strings.

These sections are usually made out of solid wood or laminate, all of which have a dramatic effect on tone.

There are many types of woods ukuleles are made from, including tonewoods such as mahogany, cedar, rosewood, and maple, as well as more exotic woods such as the beautiful koa or the stripey zebrawood.

In terms of shape, a ukulele’s body usually features an ‘upper bout’ and ‘lower bout’. You can think of the upper bout as the instrument’s shoulders and the lower bout (its hips) that is used to hold the ukulele.

You can also find cutaway bodied ukes too, that have part of the upper bout reduced so you can play the top frets more easily, much as you would a cutaway guitar.

The top of the ukulele is the part of the body that faces the audience while you play. Here you’ll find a cutaway soundhole in the central area of the panel; this lets the amplified vibrations project out from the instrument.

It is not unusual to find a rosette inlay around the edge of the soundhole too, which helps to strengthen the edges of the wood and add to the aesthetics too.

With more expensive ukes, you often find something called perfling, also known as ‘marquetry’. This is a dense wooden lining (or ‘trim’) that curves around the edge of the top and sometimes the back of the instrument, to provide some extra support against warping, knocks, or bangs.

Additionally, if you look inside the soundhole of some ukes, you’ll also find what’s known as bracing. Bracing consists of narrow lengths of wood that are attached to the inside of the instrument which helps to strengthen the uke.

The back is, as you might have guessed, at the back!

This section is sometimes constructed from a different type of wood than the top. For example,  a hardwood like mahogany is often used in the instrument’s back and sides, whereas a softer wood like spruce is often used for the top.

The back often undergoes a manufacturing process known as ‘bookmatching’. This is when the wood is cut symmetrically so that it opens apart like a pair of wings and keeps an identical grain pattern.

The ukulele’s back panel can also be slightly curved outwards so that more there is more resonance in your sound.

If you look inside a ukulele through its soundhole, you’ll spot the label.

This is basically a sticker, that tells us information, such as the instrument’s manufacturer, date of production, serial number and make.

Historically, especially with classical guitars, the luthiers that hand-crafted the instruments would sign their name on the label. This meant that the instrument’s owner knew who had made it, in a similar way that an artist signs a painting.

The bridge is typically glued to the uke’s top near the base of the ukulele’s top and secures the strings in place as well as transfers their vibrations into the body wood.

There are a few types of ukulele bridge:

The saddle is a strip of material, placed on the side of the bridge that is nearest the soundhole.

Its purpose is to keep the strings in the correct position (at the right height above the fretboard); in a similar manner to the nut (see below), but at the opposite end of the instrument.

This is important as having an action that is too low can result in string buzz, whereas having it set too high can make pressing the strings down tough on your fingers. In regards to structure, if you take a look at a saddle close up, you’ll notice it has four tiny grooves across its surface, which are used to secure the strings in place.

The neck extends from the upper bout of the instrument’s body, right up to the headstock, nut, and tuning pegs.

Necks can come in different shapes, for example, some are a C shaped, whereas others are a D or U shape in regards to their curvature. According to the shape, the playability in your fretting hand can feel slightly different.

The type of wood used can also vary and is often different from the instrument’s body and fretboard.

The heel is the part that connects the bulk of the neck with the body of the instrument.

Usually, the neck’s wood at this point curves outwards slightly, so that its thickness matches up with the depth of the body.

Additionally, you’ll often find the strap button attached to this area, which allows you to attach a strap – just remember, you’ll need to secure the other end of the strap over the tailblock button too!

The fretboard is a smooth, single piece of thin wood that is glued onto the front of the instrument’s neck.

Manufacturers have followed tradition here by keeping the board black or dark brown. This coloration choice is a sort of ode to the dark hardwoods that were initially used in earlier models.

Nowadays, ukulele fretboards can be produced from a number of different woods however, the most common type is rosewood, with pricier instruments incorporating things like super silky ebony. Tone-wise, rosewood is warm, whereas ebony and maple sound that bit brighter.

Fixed to the fretboard, you find the frets. Frets are raised metal strips, with the lowest pitch fret closest to the uke’s headstock and nut, and the highest positioned next to the soundhole.

The spacing between the frets also becomes smaller as the string length decreases and the difference between semi-tones gets shorter. Ukuleles are quite diverse in terms of scale lengths and can have as little as 12 frets, to as many as 19 frets, depending on the size.

These are small inlays, usually made from white plastic, abalone, or sometimes even pearl in high-end models.

Fret dots are ‘anchoring points’ and are usually found on the third, fifth, seventh, tenth, and twelfth frets (although there may be an extra one on the fifteenth fret on ukes with a lot of frets).

What do they do? Well, they help with navigation and are particularly useful for identifying notes on the fretboard, and of course for playing scales and chords.

Luthiers often put dots on the side of the instrument’s neck too (known as the trim) for extra visibility.

The headstock is a solid piece of tough plastic or wood that supports the tuning pegs and needs to be sturdy enough to withstand the tension produced by the strings.

It’s found at the furthest point from the body and occasionally features the instrument’s decal (brand name) in its center.

There are two types of headstock known as; ‘standard’ and ‘slotted’.

There are four tuning pegs (known also simply as ‘tuners’) to secure each string into. To attach a string, you have to feed the string through a hole in the string post and turn the peg, so that the string wraps tight around itself.

Usually, all the tuners will extend either behind or sideways from the headstock, depending on the particular brand of uke you’re playing.

In terms of material, tuners are usually made from either tough plastic or metal, as they need to be able to withstand the high pressure from the strings.

There are two types of tuning peg:

The nut is a thin piece of material that lies between the fretboard and the fingerboard.

The nut is similar to the bridge’s saddle, in that features narrow grooves that hold the strings in place evenly, before they enter the tuning pegs. It’s also designed to raise them away from the fingerboard by just a couple of millimeters so that you get a note when you press down on the strings.

Like all stringed instruments, the first ukulele strings were made from catgut. Nowadays, manufacturers use a variety of different materials, depending on the size of the instrument you’re playing.

The smaller soprano and concert sizes use nylon strings, while the larger baritone ukulele and tenor models use a combination of nylon and metal wound strings that offer a fuller tone (especially for playing lower notes).

As for string names, the soprano, concert, and tenor ukes are typically tuned to G C E A with the A being the first string (closest to the floor) and the G the fourth string closest to the ceiling (this is for right-handed players).

You tune a baritone ukulele differently (to the notes D G B E, the same as the high four strings of the guitar). The 4th G string is tuned an octave up, at a higher pitch than the C and E strings. This is known as ‘re-entrant tuning’ which gives the ukulele its characteristic sound.

We hope this guide has educated you on what things are called at least and has given you a renewed enthusiasm for this wonderful instrument.