Ukulele Bridge Types – Which One is Best? 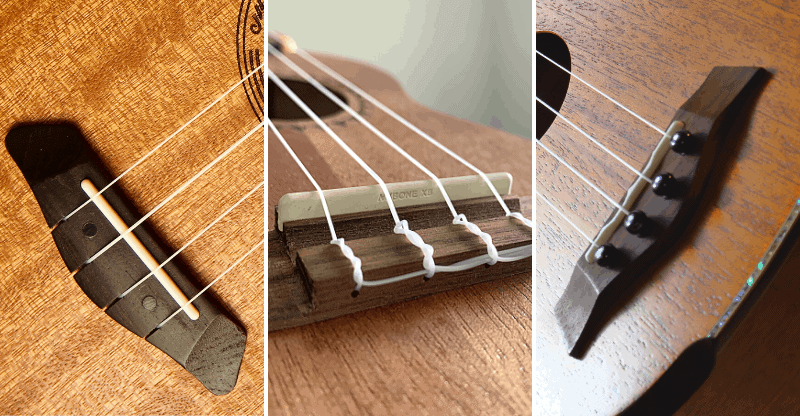 The bridge is attached to the soundboard of the ukulele and is one of the ends where the strings are attached (the other end being the headstock). As such, it’s one of the most crucial parts of a ukulele.

But there isn’t just one type of bridge. As you’re about to find out, there are a few.

If you’re in the process of buying a ukulele, you should be mindful about the type you want, because changing strings is a big part of owning any stringed instrument, and with the ukulele, there’s quite a bit of choice.

Each of these ukulele bridge types has its pros and cons, so in this article, we look at the different types available. This way, you can make a more informed choice when it comes to choosing the right uke for you. 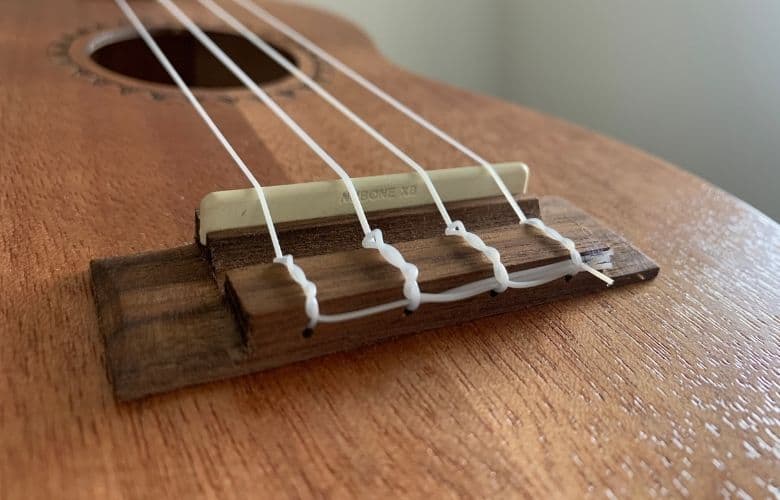 The first we’ll look at is the traditional ‘tie-bar bridge’ or ‘tie bridge’, the sort found on classical guitars. This one is a very simple design and has a bar that the strings are looped around two or three times and then knotted.

You simply thread each string through the hole (on the side closest to the soundhole) and then loop it back around the string to make a knot (known as a ‘classical tie’). The classical tie is a very specific kind of knot, so be sure to learn it.

The number of loops depends on the string (thicker strings you can only wrap around once or twice) and the size of the tie block (larger blocks allow for more loops) which varies according to the ukulele brand.

Once you’ve tuned the strings up to playing tension, you can either simply trim the ends – or, if you want to get fancy, insert the ends into the loops of the other strings as you see in the pic.

Once you get the hang of it, tie bridges are pretty easy to work with – plus when done right, they look neat and even add to the aesthetics of the instrument. If the knots aren’t neatly trimmed though, you can brush up against them when strumming your uke. Less than ideal!

Also, if you’re really struggling, you can also buy bridge beads that save you from having to tie the knots. 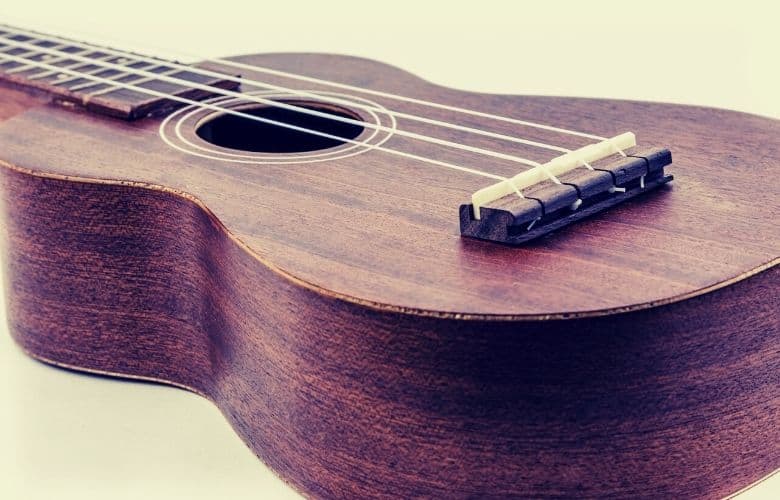 Next up is the slotted bridge. Rather than having to loop the strings around a tie bridge, the strings are simply knotted and slotted in, as you see in the pic.

This makes it really easy to install strings on, and as a consequence is found on a lot of ukuleles these days.

To avoid slipping, so you should use a figure-8 knot which is fatter than the typical type of knot. Here’s a great demo of tieing a ukulele knot, showing you how it’s done. 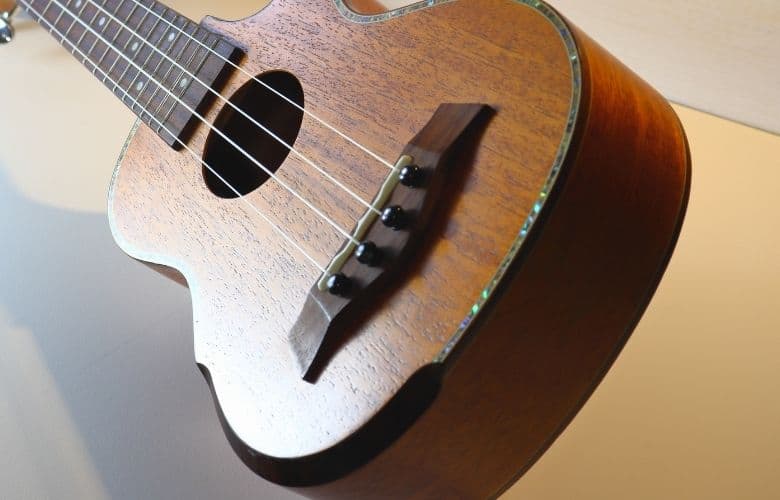 Pin bridges are a type of bridge you usually associate with acoustic guitars, but they are found on some ukuleles too.

The strings are simply held in place by a ball or bead at the end of each string and then secured in place by the bridge pins.

The main benefit is the ease of use, as pin bridges make changing strings really easy, although getting the pins out can be a bit of a struggle. 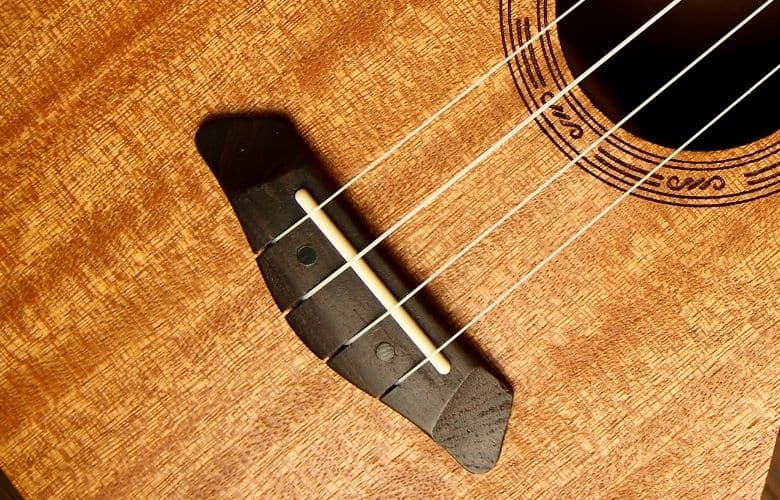 Finally, we have the string through bridge, also known as the bridge-thru or pull-through bridge. It works by feeding the strings through holes that are then anchored by the ukulele’s body.

This type is found on a lot of higher-end ukes, from builders such as Moore Bettah, DeVine, and Pohaku, and is said to improve volume and responsiveness (the break angle over the saddle is slightly increased).

They look really clean and minimalist, plus there’s no way of catching your strumming hand on a stray string end. There’s also no chance of the bridge popping off.

The downside is they can be a bit fiddle some to fit at first, and it can take a bit of practice to fish the string out of the hole. Here’s a good guide to stringing a pull-through bridge.

So which is the best? Well, like everything, it comes down to personal preference.

If you want sleek and elegant, go with a string through. They can be a touch fiddly (fishing the string through the holes) but they look awesome.

The slotted and tie bridges have both stood the test of time. They look great, function well, and are relatively easy to replace. But they do require some knot tieing handiness.

If you have an aversion to knots – and you’re familiar with restringing the guitar, then go with the pin style. These are simple to use and don’t require any boy scout skills!