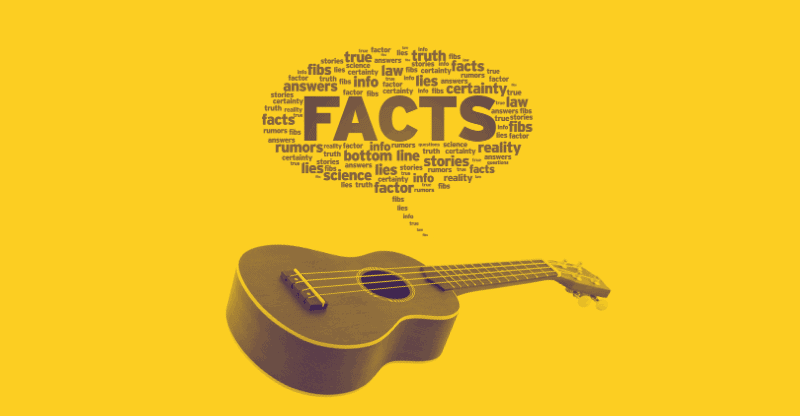 For the past few years, the world has been undergoing somewhat of a ukulele craze.

With good reason too…it’s a fantastic little instrument. What is it about the sound of the uke that spirits us away? No one has a bad word to say about the ukulele – it really is ‘the instrument that can do no wrong’!

But how much do you know about the uke? If you’re like most people, not much.

So here are some of the lesser-known facts about the ukulele.

The ukulele was an adaptation of the Braguinha or Machete de Braga, a Portuguese instrument that was taken to Hawaii by immigrants in the eighteenth century. The first ukulele is said to have been built in 1879.

The way the ukulele is pronounced in the west (you-ka-lay-lee) is not how it’s pronounced in Hawaii (Hawaiians say ‘oo-koo-leh-leh’). The debate rages on around which is the correct way to pronounce ukulele.

There’s even mystery around the meaning of the word ‘ukulele’. Some say the literal translation of ukulele is ‘jumping flea’ in Hawaiian. However, Liliuokalan – the last queen of the Kingdom of Hawaii – translated ukulele as ‘gift from afar’.

There are four sizes of uke: soprano, concert, tenor, and baritone, and even a minuscule pocket ukulele. There are also tons of hybrid instruments such as the guitalele (a mix of guitar and ukulele) and the banjolele (a mix of banjo and ukulele).

Most ukuleles are made of mahogany wood.

On a standard ukulele, there are four nylon strings tuned to G, C, E, and A (the baritone uke is tuned to D, G, B and E – the same as the guitar). Early ukulele strings were made from cat or even sheep gut.

Thanks to its size and form, the uke is one of the easiest instruments to learn with a very low barrier to entry. You can learn to play it in hours (maybe less). Uke chords such as C Major are played with one finger – you can’t get much easier than that!

Plenty of famous musicians such as The Beatles’ George Harrison was a massive fan of the ukulele – he allegedly had a collection of hundreds, and he’d randomly gift them to people. He also urged everyone to learn to play one.

Many famous movie stars have played the uke, including Marilyn Monroe (in Some Like it Hot) and Steve Martin (in The Jerk)

Other notable fans of the uke include first man on the moon Neil Armstrong. On this return to Earth, he spent a lot of time in quarantine strumming his uke! I wonder if he played Space Oddity 🙂

Released in 2008, “I’m Yours” by Jason Mraz remains the top-selling ukulele song of all time, spending 76 weeks on Billboard’s Hot 100 chart. And another interesting fact….it even broke a record for the number of consecutive weeks spent on the charts. It’s pretty easy to learn to play too.

There are also dozens of two chord uke songs that are simple to play too.

The version of Somewhere Over the Rainbow by Israel Kamakawiwo’ole is another popular modern uke song.

The ukulele craze shows no signs of abating and is more popular than ever!

May the current ukulele craze live on!