The 40 Best Ukulele Love Songs to Win Over Their Heart 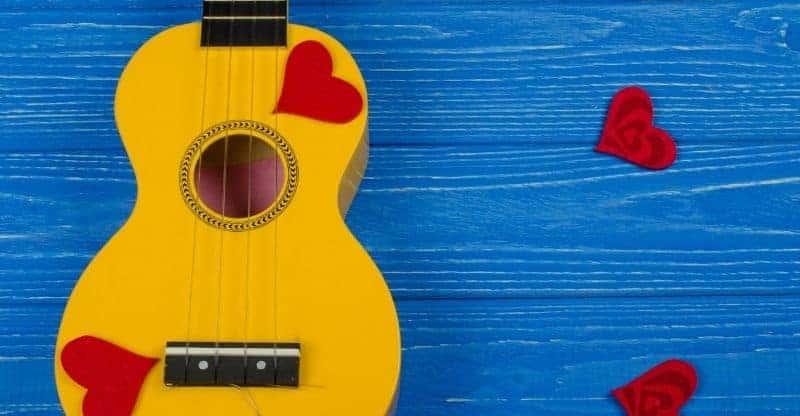 Planning to serenade someone? Awesome.

About to pop the big question? Wow.

Or maybe you’re wedding anniversary is coming around and you want to make it extra special. Good thinking.

Or maybe you want to play a little tune for your son or daughter. That’s sweet.

For any of the above (or another reason completely) you’re in luck.

As well as being one of the easiest instruments to learn, the ukulele is also one of the most romantic.

Here’s our pick of the best ukulele love songs ever written, grouped by decade.

Remember, many of these songs are superb in their own right – they shouldn’t only be left for Valentines’s Day (that would be a waste.)

In the early 1900s, a group of New York music publishers, known as Tin Pan Alley, dominated pop music in the USA. Shine on Harvest Moon was one of many moon-related songs during this time, and continues to be recorded to this day. The likes of Bing Crosby, Isley Brothers, and more recently, Britney Spears have covered the famous track.

Can you imagine the talent that Harry Armstrong must have possessed as an 18-year old when he scored the tune to Sweet Adeline? The song actually failed to take off at first, until a group called The Haydn Quartet performed it in 1904. From there, the song spent ten weeks at number one in the American charts. Sweet Adeline has even appeared in an episode of The Simpsons.

We all know the tune. “Heaven, I’m in heaven.” It’s as catchy as it is famous. It was originally written for the 1935 movie Top Hat in a scene that sees Fred Astaire sing to Ginger Rogers as they dance away. Nominated for the Best Song Oscar the following year, it was inducted into the Grammy Hall of Fame in 2000. Its popularity hasn’t dwindled through the years, with the likes of Billie Holiday, Frank Sinatra, Rod Stewart, and Lady Gaga recording their own versions.

Another tune that has featured on The Simpsons, My Funny Valentine’s place on this list was never in and doubt. Appearing on over 1,300 albums performed by more than 600 artists, how could it not? The fact that it has featured in The Vicar of Dibley and Grey’s Anatomy proves how versatile and well-loved this song is. Michael Buble also did its legacy no harm by recording a version for his 2018 album Love.

But Not For Me

On the receiving end of Fred Astaire’s charm in Cheek to Cheek, Ginger Rogers turns the tables with her stunning rendition of But Not For Me in the 1930 picture Girl Crazy. Any song that is recorded by the likes of Bing Crosby, Judy Garland, Sam Cooke, Elton John, and Barry Manilow is well placed to stand the test of time, and this track has done just that.

A Kiss To Build A Dream On

Originally called Moonlight on the Meadow, composer Oscar Hammerstein changed the name to A Kiss To Build A Dream On for it to be recorded by Louis Armstrong. 16 years passed between the title change, with the likes of Deana Martin covering it in the 21st century.

A funny title? Yes. A song that has maintained popularity for pushing a century? Absolutely. Written in 1934 by Harold Spina and Johnny Burke, My Very Good Friend The Milkman has been covered by both Eric Clapton and Paul McCartney. Not bad company really.

Written in 1945, La vie en rose was released as a single in 1947 after becoming popular the year prior. Originally performed by the popular French singer Edith Piaf, the song reached the US charts with seven different versions in 1970 including renditions by Dean Martin and Louis Armstrong.

Once described by the great Andrew Lloyd Webber as “the greatest song ever written for a musical”, Some Enchanted Evening came to prominence through the 1949 South Pacific. Stars such as Barbra Streisand, Willie Nelson, The Temptations, and Bob Dylan have recorded versions, and yes, this song has also appeared in The Simpsons.

I Could Write a Book

I Could Write A Book is from the 1940 musical Pal Joey, where it was introduced by Gene Kelly and Leila Ernst. It was covered by Frank Sinatra, and more recently, appeared in the Hollywood hit When Harry Met Sally.

Things We Did Last Summer

If you aren’t already feeling nostalgic from all these tunes of yesteryear, you’re about to. The Things We Did Last Summer was written to remind people about times from their past and has been performed beautifully by stars such as The Beach Boys, Sammy Davis Jr, Dean Martin, and even Seth MacFarlane.

In the Still of the Night

In the Still of the Night only actually reached number 24 in the charts when released in 1956, but has risen in popularity since then with the likes of Boys II Men and Debbie Gibson covering it. It can be heard in Martin Scorsese’s Netflix hit The Irishman.

The Penguins were an American doo-wop group in the 1950s and 1960s who released Earth Angel a year after being formed. In 2005, the song was added to the National Recording Registry due to its historical and cultural importance.

Tonight You Belong to Me

Originally written in 1926, this song was revived in 1952 and again in 1956 with recordings by Frankie Laine and Patience and prudence respectively. It has featured in Fear of the Walking Dead and has even been given the Kate Winslet treatment in Blackbird.

Hallelujah I Love Her So

Ray Charles released this classic in 1956 and it reached as high as number five in the Billboard R&B chart. The Beatles and Stevie Wonder have covered it, giving it rejuvenated life on more than one occasion.

Fly Me to the Moon

Did you know that Fly Me To The Moon was originally titled In Other Words? Hard to believe, isn’t it? Perhaps a less surprising fact is that Sinatra’s 1964 version was linked to the Apollo missions to the moon.

Into the 1960s with Spoonful, one of Willie Dixon’s best-known tracks. Later on in that decade, Cream popularised it once more with their version. It ranks at 219 in Rolling Stone’s 500 Greatest Songs of All Time.

I GOT SUNSHINE! We all know that opening lyric. My girl was The Temptation’s first number-one single, and to this probably remains their most famous track. In 2004, it was ranked at number 88 in the previously mentioned Rolling Stones list.

They’ve been mentioned already on this list, but God Only Knows sees the Beach Boys feature for their own song. It was actually released as the B-side to Wouldn’t It Be Nice. Can you imagine a song of that quality being released as a B-side?

I Can’t Help Myself

Sugar Pie Honey Bunch. What a lovely thing to call someone. I Can’t Help Myself was the first song from the Four Tops to reach the UK Top 40. Such was its popularity, La Toya Jackson even covered it in 1995.

Has a rerelease of a song ever performed as well as Elton John’s Your Song? Not content with reaching number seven in the UK charts in 1970, he released it again in 2002 – reaching number four. It was used in John Lewis’ 2018 Christmas advert and covered by Ellie Goulding.

Pattie Boyd can forever say that this beautiful number was written about her. Not a bad brag. Eric Clapton’s 1977 release performed well enough, but has gone from strength to strength over the years, and was wonderfully received when performed at Nelson Mandela’s 70th birthday.

Baby I Love Your Way

Peter Frampton must look back on this song with a certain amount of anguish. In 2017, he admitted that he received less than $2,000 for 55 million streams on iTunes and Spotify combined.

You’ve Got A Friend

Not to be mistaken with the song made so popular by the Toy Story films, Carole King’s You’ve Got A Friend is a classic in its own right. Michael Jackson has covered it beautifully, as well as Dusty Springfield.

I Just Called To Say I Love You

He has a lot to choose from, but I Just Called To Say I Love You is Stevie Wonder’s best-selling song to date. It has topped a whopping 19 charts and won an array of awards.

Another entry for Elton John, and it isn’t difficult to see why. Sacrifice was actually his first UK number one, but wouldn’t be his last. The video portrays the relationship struggles of a man and woman.

Have I Told You Lately That I Love You

Originally written as a prayer, few could have predicted the commercial success that this song would go on to have. Although written and recorded by Van Morrison, Have I Told You Lately That I Love You is also a well-known Rod Stewart hit.

Largely regarded as one-hit wonders, Sixpence None the Richer can be proud of the success that Kiss Me managed. Nominated for a Grammy, Kiss Me reached number one in various nations and features in the 1999 film She’s All That.

I Don’t Want to Miss A Thing

Filmed for the 1998 blockbuster hit Armageddon, I Don’t Want To Miss A Thing is played at weddings around the globe to this day. Celine Dion was visioned to release the track, which is unthinkable now given how popular the Aerosmith version is.

Another rock band making their way onto this list are the Goo Goo Dolls. Iris has, without doubt, contributed to their success over the years, and is credited as being one of the biggest crossover songs between rock and pop in modern history.

Coldplay’s Parachutes album contains hits such as Shiver, Yellow, and Trouble. Sparks may not be one of the biggest selling tracks on the album, but it has received acclaim for its appearance in the popular movie Wedding Crashers.

Such Great Heights actually ranks as high as 27 on Rolling Stone’s 100 Best Songs of the Decade (the 2000s) list. Released as the lead single for The Postal Service’s Give Up album, it reached number 21 in the US Billboard charts.

Come Away With Me

Come Away With Me was the lead single and title of Norah Jones’ debut album back in 2002. The album hit number one in the US Billboard charts and received a Grammy for Album of the Year. The song features in many films, notably Maid in Manhattan in 2002.

OneRepublic are perhaps best known for their 2006 hit Apologize, but saw Counting Stars released on their third studio album. As of February 2021, the song has received over 3.2 billion hits on YouTube. They’ll be counting more than stars!

Two short words, and you’ve got yourself a hit. Released in 2012, The Lumineers were only beaten to top spot in the Billboard charts by Bruno Mars and Locked Out of Heaven. It has been used in The Vampire Diaries, The X-Files and is a playable track on the video game Guitar Hero.

Vance Joy’s Riptide was one of the catchiest songs of 2013 and has the record to prove it. In May 2015, Riptide beat Lady Gaga’s Poker Face in becoming the longest-charting song in the Australian top 100.

Your Body Is A Wonderland

John Mayer is a popular acoustic singer-songwriter and Your Body Is a Wonderland is one of his best-known songs. It was written about his girlfriend at the age of 14 and was originally titled Strawberry Wonderland. It features in the US version of The Office, as well as in Family Guy and Dancing With the Stars.

Released as the second single on Regina Spektor’s What We Saw From the Cheap Seats album, and its lyrics are meant to represent a walk through New York City. It has received over 6 million views on YouTube.