The 6 Most Popular Ukulele Wood Types and the Main Differences 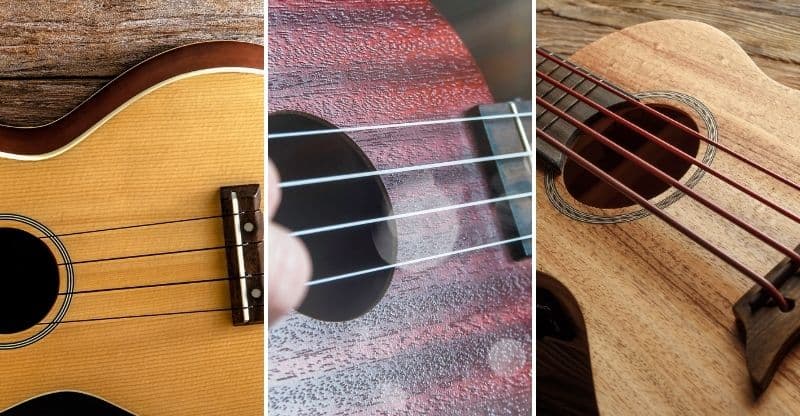 What is the biggest factor when it comes to the tone of your uke? It is size, shape, scale length?

While all those things are important, it’s actually the type of wood used to build the uke that matters the most. This holds true regardless of the type of uke you’re playing, whether that’s a soprano, concert, tenor, or baritone ukulele.

In particular, the tonewood used for the soundboard (or the ‘top’) makes a vast difference to the overall sound, as it’s this part of the uke where vibrations are turned into sound.

There are lots of ukulele wood types out there, and half the challenge is knowing which is the right one for you. It’s worth remembering, there is no ‘right and wrong’ and what sounds good to my ear might not to yours. It’s about personal preference.

But there’s no argument that a solid mahogany uke will sound vastly different to a concert ukulele made from laminate wood.

In this article, we’re going to walk you through the different wood types and the tones they give you (also called ‘tonewoods’).

Each tonewood has its own special properties, as we’ll now find out.

In terms of sound, it has a warm and woody sound. It focuses on the mid frequencies (with higher mid-range tones than rosewood) and has a sweet sound that perfectly complements the uke, hence why it’s always been a mainstay of the ukulele.

When used for the top, it is considerably darker than softwoods such as spruce (which are very bright) but has more ‘punch’ in the mids than softwoods.

So in a sense, Mahogany gives you the best of both worlds: a fair amount of treble with a beefed-up mid-range. It’s known for projecting really well too.

It’s also relatively cheap too, hence why you find is used on a lot of beginner ukuleles, especially in the neck.

The light blonde colored spruce is a popular softwood top choice for budget ukuleles and is often paired with hardwood (rosewood, mahogany, or maple) backs and sides. It’s an extremely stiff, tough wood, and projects really well so it’s great for bashing out those fun ukulele songs.

As for tone, a spruce top is really bright and gives excellent note articulation, hence why it is used widely in the manufacturing of acoustic guitars.

There are a few varieties of spruce, such as Sitka spruce (known for being particularly bright) and Engelmann spruce (slightly mellower, so often found in classical instruments)

Like cedar (see below), ukuleles made with a spruce top are also considered superb for fingerpicking.

The softwood cedar is sometimes found used on the top as an alternative to spruce, as its mids are warmer.

It’s reddish in color, but there are no striking grains with cedar, with its plain finish. As for tone, it’s soft with more bass than spruce, and less brightness (you could even say muddy or dark).

Another hardwood that often looks even lighter than spruce, but in fact is a much heavier wood (maple is a hardwood).

Maple is considered particularly adept at reducing feedback and undesirable overtones, so it’s often used for the back and sides (and often paired with a spruce top).

As for tone, maple has a very neutral tone and doesn’t color the tone much at all.

As for aesthetics, maple can look awesome, especially flamed or spalted maples, which look very cool.

Rosewood is one of the most popular choices for the back and sides (popular with acoustics guitars too), and you can even find all-mahogany ukuleles as you see in the pic above.

As a hardwood, its tone is warm and resonant, with a particularly bright, rounded sound. Looks-wise, it’s a beautiful, dark, rich-looking wood.

There are two types of rosewood (Brazillian rosewood and Indian rosewood). Due to over-forestation, the procuring of the Brazilian variety was banned (it became CITES-protected) which was later lifted in 2019.

Finally, we have the exotic wood ‘koa’, also known as ‘acacia koa’.

Koa wood is indigenous to Hawaii and has almost become synonymous with the history of the Uke, as it was used in the early days of ukulele building. To this day it’s widely considered the ‘gold standard’ by ukulele players – if there was one song you want to play Israel Kamakawiwo’ole Somewhere over the Rainbow on, it’s a uke made from koa!

As for sound, it has superbly pronounced mids and particularly good for high-end articulation, while being sweet, mellow, and warm (suiting the ukulele down to a T!).

It looks gorgeous looking too, like the islands it originates from, with beautiful wood grain patterns.

The downside is… it’s expensive.

The most important elements we must take into account when choosing solid or laminated wood are:

The woods we discuss in this article are all solid woods. Solid wood instruments are generally considered superior as they have a richer and more resonant tone. The downside is getting your hands on a solid wood uke will cost considerably more.

On the other hand, entry-level ukuleles are usually made from laminate woods. Laminate wood is constructed of several thin layers of wood stuck together, and a lot lighter in weight. Sound-wise, laminate ukuleles sound a lot ‘thinner’ and lack the characterful overtones you get from solid wood like Koa.

So what wood is best for a ukulele? Well, that all depends on your price range. If you can afford a solid koa ukulele, that’s a good choice (lucky you!).

However, if you’re just starting out, there are plenty of laminate ukuleles out there that offer exceptional value.