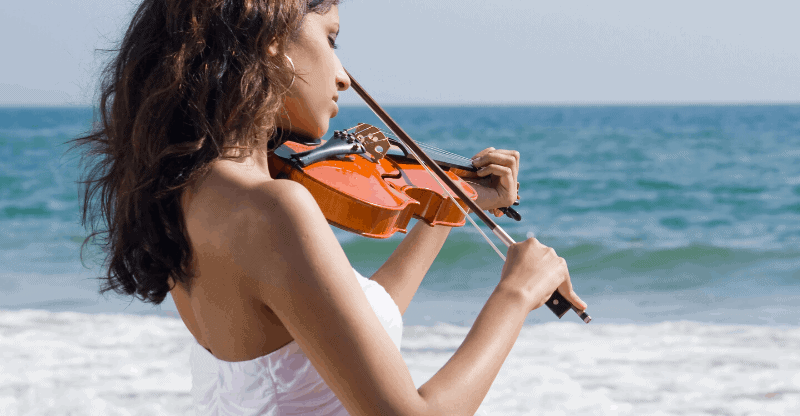 In this article, we introduce you to 24 violin bowing techniques used while playing the violin, grouped into four main categories (Martelé, Spiccato, Detaché and several more we grouped under ‘Other’).

Some won’t take you long to master, others are will take a lot longer to learn.

So, without further ado, let’s get stuck in. 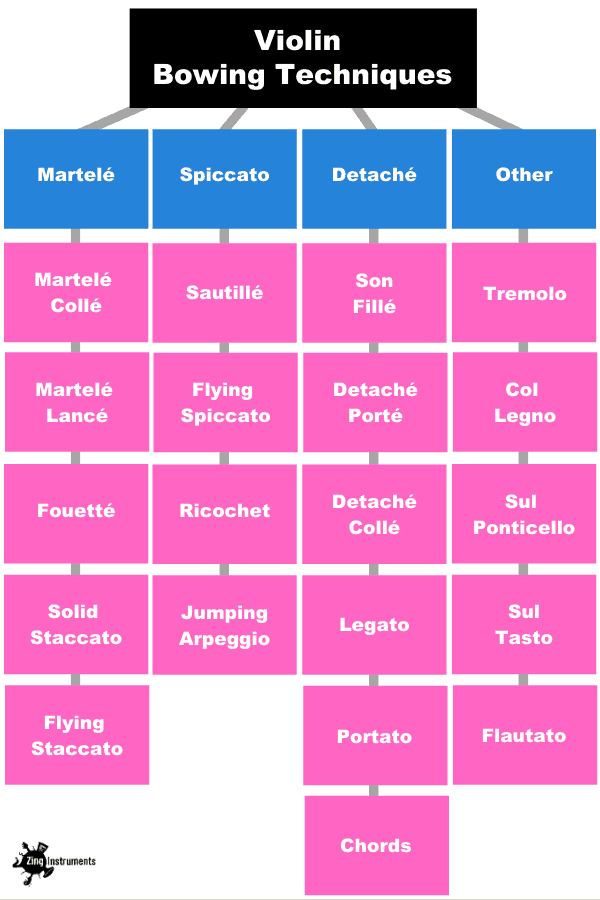 The term Martelé means “hammered” in French, and basically means the section needs to be played aggressively.

A Martelé is sometimes marked in music with a line or an accent over the note, and this technique requires separate bows for each note played, gently alternating between down bows and up bows while you play.

Collé is a French word which means “glued” or “stuck” and is a stroke that starts with putting pressure on the bow that’s resting on the string. The pressure should be just enough to create an easily audible scratch sound.

Collé is an extremely articulate stroke that is often done at the frog or very low in the bow. While the technique is difficult, it can give you a tremendous amount of carrying power, which is why it is one of those techniques that never gets old.

This is the ultimate exercise for gaining excellent bow control and is crucial to learn before moving up to more advanced techniques.

Practicing Collé regularly will help with cleaning up your normal bowing by not making you depend on your upper arm and shoulder for pushing or pulling the bow.

Staccato is an Italian word for “Detached.” In modern notation, it denotes a note of a short duration that’s separated from the following note with a pause. The staccato technique can be further divided into – firm and brilliant.

The pressure that’s used with a solid staccato technique induces trembling in the entire arm and fingers. This effect is then imparted on the bow as well.

It is important to note that the Staccato is played with not just the wrist, but the entire arm.

Flying staccato is used only in up-bow and requires tremendous finger flexibility. Similar to a Spiccato (see below), the bow is controlled by the left hand, and is thrown onto the string from above. It is performed off the string, as in, the bow is dropped on the string at the starting of an up bow.

With the flying staccato, the natural spring of the bow is allowed to carry on for the entire duration of the run along with tremulant impulses generated by the upper arm. You can use varied firmness, arm speeds, and bow tensions while playing the flying staccato.

The Fouetté technique can be considered as the middle ground between the Detaché with accents and the Spiccato on the string. In ballet, it is the quick, pivot move that’s carried out while standing on one leg and using the other to whip around the body.

Keeping that in mind, a fouetté can be described as an accented Detaché. 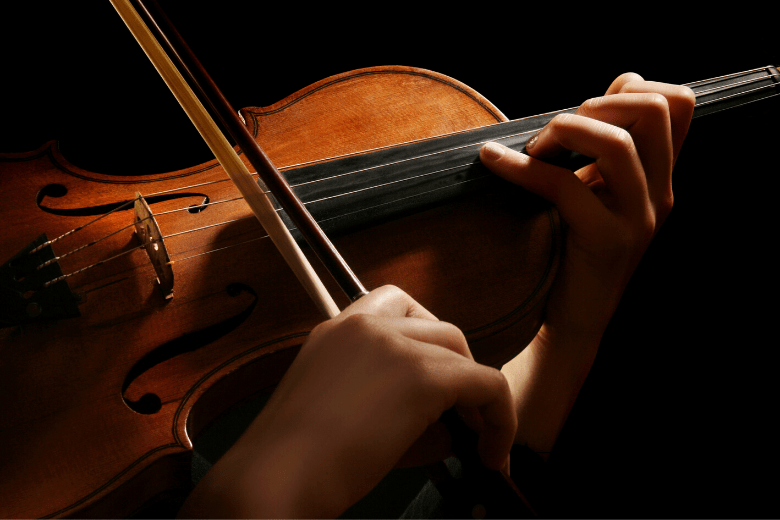 The spiccato stroke has many variations, from the harder sound, which comes with a more vertical movement to the softer, brushed strokes, which generate the opposite effect.

The bow placement has a major impact on the speed of the spiccato, with the effect depending on the tempo. The result of the spiccato can vary by simply altering the tilt and the placement of the bow while playing.

The flying spiccato is an up-bow stroke that is slightly slurred and separate. It is produced off the string an in a single direction and never down bow.

While playing a flying spiccato, there is an almost vertical jump as you play multiple spiccato notes on a single bow stroke, in the same spot of the bow. Spiccato should be played under a defined speed limit, after which it turns into a Sautillé.

To play a slightly up-tempo tune, you go with a Sautillé, which is played higher on the bow as compared to a Spiccato. While playing the Sautillé, the natural bounce of your bow and your handwork together, which results in the bow bouncing more naturally and doing all the work when it comes to producing sound.

To practice a Sautillé, use your right thumb, middle and index fingers to start a wrist tremolo in the upper half. Then, move the bow toward the middle and start the Sautillé stroke while maintaining complete bow grip.

Ricochet is a bow stroke that occurs when the bow is thrown onto the string in a controlled manner, and, as a result, bounces off. The ricochet is a bowing technique that is used when playing fast notes that are played down bow and staccato.

This violin bowing technique can be achieved by playing multiple Sautillé notes on a single bow stroke by first initiating the jump and letting the bow bounce.

This is a difficult across-the-strings bouncing movement you will need for pieces such as the Mendelssohn concerto.

For a jumping or ‘springing’ arpeggio, you start on the G string a little above middle up bow, then play G again in the down bow. You end by rotating the whole arm over to the E string, hit E, then turn the bow around on E, which results in the production of the sounds of two Gs and two Es.

To get the bow to bounce, hold it as far back as possible, and drive the bow from above the middle in an up-bow. Then, turn the bow around, dropping your wrist violently, while also cradling the bow to get that jumping effect.

If you get at least four bounces while doing this technique, you’re doing it right.

When it comes to playing the violin, the Legato technique and some Staccato techniques represent the two extremes of violin playing.

While the former offers a more fluid sound, the latter is all about separating each sound while playing briskly.

But what if you’re looking for something in between these two extremes? This is where the Detaché technique comes in.

The Detaché technique incorporates broad, but separate strokes of the bow. In other words, the notes are not slurred while playing.

This allows users to achieve a median balance between the briskness of the Staccato technique and the smooth fluidity of the Legato technique.

While playing the Detaché technique, a violinist focuses on the starting of each bow stroke by using higher bow speed changes.

Son Filé means “Spun Sound” and is a term that is used to describe a sustained note that’s played with the whole bow.

For those of you who are new to the art of playing the violin, the Son Filé is used to describe the infamous one-minute bow that’s played by the violin maestros, and its importance was even written about by Mozart’s father, Leopold.

The good news is that you can do it too. Son Filé makes a great bowing warm up exercise that’s used by beginners and experienced violinists.

While practicing the Son Filé, it is important to think of your playing technique as the gentle waves that are flowing in and out of the seashore. This is key to developing an even sound quality while playing.

When playing the Son Filé technique, you should try to divide the bow into four individual sections and then listen to each of the sounds they produce individually. To make their practice effective, try using a slow scale of D major. A great example of the Son Filé is Mozart’s 5th Concerto.

In Latin, “Legato” means “tied together.” The Legato technique allows you to play multiple notes with a single bow stroke. In sheet music, this is denoted by a slur or curved line above the notes that are included in a single bow.

With this technique, each note is played individually for the maximum duration by blending seamlessly into the next note. The key to Legato bowing is to not create any distinction between multiple notes, even while changing notes.

The Legado technique allows you to use the same bow direction for as many notes as possible without any intervening silence. While Legado does not have to be played in a single bow direction, it should have a similar sound effect.

Portato is a bowing technique that is quite similar to that of Legato, as in, you play multiple notes with a single bow stroke. The only difference is that there is a slight pause between the notes without accents, which is much like pausing a video.

The technique allows you to achieve a pulsation effect while playing instated of separating each of the notes. The Portato technique applies to repeated notes or those notes with identical values such as scales.

A chord is when you’re playing two or more notes together. This means crossing strings, double-stops, and using two or more strings, such as a G and a B chord. You can also use three-note and four-note chords while playing the violin.

The key to playing chords on the violin is to divide the bow properly, which doesn’t necessarily mean playing with even parts of the top and bottom bow. 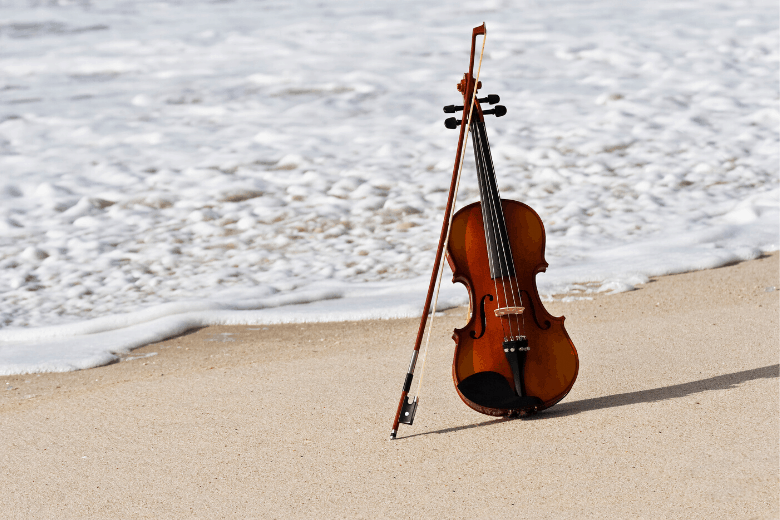 There are also a few other violin techniques that you should get familiar with that will get you better control over the bow and more command over the notes.

The following are just some of the other bowing techniques that you can practice while learning the violin.

A tremolo is indicated by three lines through the stick of a note. This indicates that the note needs to be played eight times faster. When playing a Tremolo, being relaxed and using fewer muscles can result in a faster tremolo.

This technique will also keep your arm from paining. With this technique, the high elbow is replaced with smaller muscles that prove to be far more efficient for achieving the perfect tremolo.

Col Legno basically means “wood.” While other notes are played with the bow string coming in contact with the strings of the violin, the clear pitch element is determined by the distance of the bow from the bridge at the point of contact.

Normally, while playing the violin, the bow comes into contact with the strings somewhere between the bridge and the start of the fingerboard. While playing Sul Punticello, you’ll be striking the strings over the bridge.

The ideal results are achieved by not adding too much pressure over the strings, while still playing fast enough so that the strings do not vibrate as much, which gets you that spooky, metallic sound.

Sul Tasto means “on the touch” and is the exact opposite of Sul Punticello. Here, you play over the fingerboard. This also decreases the partials, producing a muffled, hollow sound that sounds more like a clarinet.

The word Flautando means “flute-like.” The Flautando technique produces an airy, flute-like sound by moving the bow lightly over the string, close to the fingerboard.

The Flautando is used to produce the effects of a flute when there’s no flute around. The technique is played higher on the violin’s fingerboard and requires a lot of the bow to produce the desired sound, or else, you are not going to get that airy sound.

These were just some of the sounds that you can produce by using various violin bowing techniques.

Learning these violin bowing techniques is not going to be easy, but with the right amount of effort and practice, you will make leaps and bounds with your violin playing.