10 Whammy Bar Techniques to Use In Your Next Solo 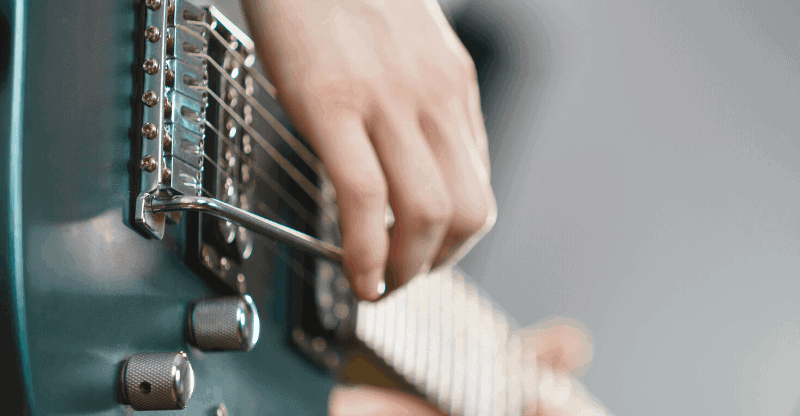 Since the ’50s, whammy bars have been used in everything from surf music to thrash metal.

The funny thing is, a lot of guitarists don’t know how to use them properly or find them a little intimidating.

Its time to change all that.

The truth is these twangy bars can add some amazing diversity to your sound when you know what you’re doing. The best part is that most are relatively easy.

So let’s get learning some.

This the most well-known whammy bar technique and a popular option for first-timers, since it’s easy to perform.

In particular, ‘80s glam metal and more recent heavy metal genres use a lot of dive bombs in their music as it’s a cool way to end a song or solo.

Check out Halen’s ‘Eruption’ (below) for a really good example.

The Reverse Dive Bomb (aka the Pig Squeal)

You’ve probably guessed, this is the same as the dive bomb, but using an opposite pitch bend.

To do this, simply pull the whammy bar up instead of down after picking a note.

The result is a sound similar to a motorbike driving off into the distance if you’re playing with distortion on. You can replicate the sound of gear changes by slightly adjusting the pitch up and down with the whammy too.

Note: If you’ve got a Stratocaster fitted with a tremolo arm, remember you’ll need to play the note with the whammy pressed down before letting it gradually rise up to normal level. With a Floyd Rose you have the option of lifting the whammy bar up from its resting position. This gives out a different sort of dive bomb tone, but be careful not to bend the strings up too far to reduce the risk of damaging or breaking them.

Check out this vid, to see how it’s done:

The Scoop and Doop

This sounds a bit whacky, but we promise it sounds cool once you get it right.

Once you get it right however, the scoop and doop method is great for adding some slurring to your trills or bendy accents to single notes.

In particular, Alan Holdsworth often uses this method in his solos and licks.

Check out this vid at about 4 minutes in, to see how it works:

This is a little more advanced simply because it requires some multi-tasking (guys, look away now!).

The overall effect is a distorted harmonic note, that gradually increases the pitch, sounding a bit like an elephant blowing its trunk.

This can be difficult seeing as you may have to use your fretting hand to control both the volume dial and the whammy simultaneously.

The technique can sound cool amidst a solo and can make for an impactful ending of a song.

Check out the song ‘Spontaneous’ by the band Toxik, right at the start you hear this effect in its full glory.

Take a look at this vid to see how it’s done:

This is probably my favorite of all the whammy bar effects out there seeing as it was invented by the man himself, Dimebag Darrel of Pantera!

Be careful on this last step, as overpulling the strings can lead to breakages and you don’t want to be re-stringing a Floyd Rose mid-set!

Most guitarists find picking the string with their fretting hand and getting the harmonics to ring out the hardest part. Then there’s always the possibility of missing the harmonic and the whole thing sounding lack-luster too.

Check out this vid to see Dimebag explain the squeal himself:

Lizard Down the Throat (aka Purring Technique)

You’ll be relieved to hear this one’s easier than the Dimebag Squeal.

Some folks also refer to it as the ‘purring’ technique seeing as when you slide up the frets, the motion produces a sort of purr or growling sound. This effect actually comes from the metal frets as you slide up the fingerboard.

The hardest bit is retaining the original pitch, which is down to your timing and tremolo control.

Artists such as Steve Vai and Joe Satriani rock this technique, check out this video to see how it’s done:

This one is fairly difficult to get right but sounds cool once you do. The aim of this trick is to create different melodies on fewer frets, using the whammy bar to raise or lower the pitch instead of moving your fretting hand.

To make this easier try picking a target note, then play the same note whilst pressing the bar down.

If you now release it, the pitch will raise and return to the original note. Once you get this technique, you could even try using it to add some melodic sections that replicate vocals.

In particular, Jimi Hendrix and Steve Vai have been known to use this technique.

Ever wanted to create those wavy Hawaiian chords that make you feel like you’re at the beach?

Of course you have, you’re only human.

The overall effect is as though you’re sliding the chord up the fretboard, but without the hassle of having to use a slide.

This is advantageous as using a slide limits the sort of chords you can play as it only lies in a line across the neck.

Plus, you won’t need to raise your action as you do if you’re using a slide.

Take a look at this video to see how you can use the tremolo arm to create some tranquil, clean chords:

In music theory, grace notes are a fast, additional musical ornament, played quickly before or after the main note or chord in a riff.

Guitarists usually add them in as hammer-ons or slides. This final technique incorporates grace notes to produce a sort of eastern vibe.

This technique can be hard to perform without a guitar that sustains well, as hammer-ons don’t always produce much sound without another fret being picked first.

Check out this vid to see how to play Indian grace notes:

Final Thoughts on How To Use a Tremolo Bar

So, as you can see whammy bars produce a truly diverse array of interesting effects, most of which vary in difficulty.

If you’re a beginner, we’d advise you to start off by trying out some simple techniques such as the reverse or standard dive-bomb or Hawaiian sounding chords.

If you’re looking to expand your understanding further, then try out scoops and doops, slides or Indian grace notes. These three should seem fairly straightforward if you’re used to using divebombs, slides and hammer-ons already.

If you’re well accustomed to using a whammy bar and really want to show off, try out the Dimebag Squeal, the elephant noise effect, or the lizard down the throat technique.

All of these methods require some degree of multi-tasking, as well as good control over the bar and fretting hand.