What is a Piano Soundboard Made of? 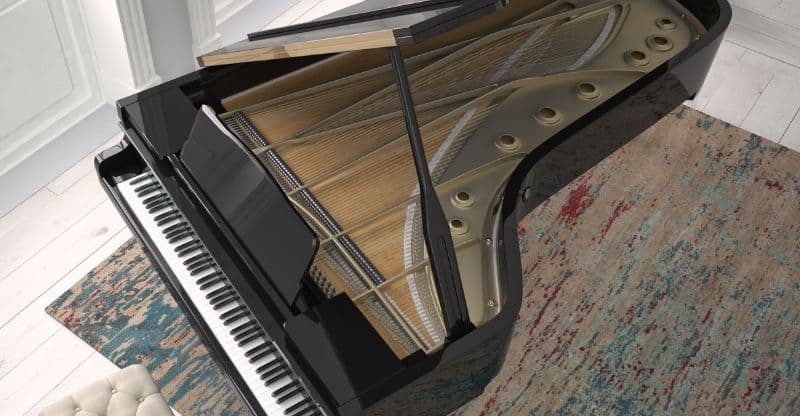 The soundboard is one of the least understood parts of the modern piano, but in fact, has a lot to do with the instrument’s full and rich sound.

In this article, we’re going to explore the piano soundboard and understand what is, what it does, and why the piano wouldn’t be the same without it!

What is a piano soundboard made of?
Wood, usually Sitka spruce because of its flexibility and strength.

What is a Soundboard?

Where the piano differs from other instruments with soundboards, is that they have a soundboard built directly into their body. The piano has a slightly different setup.

Think of a stringed instrument such as the guitar or violin. When you pluck or bow a string, the soundboard amplifies the sound. Its purpose is to project a large volume of sound over a wide frequency.

The soundboard is basically a large wooden resonator that transforms the vibrations of the strings into audible waves of sound.

Without the soundboard, the sound from the string alone would be barely audible (a mere whisper) and have high – and not particularly nice on the ear – overtones.

With the piano, the soundboard is a large, thin wooden plate usually made of Sitka spruce, as this wood is better at absorbing the higher overtones (basically, stopping higher harmonic components from sounding).

How Does it Amplify Sound? 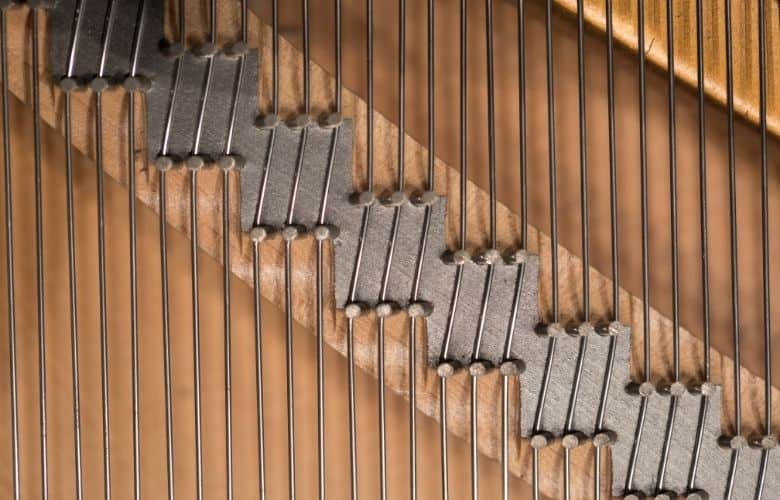 So it amplifies the sound, you get that. But how, exactly does it work with the piano?

Ok, when you hit a key, a hammer made of wood and felt strikes a group of three strings (in the modern piano, at least) to sound a note. The strings vibrate, as you’d expect, at a frequency according to their length, mass, and tension.

This vibrating back and forth of the strings displaces the air, thus creating sound waves.

A string, or even three strings, has a tiny surface area. As a result, they can’t displace very much air at all, so you can barely hear anything (think of how an electric guitar sounds without it plugged in).

Spruce became the wood of choice for the construction of piano soundboards over 100 years ago and had been used for violins and harpsichords for centuries. Spruce is the perfect combination of flexibility and elasticity for vibration, and strength – it needs to be tough to resist the pressure of the piano’s string tension.

The issue is, over-forestation is diminishing the supply of Sitka spruce for soundboards. Laminate soundboards go some way to solve this, and they can be built up from shorter boards (on the interior) which puts less onus on sourcing high-quality spruce. 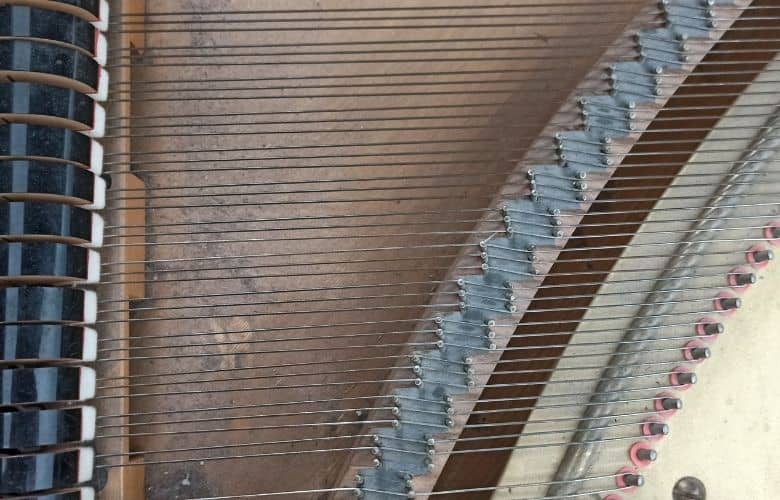 Most pianos these days have laminate soundboards (also known as a ‘surface tension soundboard’, ‘multi-ply soundboard’, or ‘meniscus soundboard’) that are comprised of layers of wood.

The glued-together planks are then cut and planed down into shape, to match the shape of the rim. The top of the board has a slight dome that curves towards the strings ever so slightly, which allows the strings (which are pulled over the bridge at very high tension) to set nice and firmly on the bridge.

Incidentally, many other parts of the piano are glued together in layers like this, such as the key bed and support beams.

The company Wurlitzer was the first to introduce the first mass-produced piano with a laminated soundboard in the 1970s, which saw many others follow suit.

Laminated soundboard panels have various advantages, and are nearly immune to variations in humidity (something solid soundboards suffered hopelessly from). Other benefits such as improved tuning stability, more structural strength (resistance to compression ridges and cracking), and better tonal performance.

Why is the Soundboard Made from Wood?

If the sole purpose of the soundboard was to simply project sound, wouldn’t one made of metal be a better choice?

Well, interestingly wood is used not only to project sound but also to stop certain sounds (in other words, high overtones) from being projected. In other words, it acts as a sort of filter too.

Like we’ve said, the choice of wood is crucial here too, as Sitka spruce is particularly adept at cutting off high overtones.

Here’s a good video about how the Steinway soundboard is made: