What Type of Instrument is a Piano? Stringed, Percussion, or Both 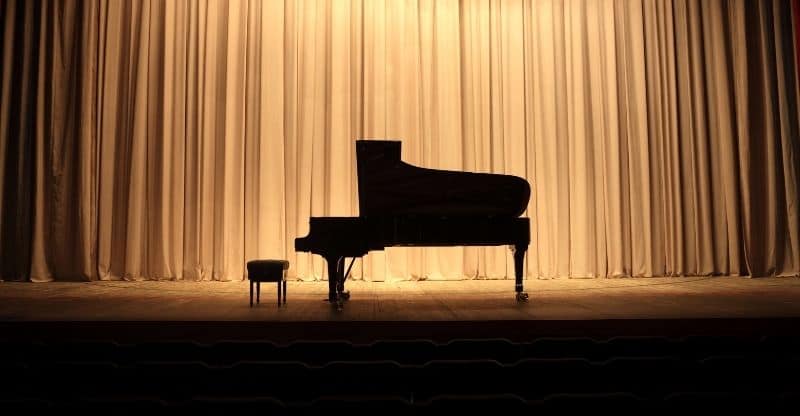 We all know the piano, easily one of the most popular instruments of modern times.

It’s played in almost every genre imaginable, from avant garde to classical. It’s even got a whole range of health benefits.

But have you ever wondered what kind of instrument it is? Do you know which family of musical instruments the piano belongs to?

If you’re here for the quick answer, here you go:

What type of instrument is a piano? These days it’s generally accepted that the piano is both a stringed instrument and a percussion instrument.

But how can it be both? Read on my friend, read on.

The Case for the Piano as a Stringed Instrument

In 1914 two European musicologists by the names of Erich Moritz von Hornbostel and Curt Sachs set about classifying all the world’s acoustic instruments. No small undertaking.

The result became the Hornbostel-Sachs classification system or the ‘H-S System’ for short. It’s the most widely used system for classifying musical instruments used by ethnomusicologists.

The system has five categories:

Chordophones are instruments that produce sound by means of strings stretched between two points, which are then either plucked, bowed, struck, strummed,  vibrating of these strings.

Think of instruments like the guitar or banjo that are plucked, or a violin or viola that is bowed.

So chordophones are basically what we consider stringed instruments

In this system, the piano also falls into the instrument family of chordophones, as it has strings stretched between two points that are struck.

The Case for the Piano as a Percussion Instrument

But can the piano also be considered a percussive instrument (or in H-S system terminology, an ‘Idiophone’)?

The definition from Webster’s dictionary defines a percussion instrument as ‘a musical instrument sounded by striking, shaking, or scraping’.

So can that be applied to the piano?

Each of the piano’s 88 keys is attached to a felt-covered hammer that strikes a string of varying length and thickness – much like you’d hit a kick drum pedal with your foot.

So you see why many people make the case that the piano is a percussion instrument.

As you see below, the hammers hit the strings.

So, Is the Piano a String or Percussion Instrument?

If you go by the Hornbostel-Sachs classification system, the piano is a stringed instrument. But we have to accept that the piano falls into the realm of percussion instruments as it uses hammers for striking.

For sake of argument, I think it’s safe to say it falls into both categories.

Or neither. Just say ‘a piano is a piano’ and lives in a category of its own.

It’s certainly earned the right to!