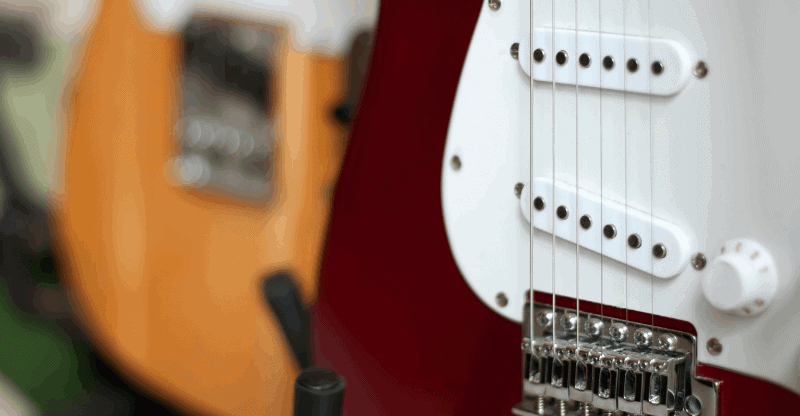 Have you ever noticed that some pickups are slanted? No, you don’t need your eyes testing, some guitar pickup are indeed angled. 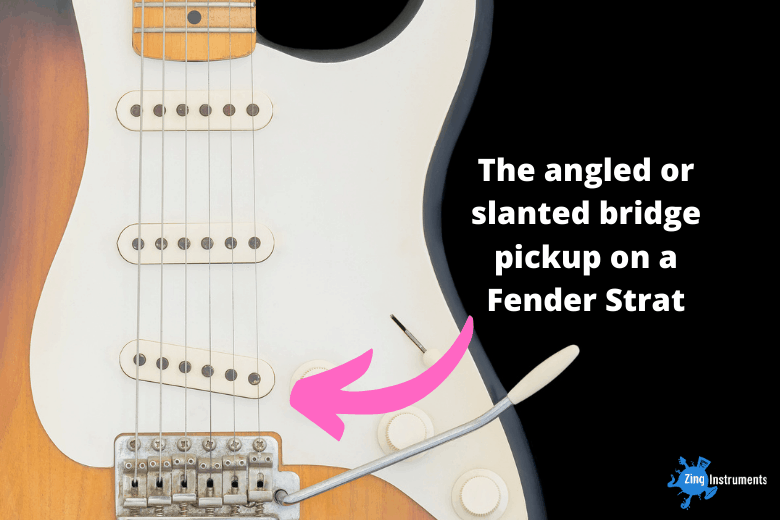 You mainly find its single-coil pickups that are slanted this way (but, as we’ll see, not always). But why are they angled? What possible reason could there be for putting it on an angle like that?

That, my friend, is what you’re about to find out.

Why are Some Guitar Pickups Angled and Others Not?

But why? Well, it’s all about physics.

Firstly, when the pickups are angled this way, the bass frequencies of the lower strings (low E and A strings) get emphasized because they’re a fraction nearer the neck.

As we explained in our article about neck vs bridge pickups, the neck position is naturally more bassy while the bridge has more treble response.

By positioning the ’bass end’ of the pickup nearer the neck, it improves the bass (where the poles are picking up the signal from the bass strings).

Single coil pickups, especially those made by Fender back in the say, were naturally quite bright so this angling helped to beef up the bass response.

Secondly, the other end of the pickup is pointed nearer the bridge, so this emphasizes the frequencies of the treble strings (especially B and high E strings) and makes them more pronounced and brighter.

To recap, an angled pickup boosts low bass frequencies and enhances treble response. It’s supposed to improve tone and note articulation and give you more balance between low and high end in your tone. 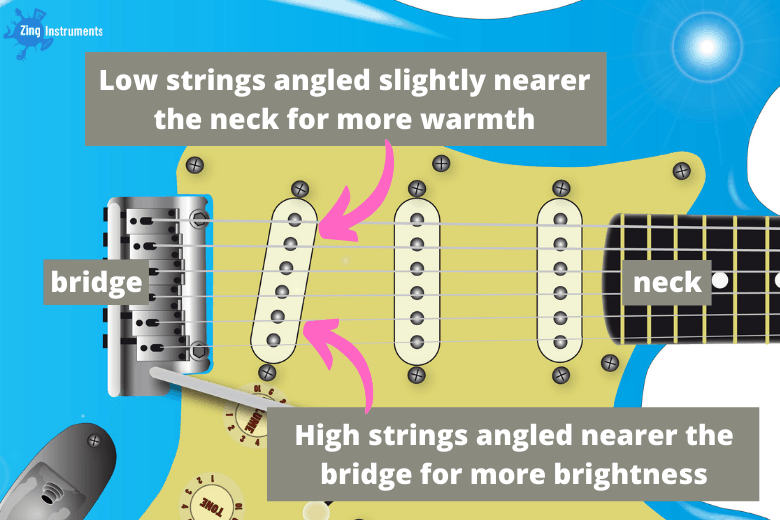 Short History of the Angled Pickup

It was Leo Fender who first introduced the slanted pickup.

Back in the 1940s and ‘50s the tones of the lap and pedal steel guitars were hugely popular.

Before the Fender Stratocaster became a household name in the ‘60s, western swing music was all the rage, especially in California where Fender were based.

Swing featured a lot of lap and pedal steel guitar with its characteristic ‘twangy’ sound. The slanted single-coil was an attempt by Fender to add a brightness to the treble strings for a similar twang.

The tremolo bar (or the whammy bar as it’s lovingly known) was another example of how Leo Fender wanted to introduce the note-bending capabilities of a steel-string guitar sound in a conventional electric guitar.

One final word about amplification. Another reason why slanted pickups were introduced back then was because of the types of amplifiers used in those days.

Despite some brilliant tube amplifiers in circulation, they lacked articulation in the high end. The angled pickup helps to brighten things up.

Is it Only the Bridge Pickup that is Angled?

Fender’s flagship guitars the Stratocaster and Telecaster have one slanted bridge pickup, which, as we’ve already discussed, helps to strengthen the weak bass frequencies you get with single coils and softens up the harsh frequencies in the bridge position.

For guitars like Stratocasters and Telecasters, there’s not much point in angling the neck pickup as it’s already warm and mellow in the position and the balance between the straight neck pickup and slanted bridge pickup position works brilliantly.

But do you have to stop at one angled pickup in the bridge position? Not at all.

Some of the ‘offset’ guitars like the short scaled Fender Mustang or the Fender Jag-Stang (an electric guitar designed by Kurt Cobain as a hybrid of the Jaguar and the Mustang) have two slanted pickups – one in the neck position as well as bridge position that are placed perpendicularly to the strings.

This adds a lot more top end to the tone, giving the guitar an even brighter tone that’s become the signature sound of some grunge and shoegazer alt-rock like Sonic Youth.

As we’ve discussed, it’s usually single-coil bridge pickups that are slanted, and it’s rare to find slanted humbuckers or P90s.

The reason is that humbuckers are already warm and mellow from when they’re straight. There’s no need to angle a humbucker to increase bass response because there’s plenty of bass there already!

The other reason is one of logistics. Single coils pickups have a thin profile and don’t look out of place slanted (far from it, it’s what you expect to see on a classic Tele or Strat).

But try putting a humbucker on an angle and sometimes the pole pieces won’t even align with the strings (though the advent of humbuckers with different pole spacing has addressed this).

As with everything related to the guitar, there are exceptions to the rule. One of the biggest guitars of his day, Eddie Van Halen, used a slanted bridge humbucker to great effect on this

The same slanted positioning can sometimes be seen with humbuckers. Arguably one of the biggest innovators in the world of guitars, the late, great Eddie Van Halen slanted the bridge humbucker on his Frankenstrat guitar (though it has to be said, it’s only angled slightly).

What Happens if you Reverse the Angle?

Jimi Hendrix famously played an upside-down Stratocaster. He was left-handed, but still used a right-handed guitar but switched the swings around to the lower bass strings (E and A) were picked up by the poles nearer the bridge, whereas the higher strings (E and B) sounded more mellow, as they passed over the poles that were nearer the neck.

It’s basically the opposite effect to what the angle of the pickup was designed for, but nobody’s complaining. Hendrix did alright!

I hope you’ve enjoyed this brief foray into the world of slanted pickups.

It’s yet another example of why the history of the guitar is so fascinating, and how the smallest of tweaks can make such a difference.