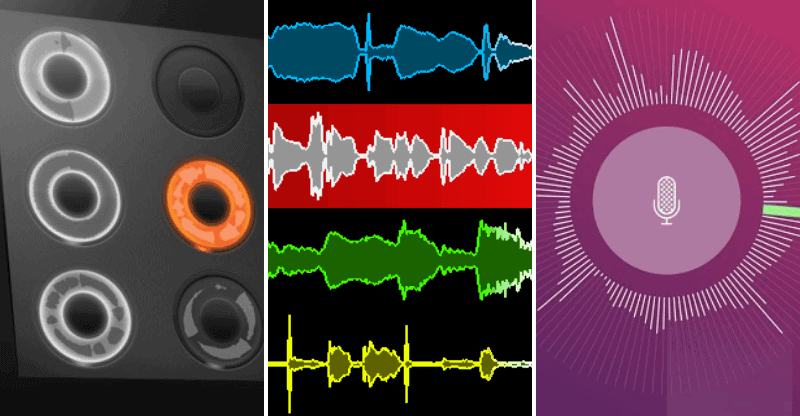 Musicians listen up! That thing you carry around – you know, your phone – can, with a couple of clicks, be transformed into a really good looping machine.

Forget about recording audio notes on your phone, that’s for chumps.

The way to do it is via one of these apps, and in this article, we reveal the best loop pedal apps for Android and iOS devices (iPhone, iPad).

One thing to note is that for all the following apps, using headphones is essential. If the sound from the loop comes out of your smartphone’s speaker, it will be recorded by the next loop and will create an echoey mess! When you wear headphones, the loop that’s played back to you isn’t audible to the microphones and it prevents the app from re-recording itself.

Got it? Let’s continue…

Loopy HD is the swiss army knife of app-based loopers, it pretty much does everything. It’s found fame recently when it appeared on The Tonight Show Starring Jimmy Fallon when he demoed it with Billy Joel.

The overdub feature lets you construct complex soundscapes from many layers, and you can merge tracks by dragging one onto another.

To keep your hands free you can count-in, count-out, auto-fade, and record chain.

It comes with an audio and visual metronome, in any time signature and the fully trainable MIDI control and MIDI clock send/receive make working with a DAW (e.g. Ableton) a breeze.

Integrated audio copy and paste, plus audiobus support. When you import or paste a loop it’s automatically scaled to fit the beat.

Everyday Looper from the comically named Mancing Dolecules allows you to record four musical phrases on the iPhone app (six phrases on the iPad version) which you can mix and merge on the fly to free up space.

It can also be used with two-handed instruments too, thanks to the auto start/stop recording function (quantized recording).

It’s a gesture-based buttonless interface, so it’s all about tapping or swiping the waveforms to play, pause, stop or record, as well as change volume or erase.

The auto-normalization function on each track is neat too, which gives you the maximum non-clipped volume just with a swipe.

While it’s not the richest in terms of features, LoopStack is one of the easiest virtual loop station apps to get your head around.

Like the others, it allows you to record and merge tracks on the fly. You can adjust volume, apply a reverb effect per track, and export the audio for you use in your DAW of choice.

Features include four independent recordable tracks which you can combine via drag and drop to save space. The automatic latency calibration helps to keep things sounding tight, and the built-in metronome is decent. The maximum loop time is only 32 seconds though, so not great if you want to make lengthy loops.

There’s a free trial if you want to give it a whirl (with save, load, and export disabled, plus the loop will reset after 5 minutes) but it’s good enough for dipping a toe in the water.

If you like and want the full feature set, you have to upgrade to LoopStack Premium by buying a LoopStack Unlock Key which will remove the trial limitations.

Can’t handle a looper not being a foot pedal? Well, Beats and Loops is for you then. This clever app turns your phone into a guitar pedal that you can control with your foot as you play.

To use it, you simply place your phone on the floor with the screen facing up. To ‘press’ the pedal, you just lightly swing your foot a few inches above the top edge of the screen (you don’t actually foot-tap your phone!). You can start and stop songs, switch song parts, and record loops. All hands-free.

In drummer mode, a short swipe with the foot starts the song or triggers a fill. The drums are sampled using a vintage Ludwig kit and played back in uncompressed, multi-sampled 24bit quality.

Other features include a chromatic tuner, tempo adjustment, and the ability to edit kick drum patterns.

It obviously takes some getting used to, but the ability to control it with your foot, much as you would a normal looper pedal, is pretty neat.

There’s a freemium version of Loopstation that lets you have a go without paying.

Featurewise, it’s akin to the rest, with infinite overdubs, volume control per loop, merge track features, metronome, and the rest.

When you are done, you can make a single track of your loop by recording a session and then share the session via Facebook, WhatsApp, SoundCloud, Mail, etc.

So there you have it, all these apps turn your phone into a musical instrument and let you do what you would with a real physical looper, at a fraction of the cost.

Whether it’s beatboxing, singing, or making songs with real instruments, it’s a clever way to use your phone.

It beats checking your social media feed every 2 minutes, at any rate 🙂