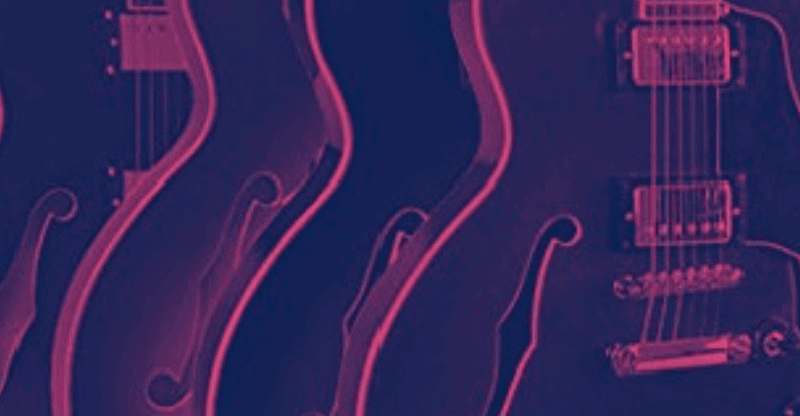 Finding a Firefly guitar is a bit like hunting the Yeti. There’s plenty of evidence they exist, but finding one is a different story. In this guide, we explain what all the fuss about – and if you’re lucky, you may just catch one.

Why? Because they offer amazing value for money.

Their three main models are:

They make them in small batches ( a few hundred at a time) that get snapped up super quick when they do appear for sale. There are people checking online every day with wallets out ready to buy.

So what makes them so great? And where should you be looking? In this article, we spill the beans. 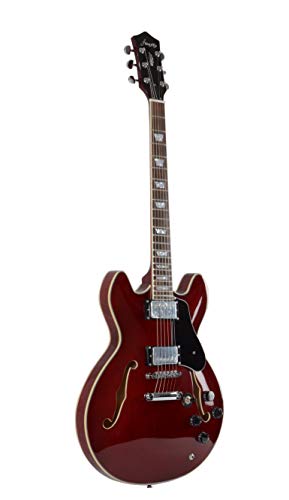 The FF338 is a semi-hollow guitar with solid wood running through the center. It is pretty much a carbon copy of the classic Gibson E335 and shares many of its hallmarks.

Firstly, it has the classic combo of maple neck/body and rosewood fingerboard. Then there’s the set-in neck, twin humbuckers, and those quintessential trapezoid inlays. The adjustable bridge and tailpiece are like the original, and the finish is great for the price.

The headstock has minimal tilt-back, so any accidental drops will be less likely to break the neck. There is significantly less tilt-back than a Gibson E335 which is at 17 degrees.

Of course, while this guitar is superb value, Firefly have had to compromise on a few things.

For example, some of the finer details are a little ugly. The frets are a bit gritty and could be smoother. The finish around the bindings is a bit rough and ready, and the machine heads are on the cheap side (and prone to slipping).

They have, however, included a bone nut that helps with tuning stability. It’s pretty amazing it has a bone nut instead of the usual plastic nut, as bone nuts are usually the preserve of higher-end guitars. Fender only recently introduced bone nuts to their premium line of guitars.

Another thing to remember is the humbuckers are slightly microphonic, so if you push them with a lot of gain they’ll squeal.

The FFTH model is a budget version of the Telecaster Thinline semi-acoustic guitar that was popular in the late 60s. Its semi-hollow body construction with those quirky ‘f’ holes delivers a more rounded warmth to the typical Tele twang.

Now let’s talk about hardware. It packs a pair of single-coil pickups (at neck and bridge positions). While they’re nowhere near as good as the Tim Shaw designed ones you find on a Fender-made Tele Thinline, they are satisfactory.

As for woods, it’s a mahogany body and a bolt-on, maple neck. Other features like the black pearl pickguard are pretty cool too.

There’s a decent range of colors too, from sunburst to pastel orange. 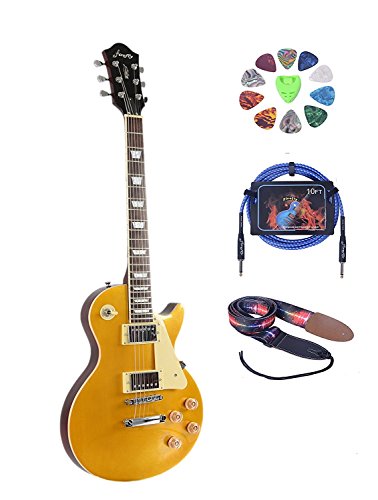 Now for their Les Paul clone, the FFLP.

As for tonewoods, it has a maple top veneer, rosewood fingerboard, and weighs in at around 8.5 lb.

Set neck and a nice cutaway for getting to those higher frets. Two volume and two tones controls as you’d expect, and a pair of the all-important humbuckers.

Often nuts from guitars made in China are badly cut, but not here. The bone nut is nicely done, as are the fret ends. The machine heads are cheap Grover copies that you may want to swap out for something better, but will more than suffice to get you started.

In summary, it’s a remarkably good Les Paul Copy for the money they’re asking, and better than other budget offerings from the likes of Oscar Schmidt. The issue is getting hold of one.

If you needed any more convincing, check out this video:

How Do I Get Hold of a Firefly Guitar?

When they come out you have be quick, they sell like hotcakes.

The best way to get a firefly guitar is through amazon.com. But you’ll have to have alerts set up, as they’re snapped up real quick.

There are other smaller retailers out there, but to be on the safe side I’d stick with Amazon.

As we’ve seen, firefly guitars are that golden combination of decent quality and affordability. Most everyone in the guitar community agrees they’re exceptional value for money.

You’ll find issues here and there, that’s to be expected. Stuff like tiny finish flaws on the body and bindings, or the machine heads slipping a bit as they’re on the cheap side. The pickups too may squeal a bit if you add too much gain. But even still, who cares..they’re so darn cheap!

For a fraction of the cost of an original, firefly are putting superb guitars (relatively speaking) into the hands of beginners at a steal of a price.

For the beginner on a budget, it’s hard to argue with the sheer value for money, regardless of how you feel about the rights and wrongs of cloning guitars.