The 4 Vocal Registers Explained (With Examples) 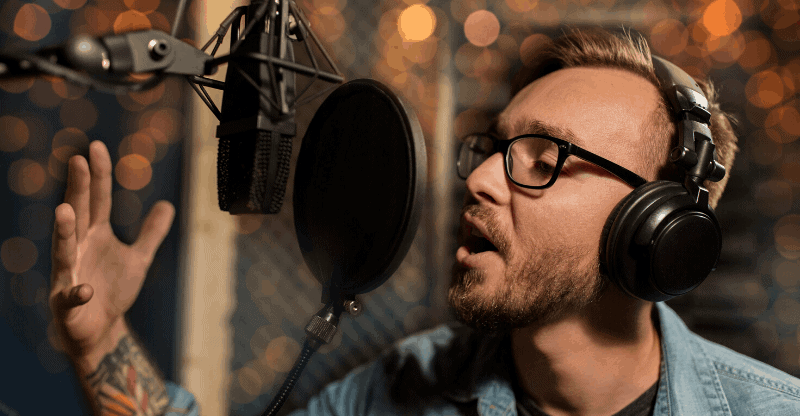 To people who aren’t from a musical background, singing may seem a relatively simple concept, but this couldn’t be further from the truth.

In reality, a trained singer will use their chest, vocal cords, and skull to determine the pitch and sound quality of a melody. Singers use four main registers to create vocal dynamics in a song.

In this article, we take a close look at these singing registers and list the most common types of vocal registers.

What are Vocal Registers?

Every person’s voice is capable of resonating within a particular musical pitch range. This range can be thought of as a set of usable sounds that form the lowest and highest vocal notes, as well as any in between.

In classical or opera singing, the usable range is defined by each pitch’s timbre and projection (timbre refers to a note’s unique quality or musical tone, whereas projection is the level of amplification).

A person’s vocal range is usually thought of in terms of different sections or registers, which are separated by something called breaks.

These sections are categorized by the type of vocal cords which vibrate, the pharyngeal shape, and where the voice resonates in the body while producing a sound. Break notes are usually the hardest point for the vocalist to reach and are the transition zones between lower and upper register singing.

What are the Four Vocal Registers?

Starting from highest to lowest pitch, they are:

Over time, the term ‘falsetto’ has been used to mean various things. However, most modern musicians use it to describe the highest-pitched register that a male vocalist can reach. This way, a man’s highest vocal notes mimic those within a female’s head voice range.

Women are also able to use this technique to sing at an even higher pitch. Just remember, the ‘whistle register’, hits the official top end of the human vocal range, but is rarely used as it sounds more like a squeal than song voice.

So what makes falsetto different from other high-pitched singing methods, like say, the ‘head voice’ register?

Well, here the thin edges of the throat muscles (vocal folds) in the larynx, create the unique falsetto tone when air from the lungs blows past them. Additionally, the falsetto sound comes only from the head, which puts less pressure on the throat in comparison to other vocal registers. Overall, the pitch range here is controlled by the force of breath flowing from the lungs into the skull.

The downside is that the falsetto technique produces fewer overtones than the head voice, which tends to sound fuller and ring out for longer. If you’re interested in listening to vocals in the style, check out the all-male group Chanticleer.

This is a lower pitch vocal range than both the falsetto and the whistle register, but is brighter and lighter sounding than the ‘chest voice.’ It is also the most popular singing style among musicians.

The main difference between the falsetto and head voice is that falsetto requires an open glottis, whereas the head voice lets the vocal folds narrow, for a more powerful sound. Overall, where falsetto can be breathy and hallow, the head voice projects a more balanced resonance.

In general, women don’t notice as much difference between their head and chest voice, whereas men often use falsetto as their head voice for more impact. If you’re a novice, try to limit the use of vowels to ‘ah’ when hitting a high note in this register, as this can make slurring the range easier.

While using this register, the singer will actually feel the resonance of any sound waves within their oral and nasal cavities, as well as in the bone tissue making up the skull. However, the specific tone is produced by the vocal chord’s rapid vibratory pattern and stretching of the vocal folds. A great example of the use of this vocal registration can be heard when Peter Auty sings “Walking in the Air” in “The Snowman.”

This register’s range varies between men and women. For example, in female singers, it lies between the chest and head register. Here, the difference between the first pitch range, known as ‘primo’ and the second, known as ‘secondo,’ is around one whole octave. On the other hand, a man’s middle voice is known as the ‘zona di passaggio’ and has a total range of around major third or fourth.

This register’s timbre is therefore believed to be a sort of amalgamation of tones from both the head and chest voice, which in turn, allows the singer to produce full, warm melodies. Once a vocalist masters the art of moving smoothly through this transition area, they are considered capable of mixing or blending the other registers surrounding the range.

Beyonce mixes chest and head voice effectively. Here’s a decent analysis of it:

This voice register is also known as the ‘modal voice’ and involves using the vocal folds in a more relaxed, natural manner like we do when we have a conversation. While talking, women use both their chest and middle vocal registers, whereas men use only their chest. However, when either sex sings using this technique, both will be using fully open vocal folds and will feel sound waves vibrating throughout their upper body.

This register produces a sound that is a higher pitch than the lowest, vocal fry zone, while also overlapping with the low-end of the male head voice or the middle voice of females. The chest register’s range begins and ends in different areas of the human voice, depending on the person’s particular voice type.

In terms of tone, the timbre of the chest voice is darker and warmer than the middle and head voice, with an overall mellow feel. Vocal teachers often refer to this register as either the ‘heavy’ or ‘laryngeal mechanism,’ as this singing method engages an individual’s thickest vocal folds.

How to Blend Voice Registers?

Blending vocal registers can be tough work on our body, but with plenty of time and effort, we are all capable of using them seamlessly. The goal here is to work on the difficult breaks between each voice register so that we can sing both a high singing register and a low register voice, without straining or losing power.

Most trained singers apply something called the three-register theory. With practice, this aids laryngeal function, so that the voice can move fluidly between low and high notes, while also using the mixed vocal register in the mid-range.

Some of the following techniques can help you to blend registers:

Initially, all these vocal techniques can be quite challenging to master, especially when most of us feel more comfortable using our single strongest register. Having to focus on timbres that sound weak or harsh when you can sing fairly well in one register already can be really off-putting. But, developing a range of singing styles is a fundamental part of an expert performance!

Ultimately, time, practice, and understanding will really pay off here, so don’t give up.