How Many Octaves on a Piano? (In Case You’re Wondering) 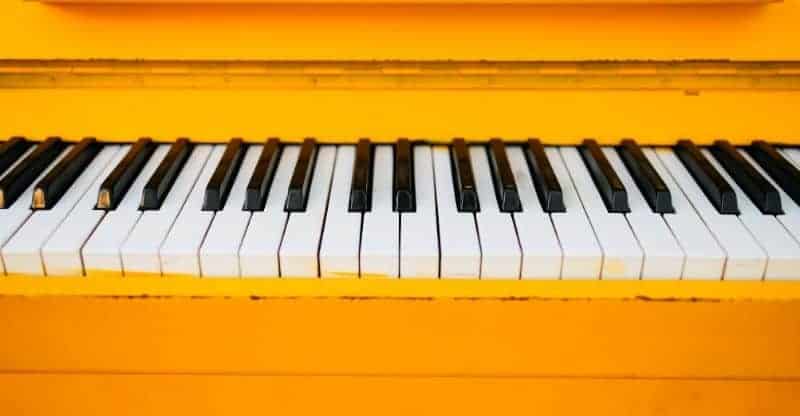 The word octave comes from the latin word ‘octo’ which means ‘eight’. Octave, therefore, means a ‘series of eight’. In music, it refers to a series of eight notes.

This is an example of an octave:

Count them, there are 8 musical intervals (or 12 semitones, if you count the accidental notes).

See how the first and last are the same note (in this case, C), a pitch apart. We refer to the last C as an ‘octave higher’ than the first one.

On the piano, an octave is made up of seven white keys and five black keys.

Ok, now that that’s cleared up, let’s get to the main question.

How many octaves on a piano?

A full size piano with the standard 88 keys has 7 octaves plus a quarter. These piano keys span the range A0 to C8, with three extra keys (B, B flat, and A).

Different size pianos have a different number of octave counts available to them.

In the rest of this post, we’ll show you the number of octaves found on different size pianos, and give you a little bit more background on how all this came to be.

The Number of Octaves on a Piano

As we mentioned in the introduction, standard modern uprights, grand pianos, and many digital pianos come with 88 piano keys as standard (52 white keys and 36 black keys), which give you seven octaves plus a minor third.

The extra quarter octave is a minor third, giving you three extra treble notes (Bb, B and C). 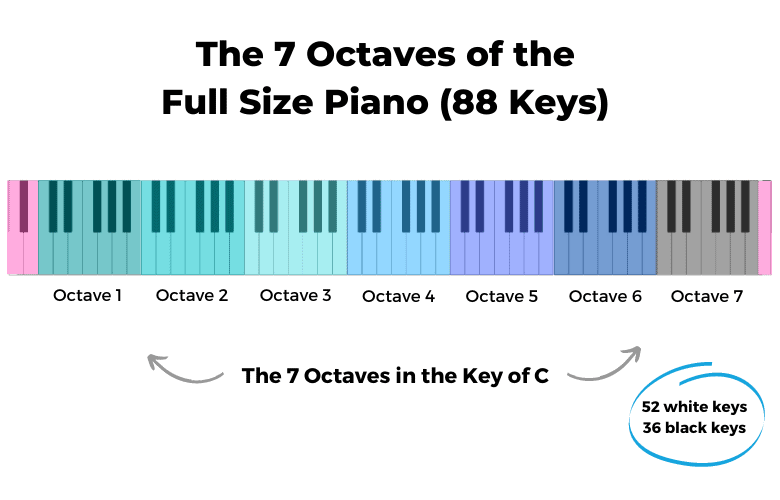 A bit of an anomaly this one, but we thought we should include it anyway.

The 85 key piano is the same as the 88 but without the three extra treble keys. They’re rare to find (many pianos made in the 1940s have this format).

You can play your standard piano songs on one of these, but there are certain pieces – such as Debussy’s Preludes, that include the top three treble keys.

It will more than suffice for learning to play piano and you’ll often find many have weighted keys and touch sensitivity that brings a lot more feel.

5 octaves is the standard for electronic keyboards with a range large enough for most pop music, but still relatively easy to transport.

They’re great for learning the basics of the instrument too.

These small pianos have spring-loaded keys and a great first furor into the piano, but you’ll soon outgrow it if you get serious about playing.

Super small keyboards are often used for composing electronic music. They have spring-loaded keys that don’t make any audible sound, rather they’re designed to be hooked up to a computer via a USB or Midi connection and controlled with a piece of music production software called a DAW (which stands for a digital audio workplace).

From 4 to 7 Octaves – A Short History Lesson

The history of the piano is fascinating.

It was invented by the Italian Bartolomeo Cristofori (1655–1731) in the late 17th century.

In 1688, he was appointed to the Florentine court of Grand Prince Ferdinando de’ Medici to manage his harpsichord collection. He was frustrated by the harpsichord’s lack of volume, so went to work making something better.

Necessity is the mother of invention, as they say.

Cristofori ended up inventing the ‘clavicembalo col piano e forte” (which literally means ‘a harpsichord that can play soft and loud noises)’  – you can see why the shortening to ‘piano’ made sense!

This instrument with the impossibly long name had a range of just four octaves over 54 rather than 88 keys.

It was both a stringed and a percussion instrument, had thin strings and hard hammers, and produced a timbre closer to a harpsichord than a modern piano but was a lot louder.

The late 18th century to the mid-nineteenth century period was huge for the piano and saw some significant innovations in the piano fuelled by composers such as Bach demanding more dynamic range.

By the 1820s, seven-octave pianos were well established, thanks largely to the work done by piano maker Broadwood (played by Joseph Haydn and Ludwig van Beethoven)

The number of keys has changed dramatically, from as little as 32 keys when the piano was first developed, to up to 96 keys on a modern Bosendorfer Imperial.

So there we have it, everything (pretty much) you needed to know about octaves on the piano.