What are the Parts of a Piano Called?…And What Does Each One Do? 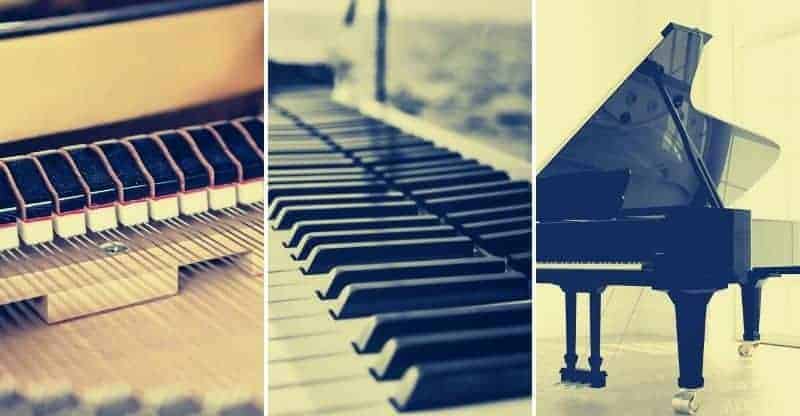 The Italian Bartolomeo Cristofori invented the piano in 1698 – an instrument that could hammer rather than pluck strings.

Despite all the advancements in technology since then, the fundamentals of the instrument have remained the same for over 300 years.

Regardless of whether it’s a concert grand, baby grand, or an upright, pianos all share a number of characteristics that make them a piano.

In this guide to piano anatomy, we’ll walk you through the basic parts of a piano you’d expect to find on an acoustic piano.

Note: The parts here refer to acoustic pianos, not digital pianos (though digital pianos do share one or two things such as a keyboard). Pianos have plenty more parts than we’ve included here – it’s said that pianos have upwards of 12,000 individual parts!

The case (or ‘body’) is the wooden housing of the piano. It’s also the thing that adds the most weight (which you’ll know all about if you’ve ever tried to move a piano).

Of course, both the weight and the size differ vastly depending on whether it’s an upright (there are many types of upright) or a grand piano.

The fallboard (or key lid) is the hinged piece of wood that folds down to protect the keys when the piano isn’t in use.

The lid, also called the top, is a section of wood (typically hardwood) used to protect the playing mechanism inside the piano It’s held open by a wooden stick called a lid prop, and often you get a smaller stick called a half-prop, used to keep the lid partially raised.

Opening the lid on a grand piano will improve tonal resonance (it acts as a reflecting surface for the sound waves coming from the soundboard) and will result in a much clearer, more resonant sound. This is why you often see grand pianos with their lids up.

In terms of positioning a piano in a room, the open lid (treble side) should be pointing into the room.

The outer rim design of the modern piano was invented by C.F. Theodore Steinway. Before Steinway introduced his rim bending method in 1880, case making for grand pianos was much more complicated and expensive.

Let’s start with the keyboard, perhaps the most obvious part of a piano, and the place where the pianist comes into touch with the piano (as well as the pedals, of course).

The piano is a string instrument, so there’s no surprise you’ll find strings inside.

For each key, there are three wound steel wires that run from tuning pins on the pinblock (see below) to the hitch pins. When a hammer strikes them, the vibrations turn into sound.

Tuning the piano entails changing the tension of the strings (tightening or slackening the tension), as each string is tuned to a specific sound or musical note.

The keys are attached to small, felted mallets. When a key is pressed, the hammer strikes the strings causing a resonant vibration.

When you press a key and then release it, you’ll notice the ringing stops (unless you have the sustain pedal activated). That’s because when a key is released, small, triangular felt pads called dampers rest on the strings to stop them ringing. This prevents the notes from bleeding into one another.

All stringed instruments have a soundboard, including of course the piano.

Sometimes referred to as ‘the belly’, the soundboard is made of wood and acts as a large resonator – transforming string vibrations into audible soundwaves. You wouldn’t hear much without one.

They’re usually made with Sitka spruce wooden planks that are glued together then cut to size.

The pinblock (or ‘wrest plank’ as it’s sometimes called) sits snugly between the plate flange and the case and has tuning pins driven into it. Strings are then wound around these pins (the other end of the strings are attached to hitch pins on the plate near the tail of the piano).

The quality of the pinblock is crucial for tuning stability.

To stabilize the structure of the grand piano, a cast-iron plate is there to absorb the tension from the strings and is in fact the only part of the piano that does not resonate.

There are usually three pedals (foot levers), but every so often you come across a piano with only two.

The purpose of piano pedals is to vary the tone. The most common effect is the pedal on the right, the damper or sustain pedal, which prolongs the length of the notes (basically lifts up the damper bar and stops it from touching the strings). The soft pedal (further left) is used predominantly in post-Classical music producing melodramatic tones.

Used for dynamic range, these are levers that connect the piano keys to the hammers. They respond to the force and velocity that the player strikes the strings.