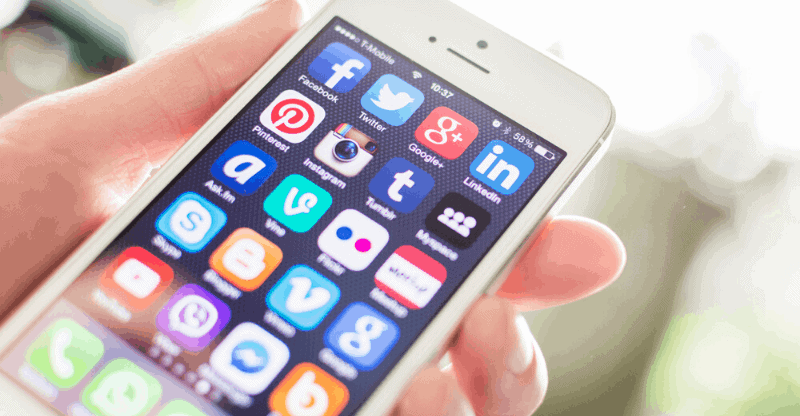 I get it. You’re a musician and want to be writing songs and making music, not messing about tweeting, posting, vlogging or any of that nonsense.

But here’s the truth:

If you want your music to go big, you need to get into social media.

Making music isn’t enough, you need to promote it. Regardless of whether you use social media or not, you have to accept most others do.

Facebook alone has two billion daily active users and Instagram isn’t far behind (one billion users daily). Your audience is there, no doubt.

So here are our no-fluff guide to social media for musicians.

It’s easy to get overwhelmed with all the social media networks out there. Let’s take a look at the ones worth your attention.

As we mentioned in the intro, Facebook has close to two billion users (that’s nearly a third of the world’s population) so it’s the first one to dabble with as a musician.

Used in the right way, it can be powerful allowing you to target and promote your content in a variety of clever ways.

To begin with, you just want to focus on building up a band page.

A page allows you to create a hub for your music. Every time you post something to your page the people who’ve liked your page will see your new post in their timeline.

YouTube is the world’s second-biggest search engine (after Google) and used effectively, can work wonders for your music.

Video tutorials go down really well if you fancy teaching your fans how to play some of your songs.

It builds engagement with your fans and helps with driving traffic to your website (if you have one) which can be a potential revenue earner once you get a decent amount of views.

Facebook is a social network and is great for engagement, whereas Twitter is a micro-blogging tool and works more effectively as a broadcast or news channel.

Twitter is where music industry professionals are more likely to hang out.

Just think about how many stories break these days on Twitter rather than by traditional news outlets. You may find fewer fans on Twitter, but Twitter shouldn’t be discounted as a waste of time.

Use Twitter for announcing upcoming tours, new song or album releases and sharing anything that’s remotely newsworthy about your band.

With over 600 million users sharing millions of photos & videos every day to their network.

Share pics of you and the band in various situations (backstage, in the studio, on a press shoot) is a simple tactic for growing your reach.

How to Grow your Followers and Build Engagement

You know which platforms to start with, but how do you grow your followers and keep them engaged?

First up, you need your profiles to accurately reflect you or your band. No one is going to want to follow you if it’s not obvious who or what your band is.

Spending a bit of time making sure they look great will pay off big time. Here’s what you should do:

Here’s a good example of Wilco’s profile on Twitter. A cool band pic and a mention of their latest album 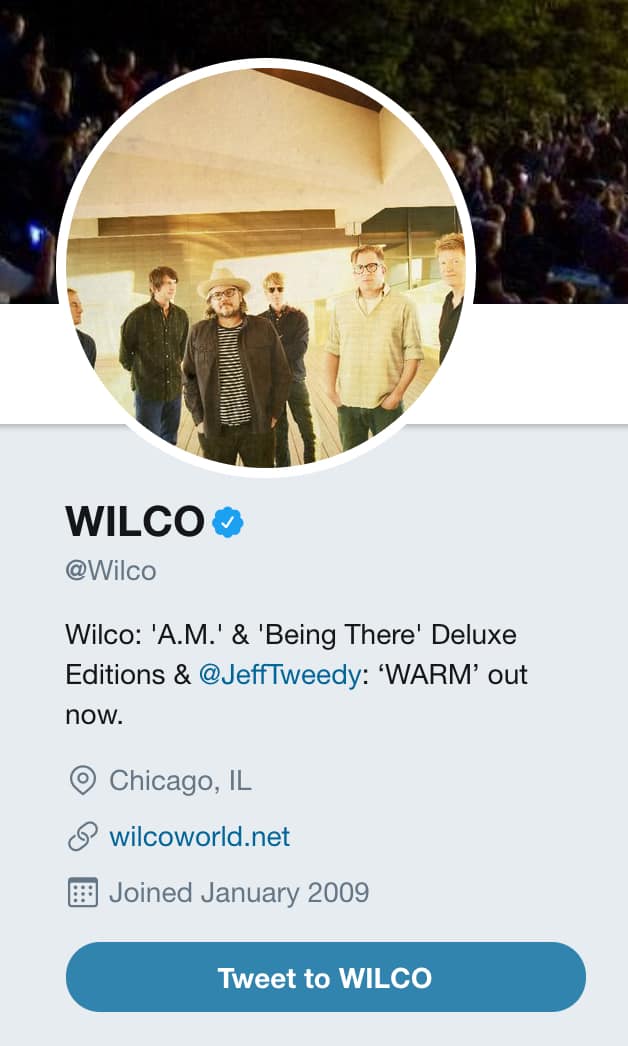 Hint: if you need a hand with branding, you can find some great music design templates over at Placeit.

You’ve got your profiles looking cool. Check. What next?

Well, assuming you’ve invited everyone you know – all the obvious people, like other band members (if you have any), existing fans, family and friends.

Once that’s done, its time to start engaging people.

What type of stuff should you share? The best advice here is the rule of thirds.

If every time you post something online its promotional, your fans are going to quickly get sick of you.

By following this simple rule, you won’t ‘burn through your fans’.

Keep Your Followers in the Loop

Whatever you’re up to, so long as it’s related to your music, or even if it isn’t (but it’s fun or interesting), share it.

Any new gigs or albums or singles are obviously fair game.

The trick here is not to stay silent for too long.

Little and often is definitely better than months of silence and then a barrage of posting cos you have a new album coming out.

Scheduling tools such as Buffer help with keeping a steady drumbeat of content hitting your channels without you having to stay plugged in 24/7.

If you’re regularly playing live, posting pics from the gig is a great way to make fans feel part of the experience.

If you’re lucky to have the kind of fans who take pics at your gig and share them on social media, repost them on your feed and give them a shout out.

They’ll love you for it.

Get in the habit of tagging other musicians, bands, events, venues, even brands.

Every time you do this, you increase your chance of them reposting it to their followers, and thus amplify its reach.

With these few tips, you’ll be way on your way.

The key thing is to do little and often and don’t let it become burdensome.

As you build up some momentum, you’ll find it a huge source of inspiration as a band is nothing without fans, and social media puts you in close contact with them in a manner that was unheard of just 10 or 15 years ago. Not bad, eh!

Of course, you’ll need a decent band name to begin with, so check out our name generator for inspiration.