You can really get yourself in a mess if you use the incorrect fingers on the violin, which has no frets to guide you instantly back into place (to help with this we recommend applying finger tape to the fretboard).

First position covers the notes at the top of the violin. This is the section closest to the pegbox. Staying in this position means you won’t be moving your hand around, just your fingers. You’ll be in first position for a while as a beginner and, as you’ll see in the chart below, plenty of notes lie within it.

Pretty much every violin notes chart you’ll see will be in the first position, as once you master that, it’s easier to grasp other positions without the visual aid. 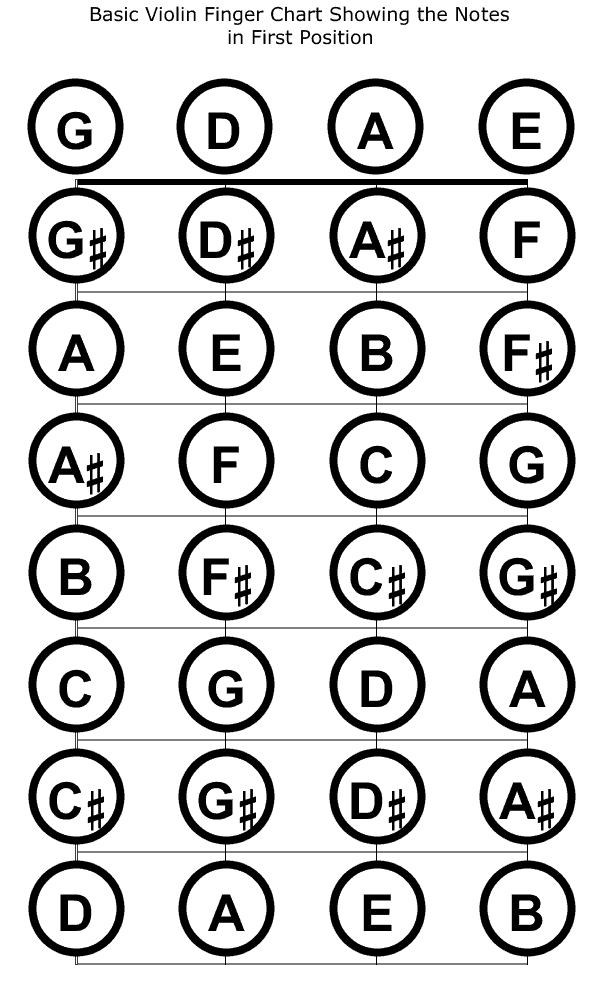 For example, the first note on the G string – G# – could also be called an Ab in certain circumstances. It’s nothing to worry about at the moment, but it is something to be aware of in both violin and general music.

There are exceptions to these rules, but they’re generally something to stick to, especially in the early days of your learning.

Now, let’s look at a chart that shows the notes of the G major scale.

You can see the finger numbers at the side of the chart. Each note in blue is a ‘member’ of the G major scale, which is one of the first scales you’ll learn to play on the violin. 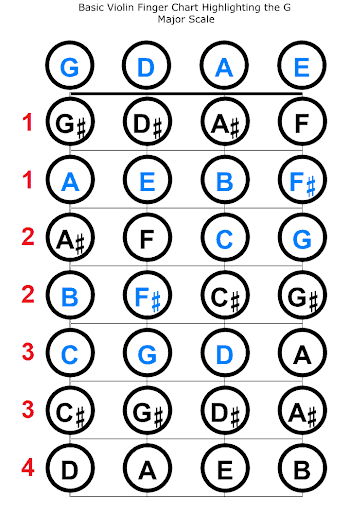 The scale’s split into two easy to remember patterns. On the G and D strings, the first and second fingers are a whole note apart, whilst the third finger is just a half note away.

On the E and A strings, the middle finger is close to the first finger, whilst the third finger is a whole note away.

However, we’ve not included the third finger’s note on the E string, because G is where the scale ends.

A violin fingerboard chart can also be a helpful way of making sense of note reading.

The musical stave is just another chart, really. It shows you where the sounds are that you’re playing. If you look at the notes on the D string using fingers 1, 2, 3, and 4, you’ll see that they’re: E, F, G, and A.

Your finger are sort of climbing, like the notes on the stave below.

It might take a bit more time than just searching for a picture, but you will learn deeply and remember the shapes much better.

Each piece of music you play is in a key, and all of those keys have a scale. Some to start with on the violin are:

That should keep you busy for a while 🙂