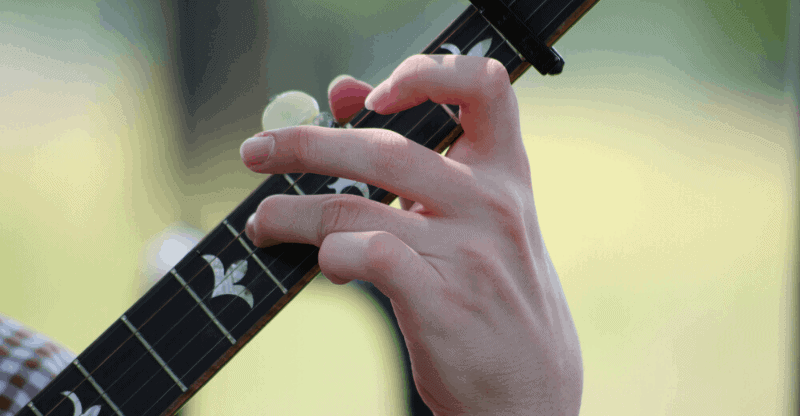 If you’re learning the banjo, you’ll know a lot of the popular banjo songs are in ‘open G’ tuning, popular with banjo players such as Scruggs, Fleck, and Trischka.

In this article, we share the most popular 5 string banjo chords in this tuning.

The order of the strings in open G are as follows: 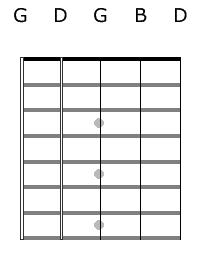 On a 5-string banjo, the fifth string – G – is the highest string, whilst D, G, B, and D ascend in pitch. The high G string also doesn’t start until the fifth fret.

How to Read a Banjo Chord Diagram

Chord diagrams are individual pictures that tell you where to put your fingers for different chords. Here’s a labeled up chord diagram, with everything you’d expect to find: 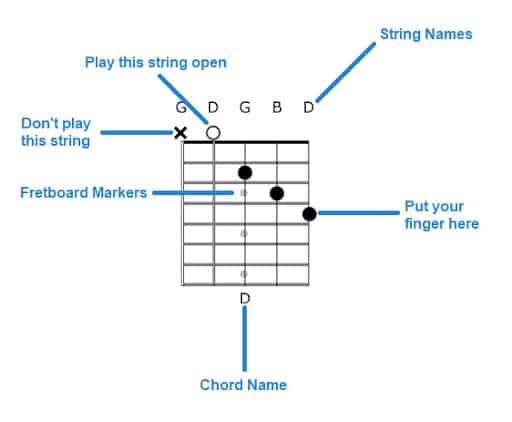 Sometimes, string names might be written above the diagram, with the chord name on top. Other times, there might be fret numbers included down the side. However, the fundamentals remain the same, including the orientation and symbols used.

Now you know how to read a chord diagram, we’ll show you a selection of the most popular chords in six of the most popular keys. These shapes will take a bit of learning and aren’t as easy as say mandolin chords (which are symmetrical shapes), but once you’ve got them memorized and you’ll be well on your way.

Our first chord chart contains a selection of chords in the key of F. Keys are like ‘families’ in music and it’s always worth knowing which ones go together. This make learning new songs easier and even help with writing new compositions. 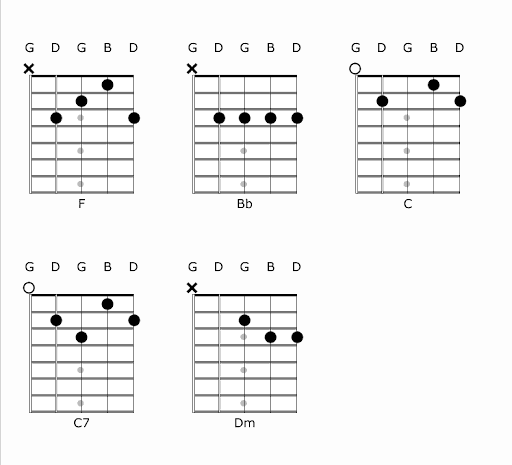 The second ‘family’ is the key of C. With all of these keys, the chords chosen are the tonic (first), fourth, fifth, fifth with a dominant seventh and the sixth chord which will be minor. This is because they’re the chords most commonly used together, particularly in the bluegrass style. 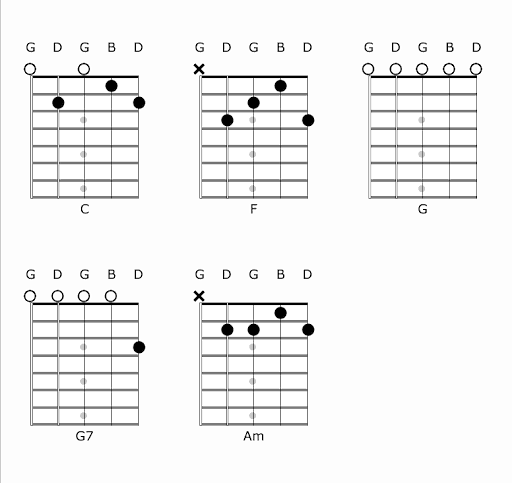 The key of G works especially well in this tuning, which is one reason why it’s one of the most common keys in banjo music. To play the tonic, you needn’t even use your fingers! The fifth string (high G) also works particularly well as a droning note for songs in this key. 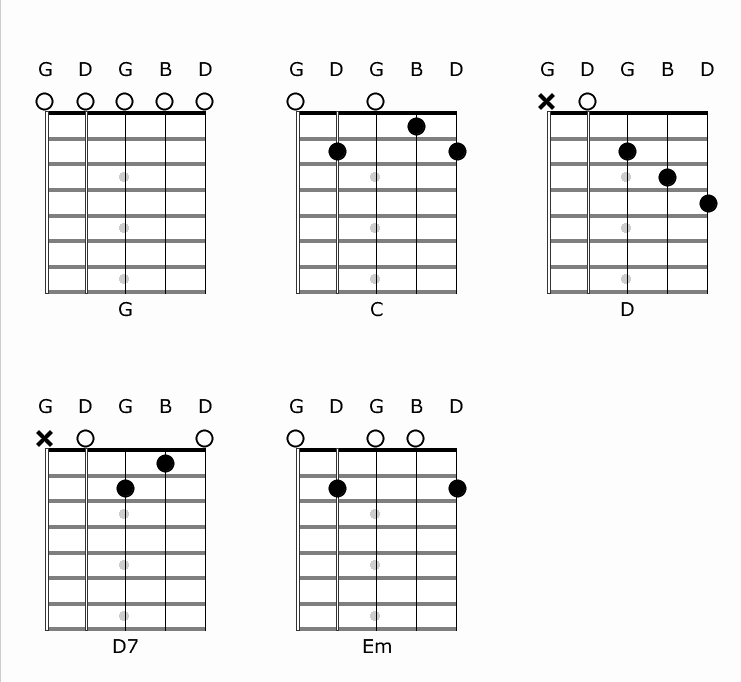 The next chart features chords in the key of D. This is another fairly common one in bluegrass music and does include the open G chord, though the other chords listed below don’t work particularly well with a droning high G string, hence the crosses above that string. 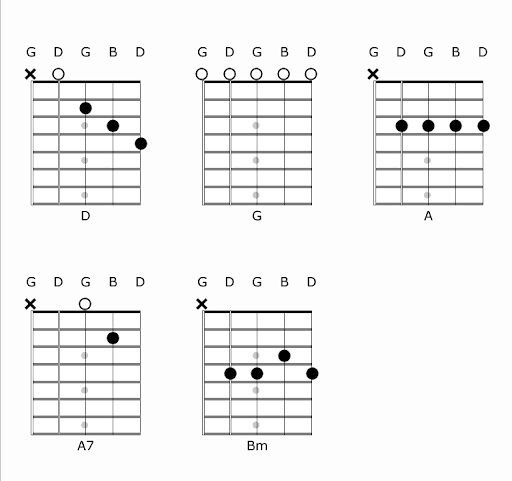 Next is a bunch of chords in the key of A: another common key. The banjo A chord is very similar to the guitar A chord, with all fingers belonging in the second fret. The difference, here, is that there are four strings to cover. 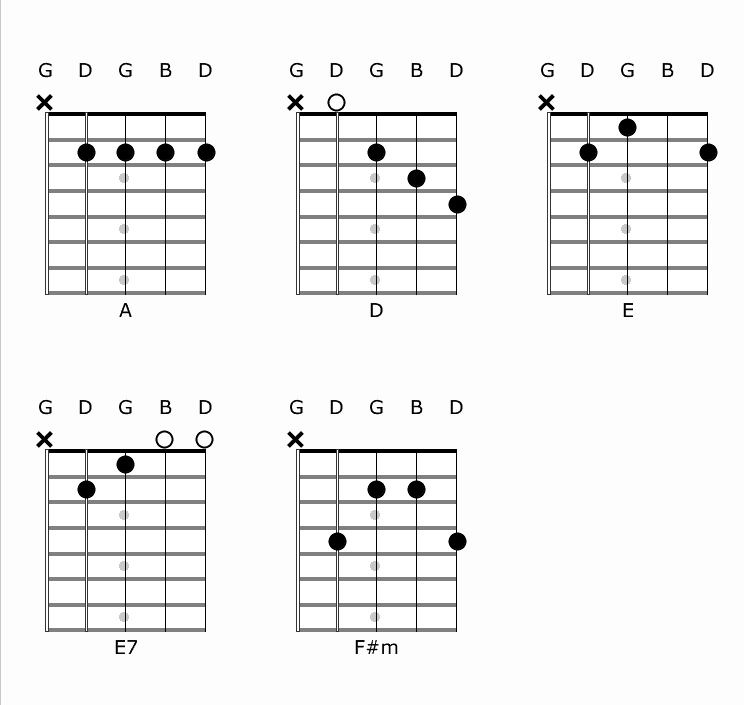 Finally, here’s a banjo chord chart in the key of E. This is another often-used key and includes a B chord, which is just like an A chord but moved up two frets. 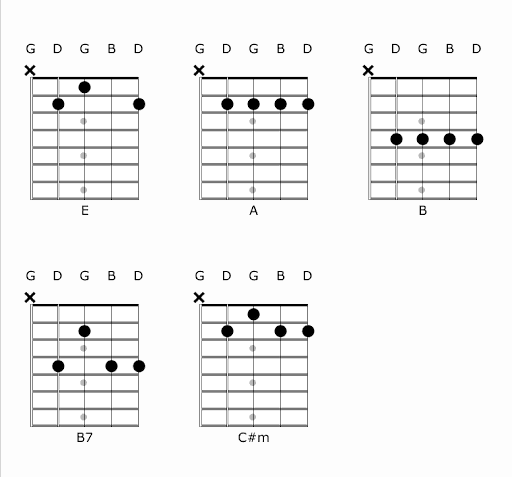 As you can see, there are quite a few banjo chords to learn to play.

It’s worth choosing a song that you particularly like and finding out which banjo chord it starts on. That chord will be the tonic, giving you the key.

Once you’ve mastered and memorized one key (or ‘family’), take on another. The key of G is very common in banjo music but it’s far from exclusive. Take on as many of these shapes as you can; they’re the weapons you need to become a banjo master!