How to Play the Banjo – The Complete Guide for Beginners 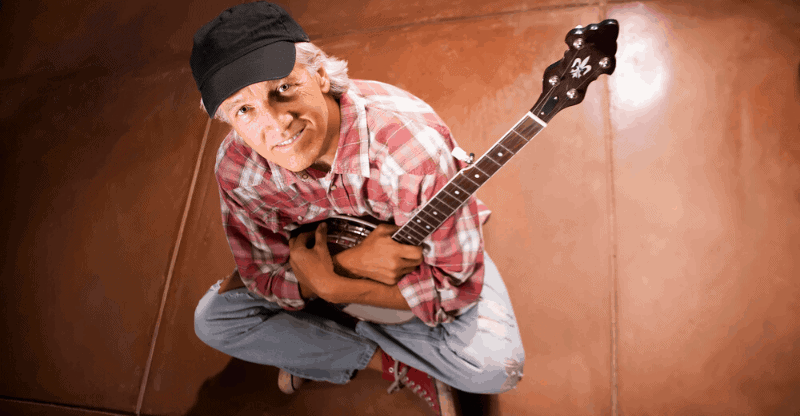 At a glance, banjos may seem just the same as a guitar, just a little twangier sounding. In reality, this couldn’t be further from the truth.

In fact, they’re a structurally diverse instrument and also a technically rewarding way of expressing your creative skills. But, with that in mind, it’s still important to get your technique right, in order to become the world’s next Bela Fleck or Tony Trischka.

In this post, we give you the crucial steps to getting started.

Decide the Type of Banjo

Before you go out and buy the first banjo you see, it’s important to consider which type you need. Banjos are quite diverse, coming with sets of either 4, 5 or 6 strings, all of which work best with folks of different experience levels and musical preferences.

4-string ‘tenor’ banjos are usually the best choice for beginners, seeing as having fewer strings is easier to get your head around when it comes to theory and because the smaller fret spacing is less of a stretch on your fingers. Fewer strings also mean they’re a bit easier to tune (although there are a variety of ways to tune a tenor banjo).

In regards to style, these instruments are often sought after by Dixieland Jazz or Irish folk musicians, so would make an especially good choice for any novices interested in these genres. They are sometimes referred to as plectrum or tenor banjos, as you play them using a pick to strum chords and melody notes.

Standard models have 19 frets, whereas the Irish variety have 17.

5-string models are the most traditional variety of banjo, with the extra 5th string adaptation being thought up by African predecessors.

You’ll most often hear these instruments being used by Bluegrass and folk artists, but just remember, the additional range of notes will require some time to master if you’re a beginner.

They are more complex than their 4-string brothers, due to them having the fifth string attached halfway up the instrument’s neck and an extra tuning peg on the fifth fret.

As well as this, these instruments are played using either a clawhammer technique in folk music or a thumb pick and two metal fingerpicks in Bluegrass, which will also take some time to master. So are best suited to players with some prior experience.

6-string banjos have a regular banjo body and a guitar’s neck, so are sometimes known as ‘banjitars’ (yes, really!).

Because of the extra strings and extended fingerboard, they offer the largest range of notes that produce a classic twangy banjo tone. But, when it comes to chords and scales, these instruments are played more like a guitar than a 4 or 5 string banjo, and are tuned like one too, so are most suited to experienced guitarists.

With that in mind, if you’re hoping to learn traditional techniques such as clawhammer, this variety is probably not the best option for you.

Banjos have two types of body, known as ‘open-backed’ or ‘resonators’.

Open-backed models are quieter, as the amplified sound projects outwards towards the musician rather than the audience. Traditionally, solo folk artists that use a clawhammer technique would opt for an open-backed banjo, for its softer tone and reduced volume.

Bluegrass players, on the other hand, often have to compete with other instruments so almost always go for a banjo with a resonator. This variety has an enclosed back and a wooden bowl, attached to the body’s inside chamber. This, in turn, amplifies the string’s vibration, so that the instrument produces a much louder, twangier sound with more sustain.

Just be aware that resonator banjos are often heavier and tend to be pricier than the open-backed variety (due to the use of extra material), so it may be worth opting for an open-backed model if you’re a novice shopping on a budget. However, if you’re experienced and have been saving up, then, by all means, go for a resonator.

Different banjos require specific tunings, so it’s important to get this right before trying to learn a song or lick. Once you know what you’re doing, banjo tuning is easy – just remember to use an electric tuner to get the notes perfect.

5-string models are most commonly tuned in open G, in ascending order of GDGBD. This means you can strum all the strings simultaneously to play a G chord, without having to press any fingers down on the fretboard.

If you’ve got a four-string and want to play Dixieland Jazz, then the standard choice is to tune is CGDA. This is the same tuning that mandola and viola musicians use, with intervals of fifths between each string.

Another option is to use Irish Tenor Tuning, which works well in folk music. The strings here will be set to GDAE in ascending order, an octave lower than the standard 4-string tuning.

If you’ve got a 6-string banjo, then you’ll need to tune EBGDAE, in descending order, just like a guitar.

Once you’re all tuned up and ready to go, you’ll need to place your body and hands in the right playing position.

Remember to cut your fingernails on the left hand, as long nails can prevent your fingertips fully pressing the strings down.

Additionally, your wrist should fall in line with your hand to avoid injury. If you play with too much of an angle in your wrist, you run the risk of developing carpal tunnel syndrome.

Whilst it’s true that there are several different picking techniques, luckily, they’re all based around one fundamental idea – producing a melody and decoration.

In general, you’ll be using the thumb, index finger and middle finger for picking and will be sweeping your fingers downwards across the strings to pluck each one. At all times the ring and little finger should be resting on the banjo’s head.

If you want to play the old-time 3 fingerstyle, you need to add another finger into the playing style to create a “3 finger” arrangement. This means the player loses some of the 1st string drone notes but gains some decorative notes by using the other strings.

Overall, this switch which can either lead to the musician playing more of the harmony or doubling the melody notes.

Now let’s take a look at Scrugg’s 3-finger picking style. Interestingly, the differences between the 3-finger “Scruggs” style and the 3-finger “old-time” technique are rather small.

The main difference is that we add some additional syncopation. This means that some of the melody’s notes no longer follow the beat they normally would and instead follow the next eighth note. Scruggs also tended to incorporate extra licks into rest sections of songs, especially when the melody notes were played using open strings.

In banjo talk, the term ‘roll’ stands for the basic picking pattern that follows an 8th note arpeggio. Rolls are played using the thumb, index finger, and middle fingers so that you hear several different strings ringing out in a bar. Most rolls require the musician to play a repetitive picking pattern, like 5-3-1-5-3-1-5-3, which is known as a forwards roll.

Just remember, the numbers here are not related to the frets, instead they stand for the string number that should be plucked. While playing a roll, each right-hand finger should be allocated to one string only, to help keep your picking organized.

Here are five basic rolls to get you started:

Keeping the right rhythm going when you try out more complex rolls can be a challenge at first, so to get around this issue always practice with a metronome.

You’ll be able to find one in a shop or online to help you play along to a steady beat. Once you get more confident, you can try increasing the bpm, to play in a faster timing or you can try playing more complex patterns to enhance your technique.

When you’re confident about playing a variety of banjo rolls at a good pace, you should try to learn an entire song of your choice. But be ready to have to practice difficult sections over again and to attempt certain difficult parts more slowly, to begin with.

Some well-known, easy banjo songs to learn are:

As with the learning of any instrument, creating a good practice routine is key.

Get hold of a decent banjo chords chart and memorize all the chords. Do the same with scales.

In general, practicing for bursts of 10-20 minutes a couple of times every day is thought to be the best way to improve your skills. But saying that, advanced players often practice for an hour at a time.

Most important of all, have fun.