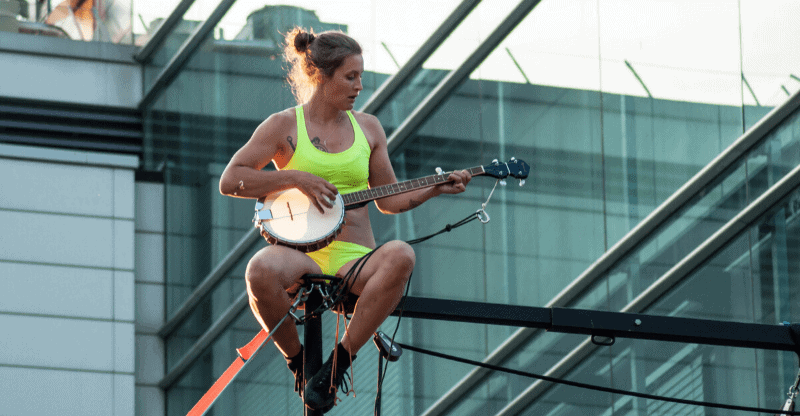 Just like every instrument, mastering the banjo is going to take a fair bit of time and practice, but learning some fun and easy banjo songs, not so much. In fact, many musicians consider the banjo an easier option than guitar, thanks to it having fewer strings to strum.

If you’re into folk or country music, you’re going to love this instrument for its authentic twang, although the banjo is more than capable of spicing up some rock and pop licks too.

There are so many banjo tunes out there it can be hard to know which ones to learn if you’re a novice. So, to make life easier, we’ve put together a list of our favorite beginner tracks.

This tune was thought up by bluegrass masters, Earl Scruggs and Lester Flatt and was featured on their album ‘Foggy Mountain Jamboree’ in 1957. The bluegrass movement actually took off in the 1940s but mainstream folks didn’t catch on right away. This record is considered a blueprint for the genre, helping it gain popularity among American radio listeners.

When you listen to this classic banjo tune, you’ll hear Scruggs using his iconic ‘three-finger’ roll technique, while he rocks a twangy, five-string banjo.

Whilst it’s true, there are other instruments, like the fiddle also adding some lively melodies here, the banjo really is the powerhouse creating the authentic country vibe. To a novice banjo player, Cripple Creek may seem pretty fast pace and technical, but after you’ve got to grips with playing ‘Scruggs Style’, every verse is made up of repeats of the chords A, D, and E, so is pretty easy to master.

American Pie was originally featured on Don McLean’s second album also titled ‘American Pie’, which was released in 1971. McLean’s first album never gained much recognition, however, to his delight, this song made musical history.

The song itself remains well-known and loved worldwide after it topped singles charts. Incredibly, the track has been played over three million times on US radio alone and covered by famous artists like Madonna!

Don McLean was a unique musician, in that he gave his listeners a more folk-rock-pop performance rather than writing in a traditional bluegrass style. All this tone is delivered thanks to McLean’s trusty tenor banjo, which kicks out a full, yet cutting sound.

Overall, American Pie is a great tune for beginners to learn as the tempo is slow and steady, with a melody composed of repeating sets of easy banjo chords.

Blowing in the Wind

Blowin’ in the Wind was written by the legendary Bob Dylan and was released as a single in 1963. The song was featured on his second album titled ‘The Freewheelin’ Bob Dylan’.

Blowin’ in the Wind’s lyrics are especially clever as they focus on war, humanity, and peace as a sort of protest to the government. The song is incredibly famous and was inducted into the Grammy’s Hall of Fame in 1994 as well as making number 14 in the ‘Rolling Stone’ magazine’s ‘500 Greatest Songs of all Time.’

The folk group ‘Peter, Paul and Mary’ covered Blowin’ in the Wind in 1963, but incorporated a banjo into the music, so make sure to check out this version to hear how it sounds. When you listen to it, you’ll notice the pace is fairly steady and that the majority of chords played are C, D, and G, with an occasional Bm, making it a pretty good banjo tune for beginners.

Hush Little Baby was written by the singer-songwriter-activist Joan Baez and was released in 1963 as a track on the album ‘Joan Baez in Concert Part 2’. You’ll probably already recognize this as a childhood lullaby, sung to you by your mum or dad, however, it was thought to have originated in the Southern States of America before Baez’s release.

As a musician, Baez focused on writing in a folk style but also highlighted the social protest movements of her time in a similar manner to Bob Dylan. Additionally, she often sung about spirituality and has written and performed several gospel songs in her time.

In her 1963 version of Hush Little Baby, Baez uses an acoustic guitar to accompany her vocals, but the tune works really well on banjo too. This is by far the easiest tune we mention, as there are only two chords in the entire song. The riff’s tempo also goes at a tranquil, relaxing pace so you’ll have time to move your fingers into position for the next chord.

This classic country song was first written by June Carter Cash and Merle Kilgore, but was made famous by Johnny Cash in 1963. Johnny’s version of Ring of Fire was a huge hit in the USA, ranking number 4 in CMT’s 100 Greatest Songs of Country Music in 2003 and number 27 in Rolling Stone’s 100 Greatest Country Songs of All Time.

Although originally Ring of Fire was originally recorded with an acoustic guitar, Cash used the key of G, making the tune easy enough to play on both tenor and five-string banjos too. In particular, the song’s verses are especially simple, with the only chord strummed being G. The chorus then uses D, C and G chords to produce the tune’s melody. That said, the tempo is slightly faster than say, Hush Little Baby, but is easy to grasp if you start learning slowly.

She’ll Be Coming Round the Mountain

We’ve all heard this at some point as a kid, however, She’ll Be Coming Round the Mountain is actually a very old, traditional folk song. Interestingly, this tune is said to derive from a Christian spiritual number, titled ‘When the Chariot Comes’, sung in the same melody. The original song dates back all the way to 1899 when it was published in the songbook ‘Old Plantation Hymns’. It is said to have been adapted by railroad workers to the classic we’re familiar with today.

The first recording of She’ll Be Coming Round the Mountain was recorded by Henry Whitter in 1924. Whitter tended to strum along strong rhythm sections on his guitar, whilst another musician played the melody sections on a fiddle, so using a tenor banjo is recommendable. The tempo here is pretty steady, however, you’ll need to learn to play some slightly more advanced A and D dominant seventh chords if you’re looking to master this piece.

This is another easy banjo song thought up by legendary bluegrass musicians Earl Scruggs and Lester Flatt. Ground Speed was featured on the album titled ‘Foggy Mountain Banjo’ which was released in 1961.

Of course, with a composer like Scruggs the banjo’s rhythm and melody sections involve a lot of three-finger style picking at a relatively fast pace. This requires the musician to use picks on the thumb as well as the index and middle fingers to pluck the strings. Luckily, this tune is played in the key of G, so it isn’t too complex in terms of tuning or chord placements.

Ground Speed works best on five-string banjos, seeing as they have the extra fifth drone string and a loud twangy tone for that characterful country sound.

Wagon Wheel has an interesting history, with its chorus being recorded by Bob Dylan in 1973 and its verses written by Ketch Secor of the Old Medicine Show 25 years later. The tune itself was finally released in 2003 and became a famous country hit. The lyrics describe the long, painstaking journey of a hitchhiker traveling across America to North Carolina to meet his lover.

Bob Dylan originally played Wagon Wheel on an acoustic guitar, so it’s best to use a four-string tenor banjo when you replicate this tune. The song itself is played using a steady paced, 2/4 time signature in the key of A major. There are four main banjo chords forming the recorded riff, in the pattern A, E, F# minor and D however, alternative chord patterns are available depending on the key you prefer to sing in.

This is a traditional country-folk song that is strongly associated with the American Southeast. Cotton Eye Joe is believed to have been written before the American Civil War and was often sung by slaves working in Texas plantations. Some even go as far as to describe the tune as ‘The South Texas National Anthem’! The term Cotton Eye has a darker meaning however, as it refers to folks that have been blinded by drinking wood alcohol or moonshine.

The tune has been made famous by the likes of Bill Monroe, the Moody Brothers and by the Swedish band Rednex, so most experienced banjo players will likely already know and love it. Most versions of Cotton Eyed Joe are played in the key of A major, but due to its popularity, several different melodies and phrases also exist. The tune works best on a five-string banjo, using Scruggs style picking for that country vibe.

Dirty Old Town was originally written by the social activist Ewan MacColl, but was later released and popularised by ‘The Dubliners’ in 1968 and the ‘The Pogues’ in 1985. The Dubliners wrote traditional Irish folk songs and are considered one of the most influential Irish acts of the 20th century. The group retired in 2012 after being awarded the ‘Lifetime Achievement Award’ by BBC Radio 2 Folk Awards and after their founding member Barney McKenna passed away.

Dirty Old Town actually refers to the bleakness of the city of Salford in Greater Manchester, but having a good time in spite of the industrial atmosphere. The Dubliners perform this song using a tenor banjo tuned to GDAE, in the key of G major. The tempo is nice and slow, so you can easily get away with plucking the melody or strumming the simple chord pattern.

Buffalo Gals is a traditional American folk song, said to have been written in 1844 by John Hodges. Hodges was a blackface minstrel who performed under the name ‘Cool White’ across the states. The song became a hit after its release and was featured in 1940’s films such as ‘Texas’, ‘Dixie’ and ‘It’s a Wonderful Life’. The term ‘Buffalo Gals’ is believed to refer to female dancers that worked in bars and brothels within the Buffalo New York region.

The final song on our list is Brown Eyed Girl by Van Morrison. The single was released in 1967 and became a hit almost immediately, reaching number 10 on the Billboard Hot 100 and spending 16 weeks in the charts! Even today, Brown Eyed Girl is still considered Van Morrison’s signature record.

The track’s lyrics are romantically themed and refer to Morrison’s former love and idealistic countryside landscapes. At the time of the record’s release, however, some of the lyrics had to be reworded as radio stations considered parts like “making love in the green grass” too suggestive for their listeners’ ears.

Of course, being a rock-pop song, Brown Eyed Girl is no Cripple Creek, but still makes a good song for beginners to learn. Better still you can play it on any type of banjo, depending on the tone you want and style you want to play in.

If you want to pluck the strings in a country or folk style, use a five-string. If you want to strum the chords and sing along, use a four-string to play the Gmajor, Cmajor and D7 chords that make up the riff.