Guitar Arpeggios: How and When to Play Them 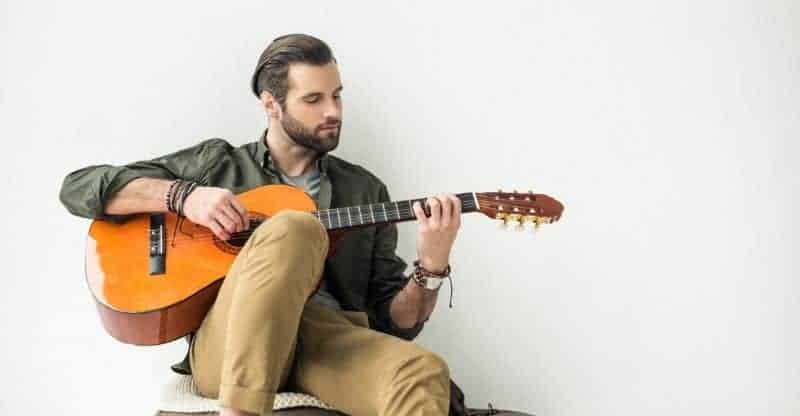 Arpeggios are a superb way of adding color to your playing.

As well as being used as an alternative to strummed chords, they can be used for melody-building, improvisation and for speedy tricks like sweep or alternate picking. They’re also the most direct way to solo over chord progressions.

Most decent guitarists have them in their tool kit. Yet, as a learner, you might shy away from them, for fear of not understanding what they are or how they work. Well, there’s no need to worry.

In this article, you’ll find out what they are and how to use them. The good news is, if you have a basic understanding of chords, you’re already most of the way there.

What is an Arpeggio?

When you play an arpeggio, you play the notes of a chord, but instead of playing the notes together you play them one by one. This can be done with standard major and minor chords, as well as more complex ones like Major 7th, Dominant 7th, 9th, 11th and 13th.

So, what’s the difference between them and scales?

When and How to Use Them

Knowing when to apply them is one of the commonest issues. Here are the most common ways:

They work best over their matching chords. Unlike scales, which you can play around with as chords change, you change arpeggio each time the chord changes.

Take a chord progression like G, C, E minor, and A minor. If you were to play a scale over it, you could choose a G major scale as this progression is in the key of G.

But to make it more interesting, you could play arpeggios instead, matching each with the chord.

Playing Over ‘Problem Chords’ in a Progression

Some chord progressions, however, are trickier – especially in jazz guitar, where the number of chords tends to increase (as well as the complexity e.g. diminished chords).

Arpeggios come in really handy in these situations e.g. when you’re playing lead over a chord progression that has chords which all fit a key, apart from one.

When one of these ‘problem chords’ comes along, you can switch from the scale of the key you’re in, into that chord’s arpeggio. It’s a smooth, stylish trick that works well.

See the example below, where an E7 is thrown into a chord progression in G major.

So what’s the best way to memorize them? We recommend you use the five CAGED shapes as a basis to learn the patterns.

In the chart below, we’ve included the five main shapes, which are based on C, A, G, E and D chords. For each chord shape, there’s a corresponding triad shape. 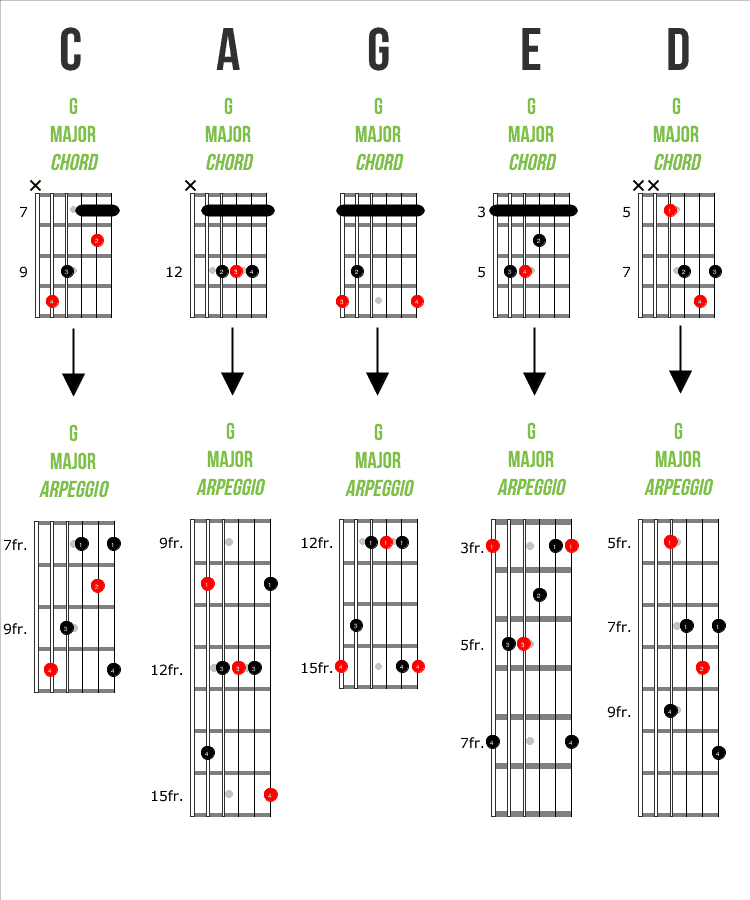 It’s essential you memorize these shapes.

The E-shaped one is probably the most common, especially if you’re already familiar with barre chords. This involves barring the third fret across all the strings, with your index finger. When you do this, the root note is the low G on the E string, just like when you play an open G chord. Then, you put your middle, ring and little finger into an E chord shape just underneath it. Play each note one by one and voila!

The A-shaped one is the second simplest. Bar fret 10 on all the strings except for the top E, so your root note is the G on fret 10 of the A string. When you play the barre chord, you put the remainder of your fingers into an A shape on fret 12. However, the arpeggio requires a couple of extra notes to keep its 1-3-5-8 pattern. Play fret 10, then ret 14 on the A string, before playing the A chord shape across fret 12 of the D, G and B strings. Then, play fret 10 on the high E and finally finish on fret 15 of the same string, which will also be a G.

Important: As you progress, practice playing each shape ascending and descending, as well as moving from one shape to another horizontally. This will encourage you to remember the shapes and soon your fingers will be able to play them without you thinking about it.

Here are those shapes again, horizontally this time, to make them easier to read.

Minor triads are the logical next step after you nail your major shapes. Like the major shapes, they can be learned using the C, A, G, E and D shapes, only this time Cm, Am, Gm, Em, and Dm.

Am, Em, and Dm are probably the easiest to get your head around, as they’re shapes that you’re used to from open chords.

Cm and Gm are unfamiliar shapes to beginner guitarists. However, the only difference between a minor and a major arpeggio is that the ‘third’ – i.e. the second note – is taken down one fret. So, in a G major arpeggio using the C shaped position, instead of playing G on A fret 10 followed by B on D fret 9, you play G on A fret 10 followed by B flat on D fret 8. The rest of the pattern stays the same, right until you reach another B (which must be flattened).

Like 7th chords, these patterns work well in blues music and are an excellent way of spicing up the 12 bar blues. Here are the positions for G dominant 7.

As you get used to different patterns, you can also try them with different picking techniques, such as alternate picking, legato, sweep picking, and tapping.

That brings us on to a final note on form and speed. As you practice these, particularly if you’re trying sweep picking, make sure that you lift your fingers immediately after playing the notes. You don’t have to go completely off the strings, of course, but it’s important to release pressure from the fretboard. The separation of notes that this creates produces excellent clarity and makes the speed even more impressive.

If you are one of those players who really want to be able to play fast, we hear you. But remember, it’s always important to play slow, first. Nail the form, get it perfect, then when you’re comfortable slowly increase the BPM while practicing on your metronome. Anyone can play fast sloppily. It takes a player who has mastered slow playing to play fast with precision and real skill.

A lot’s been covered in this article, so let’s recap.

Firstly, an arpeggio is a pattern of notes that are based on the 1st, 3rd, 5th and 8th position of a scale. In the case of the major ones, this is simply 1, 3, 5 and 8, however, if it’s minor, the 3rd must be flattened by a semitone (or fret). These can then be embellished into major, minor or dominant 7th chords, by adding the 7th note of the scale into the pattern. If it’s major, it stays as it is, if it’s minor, it’s flattened along with the 3rd note, and if it’s dominant then it’s also flattened, but the 3rd remains as it is.

You can learn them in five main shapes, which are based on C, A, G, E and D chord shapes. These are moveable all across the fretboard and can each be turned into 7ths, minors, or to altered chords beyond what we’ve covered here. You can play them legato, using alternate picking or with sweeps and taps, but the most important thing to remember as you learn it any of these ways is to prioritize accuracy over speed. Even if speed is your ultimate aim.

Entering the world of arpeggios is a sure way to open up your fretboard and improve your playing. Whether it’s blues, jazz, metal or a combination of genres that you’re exploring, these shapes belong in your long-term memory.