The Pros and Cons of Scalloped Fretboards 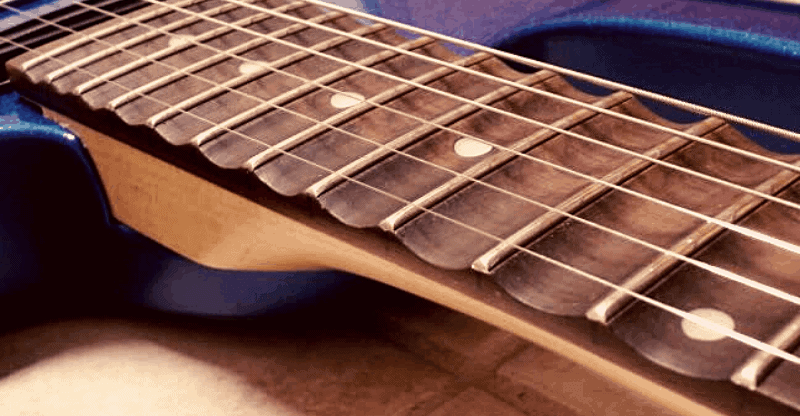 It’s possible that you’ve played guitar for years and never come across the term ‘scalloped fretboard’.

In fact, this type of fretboard has been used to great success by many of the world’s best guitarists such as Deep Purple’s Richie Blackmore, The Mahavishnu Orchestra’s John McLaughlin, Yngwie Malmsteen, Steve Vai, among many others.

As we’ll see in this article, this rare type of fingerboard has some big advantages, but also disadvantages.

What are Scalloped Fretboards?

First up, what are they?

A scalloped fretboard is a fretboard that has had the wood removed in between the fret wires to create extra-jumbo sized frets. The technique involves sanding down the wood on the fretboard to a ‘U’ shape rather than the typical flat (or slightly curved) shape.

The technique actually originated in the East centuries ago and is found on old stringed instruments (many lutes have scalloped fretboards, for example).

These days, it’s quite rare to find a scalloped fretboard on a guitar, especially not on production-line guitars, and you’ll probably need to find one secondhand or get one custom made by a luthier.

If you find a guitar with a scalloped neck for sale in a store, grab it, so long as you’ve done all the usual checks with buying a guitar.

Is the fretboard scalloped all the way up the fingerboard? No, most of the time only the last few frets (from the 12th fret and beyond) are. From fret 1 to fret 12, it’s normal.

Why Scallop a Fretboard?

Principally for two reasons: to help you play faster and to facilitate note-bending techniques.

The theory goes that by reducing the amount of contact between your fingers and the fretboard you only make contact with the string and this helps you play faster (because you don’t have the friction of the wood slowing you down).

As the wood is curved inwards, it will decrease the friction between your fingers and the strings too, which makes it easier to bend strings.

In fact, in many traditional Asian and Indian music, notes are bent by pushing straight down in the same way.

When you reach the top of the fret, pressing it some more will sharpen the note giving you some vibrato (you don’t need to bend the string to get vibrato).

Are you sold on the idea yet? If not, let’s go a little deeper into why you should play a scalloped neck guitar.

Because you only have to press string on to fret and not all the way to the wood, a scalloped fretboard makes it a lot easier on your fretting hand. The strings ‘glide’ along the top of the frets.

Your fingers don’t drag, and you have increased flexibility for positioning your fingers (resulting in a more relaxed posture). It basically requires less effort to play the guitar and speeds up your technique.

The scalloped fretboard makes bending and vibrato not only easier but also impacts the sound.

Another factor is the guitar is lighter, and as the wood has been removed as part of the sanding process, the resonance is altered.

While improving note separation is often seen as a benefit of more upmarket pickups, a scalloped fretboard also helps with note clarity too, especially when playing legato techniques such as hammer-ons and pull-offs.

It takes a bit of getting used to, as you need to learn how to apply a lighter touch than normal and be really deliberate with each note.

There are some downsides, however…

Beginners should beware, this is the preserve of experienced guitarists.

To play a scalloped fretboard you have to change your playing technique and develop an extra light touch. Press too hard, and you can accidentally sharpen a note, pressing the note out of tune.

Most guitarists haven’t been taught this way, so there’s a steep learning curve to get the hang of it. Chords are notoriously harder to play (even simple open chords).

However, there is a good compromise: a partially scalloped fretboard. The section from the 12th fret upwards, or even from the 15th (as with the Ibanez Jem), is scalloped, but frets 1 through 12 are left as normal.

This gives you the best of both worlds: the first 12 frets are normal, allowing you to play chords, etc, but higher up the fretboard you have it scalloped to give you extra agility and speed. This makes it significantly easier and doesn’t require you to learn the technique as much.

It’s worth considering how much you want to play this style, as once the procedure is done there’s no turning back.

In addition, there is a risk that during the process you file too much away, or heaven forbid, reach the truss rod. This is another reason why it’s better to leave it to the expert, to avoid damaging it permanently.

If you apply the procedure on something that already has value (a vintage guitar) then you better be alright with it losing a lot of its value, as scalloping will de-value a classic guitar.

Will a Scalloped Fingerboard Help Me Play Faster?

This is the million-dollar question!

Having a guitar with a scalloped guitar neck won’t in itself make you faster, but it will require you to focus on your technique and play more accurately and delicately which will, in turn, help you refine your technique and make you a play better (and faster) player.

The shorter distance your fretting hand needs to move to find the next note, as well as the reduced tension, will help too. Speed is also about ‘economy of motion’ remember.

So, are you ready to take your guitar into your local music shop and get the procedure ordered?

If so, make sure you’ve considered all the pros and cons we’ve listed in this article. While scalloping a guitar neck isn’t the key to playing faster, it will force you to concentrate on your technique more, which is always a good thing.

It should definitely get you closer to sounding like Yngwie Malmsteen, John McLaughlin, Ritchie Blackmore or Steve Vai, and that’s a noble pursuit right there!

Should you try scalloping your own guitar? No, this isn’t a job for the DIY enthusiast and isn’t as simple as sanding down an oak floor. You need an appreciation of the fretboard’s radius among other things. If you’re in any doubt, get an expert to do it.