String Trees Explained – What They Do and the Different Types Used 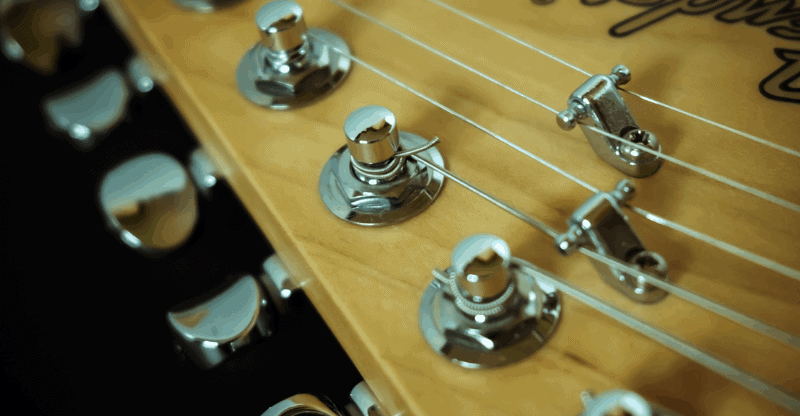 String trees aren’t the first thing you notice on a guitar. In fact, you may never have paid them much attention. However, these little widgets do in fact play a surprisingly important role in the setup of some guitars.

I say some because, as we’ll see, not every type of guitar has them. Whether or not a guitar or bass requires them is determined by how the headstock is constructed, which we’ll come onto a bit later.

So, as you’ve no doubt realized already, this article is about string trees. We cover what they are, what they do, why they’re required, and the different types that exist.

What are String Trees?

String trees (also known as string retainers or string tees) are small metal widgets that sit on top of the headstock of a guitar.

As I mentioned in the intro, you don’t see them on every type of guitar. You typically only see them on guitars with straight headstocks, such as Strats and Teles (or ‘Fender-style’ guitars) that have headstocks that run parallel to the fretboard.

They are not found on guitars with angled headstocks, like the Gibson Les Paul (or the multitude of Les Paul clones out there).

What do String Trees do?

Keep the Strings firmly in the Nut Slots

If you’ve ever experienced strings buzzing up near the headstock, it’s usually because the strings are too loose in the nut slots. As a result, they vibrate and make an annoying rattle or buzz due to insufficient pressure behind the nut.

To stop this happening, string trees are used. Their primary function is to produce the correct amount of downward pressure on strings so they don’t buzz.

They do this by creating a ‘break angle’ behind the nut, increasing the strings break angle as they pass on their way to the tuner posts.

If you look at the contour of a Strat, there’s a slight parallel drop from the fretboard to the tuning headstock, and often the drop is not enough to keep the strings firming in the nut. This causes the strings to pop out if the tension on them isn’t sufficient, especially on thinner strings.

Read any books on the history of Fender, and you’ll know Leo Fender knew he had a great design for mass production when he came up with the flat headstock (it was economical to produce, as it wasted very little wood during production).  The one thing it lacked (where the headstock was concerned, at least) was enough string break.

String trees were his innovative solution.

If an open string is loose in the nut slot, it won’t sound as clear or as loud as it should (a bit like if you didn’t fret a string properly).

With six-in-a-row inline tuners (the sort you find on the Fender Strat), the high strings (D, G, B, and high E) have a greater distance to travel from the nut to the tuning posts.

However, the low and E and A guitar strings don’t need much guidance because the distance traveled from the nut to the tuning posts is pretty short.

There are three types of string tree commonly found:

The simplest and possibly the most common type of string tree is the butterfly style. It even looks like a tree!

Then there is the barrel or roller style string tree.

The simplest type is the disc or round style.

As for build material, most are made from metal. However, guitarists who do a lot of bending or use excessive tremolo for cool whammy bar tricks prefer their string trees to be made from graphite rather than metal.

The ‘metal-on-metal’ of a string scraping against a string tree creates a lot of friction that can reduce the string’s ability to return to pitch (causing tuning problems). Graphite provides a slippy, smoother point of contact for the strings to rub up against, producing less friction and reducing the likelihood of the strings going out of tune.

Another solution is to use roller string trees (string trees with built-in rollers) that allow the strings to pass freely, which retaining the tension.

While string trees are probably not the top of your list when it comes to buying a guitar, these tiny guitar parts play an important role in its general health and sound by creating more force on the nut slot and thus reduce the chance of string-buzzing.