Guitar Anatomy Guide – Every Part of the Guitar Explained 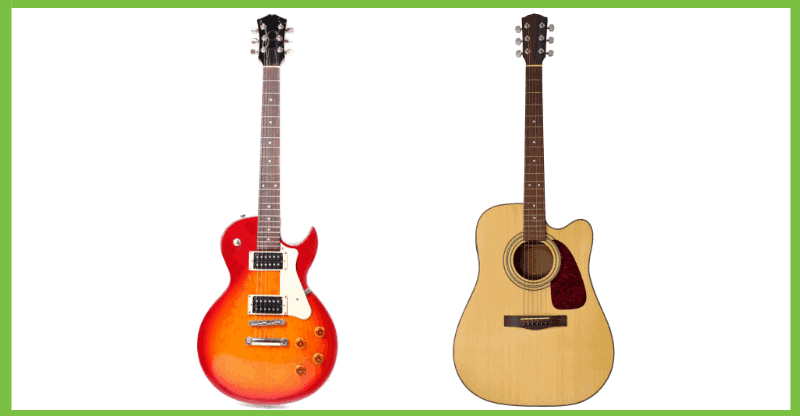 An essential skill for beginners is to understand what all the parts of the guitar are called.

Firstly. because it’s good to know your instrument.

Secondly, over the course of your playing career, you’re going to need to take your six-string to an expert to have it looked at.

If you understand the terminology we cover in this article, when he or she says ‘your truss rod needs adjusting’ you’ll know what they’re talking about.

In this article, we explain the terminology for both acoustic and electric guitar parts, and the parts common to both.

Parts of the Guitar

The type of wood used affects the sound significantly too, depending on the choice of tonewood and whether it’s solid body or laminate.

Spruce, for example, provides crisp high ends and lots of volume; while mahogany has a warmer, softer tone.

The headstock, as the name implies, is at the top of the instrument.

There are broadly three types of headstock (straight, angled, and scarf) that each have their own advantages and disadvantages. They all serve one crucial role: to support the tuning pegs.

Guitars with straight headstocks don’t have a natural break angle (like tilted headstocks) that keeps the strings firmly slotted in the nut. To overcome this, they use small metal devices called string trees.

You’ll also find angled headstocks have what is known as a ‘volute’ on the back of the neck between the headstock and the neck, to help reinforce the neck.

They are attached to and protrude from the headstock and are used to raise or lower the pitch of the strings (by tightening or loosening) and most importantly, keep the strings from slipping.

There are broadly six types of machine heads, but most modern guitars use sealed or locking tuners (which stop strings slipping so easily).

Their placement varies from guitar to guitar too. Some guitars have are a 3 and 3 combination (3 on the top, 3 on the bottom) such as the Les Paul, others have 6 in a line (like the Strat), and now and again you come across a guitar with a 4 and 2!

One word of caution: Decent tuners that don’t slip are essential if keeping your guitar in tune is a priority. Make sure you check this if buying a used guitar.

The nut is positioned at the end of the fingerboard and controls the spacing of the strings and their height above the fretboard (and the edge). They can be made from a variety of materials, such as bone, graphite, or brass.

The type of nut can also have a direct bearing on the guitar’s action, and ultimately it’s sound.

They sometimes require adjustment, and after a lot of use, should be replaced.

The area where the neck meets the body is called the ‘neck joint’ and there are several types available – the most common is the set neck found on most acoustics and some electrics such as the Les Paul, and the bolt-on beck found on the Telecaster and most other Fender guitars.

It’s a subject of debate how and where the neck should be measured. As the shape of the neck tapers the further up it you go, neck width measurement is generally taken at the nut.

The fretboard is a piece of wood glued to the flat side of the neck and are commonly made from hardwoods such as rosewood, maple, and ebony.

Less common are what are known as scalloped fretboards, which are said to help with faster playing and to facilitate note-bending techniques.

The open string notes repeat at the 12th fret (and again at the 24th fret they repeat again), so you only need to memorize the fretboard up to the 12th fret.

On the fretboard are thin metal strips, usually made from nickel silver alloy wire, running widthways across the face of it.

These metal strips go by the name of ‘fret-wires‘.

The space between these fret-wires is a fret. When we press a string down onto one of these frets (well, just above it), we alter the length of the string.

This alters the pitch at which the string vibrates and that’s how music is made.

The number of frets varies, but most guitars have between 19 and 24 frets. Steel-string acoustics typically have 20 frets, electrics slightly more between 22 and 24 frets – though there are plenty of exceptions to the rule.

Fret markers are the little dots on the face of a fretboard, and sometimes on the side of the neck.

These reference points help you navigate around the fretboard.

Fret numbering usually goes at fret 3, 5, 7, 9 and 12. Fret 12 often has two markers, to indicate that you have reached the octave of the open string. The position markers go all the way up the fretboard.

Often the fretboard will have inlays that also help to navigate the notes of the fretboard (there are broadly six types of inlays).

Some high-end vintage guitars use mother-of-pearl, but often a cheaper material called pearloid is used, especially on Gibson and Les Paul Copies.

The truss rod is a metal rod (or rods) that is embedded in a specially cut groove or slot on the inside of the neck.

There are a few types of truss rod out there, but its purpose is always the same – namely to strengthen and compensate the neck against the immense amount of force exerted on it by the strings. It does this by adjusting the curvature of the neck (called the ‘relief’) which is crucial for the playability of the guitar.

The rod is typically adjusted via a nut at the top or bottom of the neck, and special tools are used to tighten or loosen it (this tightening and loosening will alter the curvature of the neck).

The pickguard (or ‘scratchplate’) is a piece of material, often plastic – though there are many types of pickguard – that’s glued to the soundboard to protect the finish of your guitar from getting scratched as a result of strumming.

On many electrics, the scratchplate has a dual purpose and is used to cover the instrument’s electronics.

Towards the bottom of the guitar, you find the bridge. There are various types of bridge, but broadly speaking those found on acoustic guitars are made of wood, and those on electric guitars are metal.

On acoustics, the saddle is a 2” to 3” thin strip of material set within the bridge that comes into direct contact with your strings. It affects action, intonation, and even the tone of your acoustic guitar.

Electric guitar saddles are a bit different and are mostly integrated into the metal bridge. The strings sit in their own individual saddles, with dedicated (per string) height and length adjustment controls.

The small metal knob that you attach your guitar strap to (if you use one) has a few names: end pin, strap button, or attachment button.

We’ll now look at components found only on electrics.

A pickup is made up of magnetic poles wound in copper wire. It picks up the vibration from the strings ( a disturbance in the electromagnetic field known as ‘magnetic flux’).

This disturbance is converted to an electrical current through the copper wire, then sent to an amplifier.

There are many different types of pickups but the two most common are single-coils and humbuckers (see our comparison of single-coil vs humbucker for a more detailed comparison).

They each have their own string spacing (the distance between pole pieces).

The pickup’s location adds to the characteristics of the tone. You get a bridge and neck pickup (and on guitars like the Strat sometimes a middle pickup) and they each sound slightly different.

It’s worth adding that most pickups are positioned perpendicular to the strings, but in the case of many Fender guitars (including the Strat and Tele), the bridge pickup is angled to help balance out the tone.

The pickup switch (or ‘blade’ as it’s called on the Strat) lets you toggle from one pickup to the other, or a combination of all of them. It basically lets you choose which pickups to ‘switch on’ according to the tone you’re going after.

Volume and tone controls are connected to the pickups, and twisting them up or down will either increase or decrease the volume, or overall tonal color of your ax.

The tone controls can take your sound from bright and clear, to dark and muddy.

The control knobs are attached to pots (short for potentiometer) and are situated in the hollow cavity inside the guitar’s body. Pots are a type of variable resistor and used to control the resistance or flow of electricity in an electric guitar.

There are many types of guitar pot, the most popular being the 500K (commonly used with humbuckers) and 250K (mostly used with single-coil pickups).

The bridge supports the strings and transmits the vibrations of the strings to the pickups.

There are broadly two types of bridge:

The tailpiece is what the strings attach to. The bridge and tailpiece are mostly separate units, but in some cases (e.g. on the Telecaster) they are combined into one.

The whammy bar is a protruding bit of metal that’s attached to the bridge of some electric guitars (commonly found on Strats).

When pressed down, it lowers the pitch of the stings by reducing the tension and when rapidly pushed and released, it produces a vibrato effect.

Sometimes it’s referred to as a vibrato bar, or even a tremolo bar (Fender caused this confusion when they released the Strat by calling the whammy bar a ‘tremolo bar’ when in actual fact it’s a vibrato effect)

Since it’s birth in the ’50s, plenty of whammy bar techniques have emerged with some pretty comical names such as ‘the scoop and doop’ and ‘lizard down the throat’, used predominantly in heavy metal.

We’ll now look at the components found only on acoustics.

The soundboard or ‘top’ is the top piece of wood on an acoustic.

They play a critical role in determining the tone and the projection quality of an instrument.

When a string is plucked it causes the soundboard to reverberate across its surface. Different materials used for the soundboard produce different tones and volume.

The soundhole is the circular hole found on the soundboard. Its primary function is to help project sound.

Sound reverberates across the soundboard, into the guitar, before bouncing to the outside.

Bridge pins are six small, round balls found on the bridge that anchor the strings in place.

They may be one of the smaller components found on an acoustic guitar, but their importance cannot be understated.

Without pins to hold the string in place, an acoustic would be unplayable.

We hope you enjoyed our anatomy of a guitar article. We’re adding and improving it all the time as we discover new things to add, so be sure to check back from time to time.