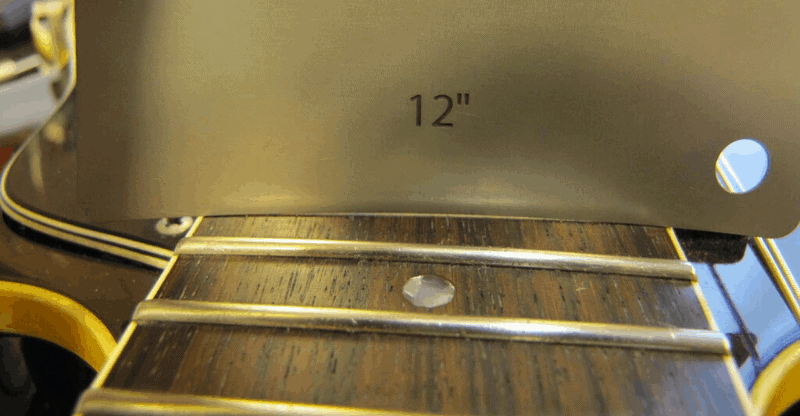 One of the lesser-known things about the guitar is what’s called ‘fretboard radius’.

Sometimes referred to as the fingerboard radius too, this is an essential part of the guitar’s construction. However, like everything to do with the guitar, there is no ‘one size fits all’ and the radius varies from manufacturer to manufacturer, as we’ll see.

But why bother learning about it?

Interestingly, the radius not only has an impact on how comfortable the guitar is to play, but it also has a direct impact on the style of music you play as some genres favor larger radiuses than others.

For that reason, it’s worth understanding a bit more about it as getting the right type can aid your playing style.

What is Fretboard Radius?

Put simply, the fretboard of the guitar can be broken down into two different parts:

The first is the neck itself, which relates to the backside of the guitar, i.e. what you wrap your hand around. There are various types of neck shape.

The second is what is often specified as the fingerboard, meaning the front of the neck, on which the strings and frets are actually located. It is the degree of curvature on this side of the neck that is the fretboard radius.

While the back of the neck is the more rounded side – allowing for players to properly grab the neck – the fingerboard (or front side) is flatter but still has a convex arc spanning from the first string to the sixth.

This arc may not be quite as exaggerated, but the more ergonomic shape helps accommodate the natural curve of the hand and arching of the fingers as players cover the frets to play chords.

How Do You Measure It?

As for the radius itself, in mathematics, the ‘radius’ is the distance from the center to the circumference (or edge) of a circle.

In this case, the fretboard is placed at the top of the circle and the arc from one edge to the other is the size of the radius. 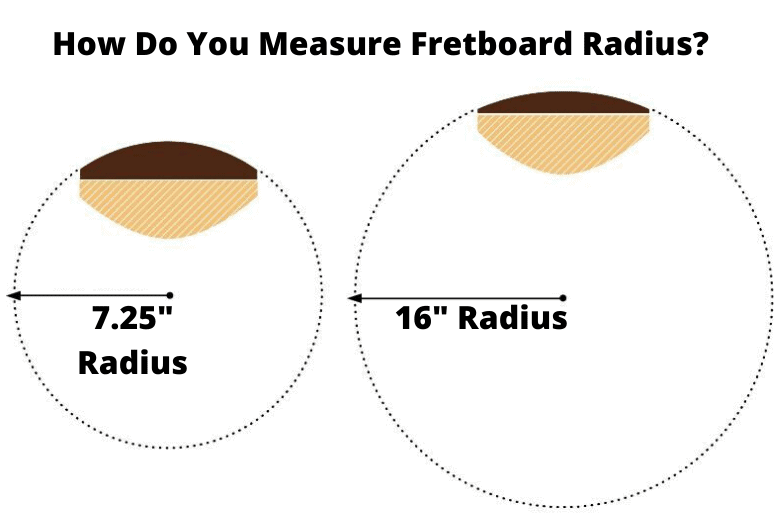 Typically measured in inches, the most popular fretboard radius used today is 9.5″ (or 241mm), with the next most common being 7.25″ – the most prevalent option prior to the 1980s.

There is also the even larger 12″ fretboard but, of course, you can also find guitars that go up in much smaller increments than these standardized sizes/widths, and try out more minor adjustments to see where your preference lies.

If you’re still not sure which yours is, here’s a good fretboard radius guide by make and model.

How Do You Choose Which is Best for You?

It isn’t a simple case of ‘bigger is better’ or vice versa: it all depends on your play style and what you’re looking to get out of your guitar.

Of course, your handspan and own natural dexterity are worth considering – though the latter can be improved by practicing.

The most common sizes you’ll find on the market are 9.5”, 7.25” and the 12”, but the key distinctions are usually broken down into two schools of thought:

A smaller radius and, therefore, more rounded fingerboard, tends to better suit the natural curve of your fingers.

The best example is the 7.25”, which was the most popular size across a number of brands for many years and is now the defining feature of Fender’s Vintage style collection.

This kind of specification is great for playing in lower neck positions, standard shapes, as well as a great range of barre chords.

One of the reasons why this size was so popular in the period between the 1950s and 80s was because it suited rhythm guitar, which was the predominant force in music before musicians started to refine more intricate styles.

On a very rounded radius, however, notes sometimes ‘choke out’ when you bend them because of the more pronounced ‘hump’ in the middle of the fretboard.

On the other hand, a flatter radius gives a more even playing surface, which is great for string bending and shifting vertically across the fingerboard with as much ease as possible, especially in higher positions on the neck.

Naturally, this makes the bigger radius popular among those playing lead guitar – a good example is the classic Gibson Les Paul, which comes with a 12” fretboard as standard and is played by the likes of Jimmy Page, Slash, and early Eric Clapton, among others.

If you play a scalloped fretboard, differences in neck radius have less of an impact.

Another option beyond guitars that offer traditional fretboard radiuses, is investing in a compound radius neck, which has become an increasingly popular choice among modern players.

In short, with a compound neck, instead of having one consistent guitar fretboard radius along the length of the neck, the width of the fretboard decreases the further along it goes. 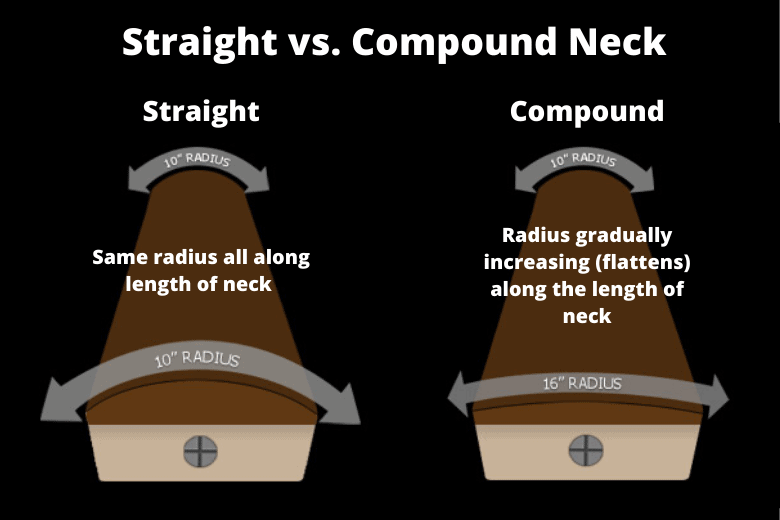 With this marriage, not only do you get a smaller, more rounded shape nearer to the headstock – once again, suitable for making shapes as that is where more common chords are played – but the fingerboard gets much wider and flatter as it meets the body of the guitar, allowing for more flexibility to change your play style.

Here’s a good guide to compound radiuses if you want to learn more.

One last thing to keep in mind is longevity: finding the right radius for you will not only determine your level of comfort but, in turn, how long you can continue playing for in individual sessions.

The 9.5″ is such a popular choice because it balances the best of both worlds, without being too big or too little for players of varying handspans. That’s why short scale guitars usually have a 9.5″ radius.

In fact, Fender remains the biggest guitar manufacturer in the world and despite their extensive line-up, around two-thirds of their all-electric guitars are now produced to this specification.

To draw things to a close, a fretboard radius is something that many people overlook, but could prove to be a hugely important part of your learning process.

Not only will finding out what the best fretboard radius is for you increase the rate at which you’ll be able to memorize shapes, or improve your string bending, it’ll help you play better for longer.