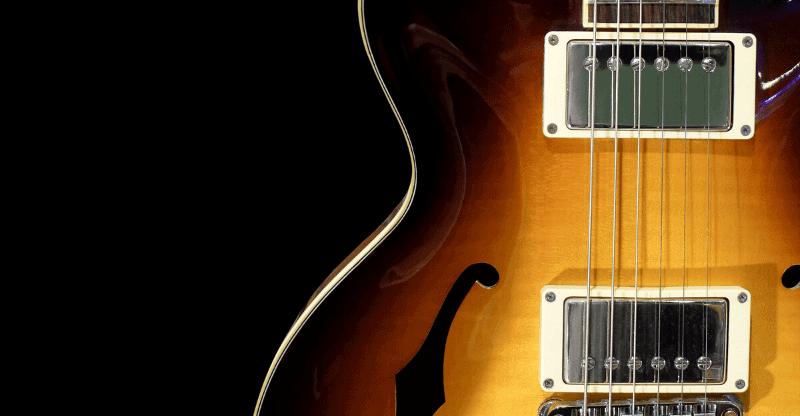 Pickups allow your electric guitar (or acoustic if you choose to amplify it) to be heard, and play an important role in shaping your tone. Depending on which you use you’ll get a different sound.

In this article, you’ll learn about the different types used on the majority of guitars, and which ones are best used for different styles of music.

What is a Guitar Pickup?

Pickups literally ‘pick up’ the vibrations from the strings and turn them into soundwaves. They’re essentially magnets with copper wiring wrapped around.

When the strings on your guitar vibrate, the magnets are disturbed, which converts the nearby wire into a ‘signal’. The same signal then travels out the guitar, via any effects pedals you have, and finishes the journey at the guitar amp.

They have their own unique tonal characteristics depending on where they’re located (neck vs bridge position) and whether they are straight or angled.

These use a simple magnet to transform the vibration of your strings into an electromagnetic signal –  including, at times, some unwanted hum (they are subject to a 60-cycle hum, which can produce some undesirable noise).

That hasn’t stopped the worlds most famous guitar (the Fender Strat) using them to great aplomb, among many others. Despite the hum, part of their attraction is the bright, twangy tone produced.

Genres such as country and surf have used them to great effect (the distinctive twang of the single-coil adding to the music) but they have been used to great effect in many other genres too (e.g. blues, folk). Typically the single-coil doesn’t take too well to lots of distortion, so you’ll find players of hard rock and metal steering clear of them.

It was frustration with the unwanted interference of the single-coil that led to the invention of the humbucker (hence the name, they ‘buck’ the hum).

Instead of using just one magnet, the construction of the humbucker consists of two magnets which are wired slightly out of phase with each other (they are, in effect, two single coils together). This cancels out the hum and leads to a warmer sound in the process.

Their warm tone has proved popular with the jazz crowd, as well as the metal and hard rock players as they work very well with high distortion due to their higher output.

The debate about single coil vs humbuckers and which is better will never end!

Related: Our review of the best humbucker pickups

The third type is the P90, a sort of hybrid between the two above; higher output than the single-coil with more depth, but not as high or as deep as the humbucker. The P90 is popular in blues and soft rock circles (but not hard rock).

Related: Our review of the best P90 pickups

Electric bass pickups work the same as guitar ones, but fall into different categories. Let’s take a look:

With a warm and clear tonality, J-Bass pickups are commonly used in jazz and were first introduced on Fender’s Jazz Bass.

Soap bars are the same as above (J-Bass) but with wider housing that’s sealed: soap bars are also more versatile (the pins that protrude from the bottom allow you to try different wiring combinations.)

Popular with players of punk and rock, the split-coil – as the name suggests – comprises of two halves of a single-coil pickup with one of them slightly further up the neck than the other. They give off a punchy tone.

Less common than the two above, the dual-coil is actually a humbucking pickup (two coils together) which produces a similar vibe (warm): as a result they work great for a vintage sound.

Note: Amplifying an acoustic guitar is generally a trickier affair as most people want to reproduce the sound of the original instrument. As a result, it’s easier to get hung up on getting the sound as near to the real deal as possible. However, nothing will ever reproduce the tone exactly the same.

For acoustic, we have four main types:

Next closest in terms of reproducing the genuine acoustic tone is the transducer. It sits underneath your instruments soundboard and ‘listens’, translating the sound into an electric signal. Not as accurate as an in-body microphone, but better at dealing with feedback.

The piezo is actually a type of transducer, but rather than sitting under your soundboard, it goes under your saddle where the strings pass over. It listens to the strings rather than the soundboard, and as result produces a more synthetic sound. Whereas the transducer can be overly sensitive, the piezo is better with feedback, but still prone to what’s referred to as ‘piezo quack’.

If you want to avoid feedback entirely, a soundhole one is the way to go, as these are essentially the same as what’s used on electric guitars. The sound it produces is distinctive and can lack some of the nuances you get with the two above.

Other Stuff Worth Knowing About

All the above are either ‘active’ or ‘passive’ pickups, and it’s important to know the difference.

Passive pickups don’t boost the signal. In other words, they have passive circuitry.

This means they use simple transducers which work by many coils of wire wrapping around a magnet. The location of the magnet causes the strings to magnetize, too, so that when they vibrate, an electrical current passes through the metal wire.

The passive variety doesn’t require batteries and is the type you find on Les Pauls (including most Copies), Stratocasters, and Telecasters, among many others.

The active type, on the other hand, does boost the signal – as such, it requires a power source for the active circuitry (usually a 9V battery).

As it boosts the signal, it kicks out a high output – for this reason, the active variety is popular in genres such as metal and hard rock that requires more gain before feeding back (especially for articulate phrases that need more clarity in their delivery). Its lack of noisiness brings clarity that also provides a ‘sterilized’ feel.

Another important factor that affects the output of a pickup is the magnets used.

A material called ‘alnico’ is often used, which is a mix of aluminum, nickel, and cobalt. It was especially common in the 50s and 60s, offering a classic soft and warm tone.

Ceramic pickups gained popularity in the 1970s, and often have a high output. This gives them clarity and produces a stronger sound – they’re cheaper than alnicos and offer a tight, loud growl.

The layout of magnet also has a bearing on the sound, in particular whether it has individual magnetic poles (which produce a thin, bright sound), steel poles extending from an electromagnetic bar (which produce a fatter, darker sound) or the blade style, which replaces the individual pole pieces with a single bar made of metal.

Potting is when pickups are sealed in wax to get rid of any air gaps in the coil or on the cover. These air gaps can create microphonic feedback, which presents itself as a loud, screeching sound when you’re playing at high volumes.

The wax used is a mixture of beeswax and paraffin, which is heated to a high temperature so that it is runny enough to fill all of the gaps where air might get.

If yours don’t come readily potted, you can get them done by a professional, or even pot them yourself with the right amount of care and guidance.

How pickups are wired makes a difference in the quality of your sound. Parallel wiring is when each pickup is wired up to the inputs and outputs together, in parallel. This means the signal reaches the guitar’s output via the fastest route possible, resulting in a clean, twangy and transparent tone.

Sometimes, they’re wired in a ‘series.’ This is when they’re connected together, before reaching the output. It produces a very high output, which means that you can let out a much higher signal before running into any feedback problems. The downside to series wiring is that you often lose a lot of the higher-end frequencies.

Locations (Where You Fit Them)

Your guitar will have space for either two or three pickups. Each of these has a different purpose, suited to its position.

Those close to the bridge will encounter a low amount of string vibration before being activated. This creates a bright sound, which is naturally quite quiet due to its positioning. The pickups designed to be fitted close to the bridge usually have a high output, to make up for the quiet location of the guitar.

Pickups designed to go near the neck have a lower output, as the strings vibrate more near the neck, thus giving out a louder natural sound. The tone near the neck will also be deeper, making it well suited to chunky rhythm playing.

We hope that’s given you a decent introduction.

If you’re looking to purchase a set, before you dive in and buy some, consider what sound you’re going for.

Do you like a heavy, precise tone with a consistent dynamic, or are you more interested in getting a vintage twang? If your heart’s set on heaviness, a set of active high output ones will do the trick, however, if you’re looking for some responsive ones then old school, passive single-coils are the only way to go.

Another consideration is wood tone. What kind of wood is your guitar made from? Mahogany and rosewood have a dark tone, so hunt out pickups to complement. Maple, ash, and alder have a brighter sound, so they might be best suited to pickups that hold on to the high-end frequencies. Your volume knob affects your tone, too. 250K pots are warm, whereas 500K pots are bright.

Finally, check that it’s physically possible to fit them. Many are designed for particular types, such as Strats, Teles or Les Pauls. Others are more versatile, offering compatibility with multiple models.