Guitar Fret Wire Sizes – All You Need to Know, Including Terminology & Charts 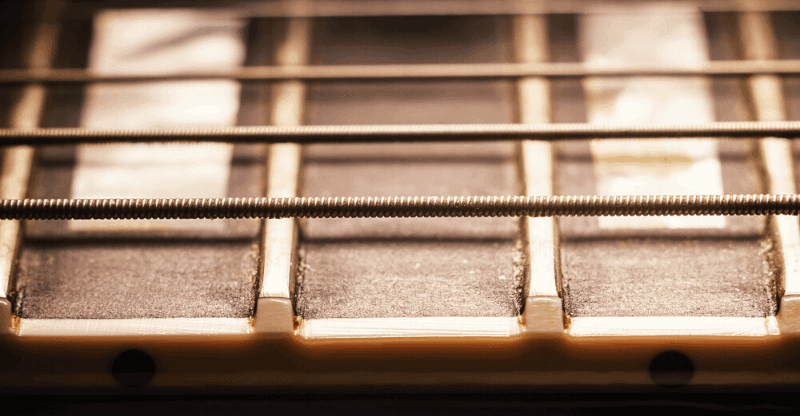 While searching for your ideal guitar, you’ll notice people using phrases like ‘jumbo frets’ or ‘medium jumbo frets’, which will probably leave you thinking ‘why does that even matter?’

Fret wires are, in fact, a surprisingly important part of a guitar that can affect its playability and even some aspects of your technique.

In this article, we’re going to explain a bit about what they are, how they’re made, and the different types available, so you don’t come across as a complete idiot next time you’re in your local music shop.

What are Fret Wires and How are They Made?

Frets are the metal strips that run at regular intervals along the fingerboard and the number of frets varies from guitar to guitar. Acoustic guitars have fewer frets (typically around 20 frets on steel-string acoustics) to around 22 to 24 on electric guitars.

They’re usually made from nickel/silver alloy wire, sometimes called ‘German Silver’, though there is no silver in there at all. The fret consisting of a round crown or ‘bead’ linked to a barbed ‘tang’ to secure it into the fretboard. The crown covers the entire width of the pre-set fret slot and slightly overhangs the fingerboard.

Frets have to be cut into precise fragments that match the guitar’s neck width. Then they are inserted into engraved areas in the guitar’s fingerboard. With some extra glue and the tang’s barbs, the fret wire is then set into place.

Many people think that frets are the gaps in between (most likely due to confusing tab notation), but this actually isn’t the case. In actual fact, when guitarists talk about different fret sizes, they’re actually referring to the length and width of the crown only, not the tang. 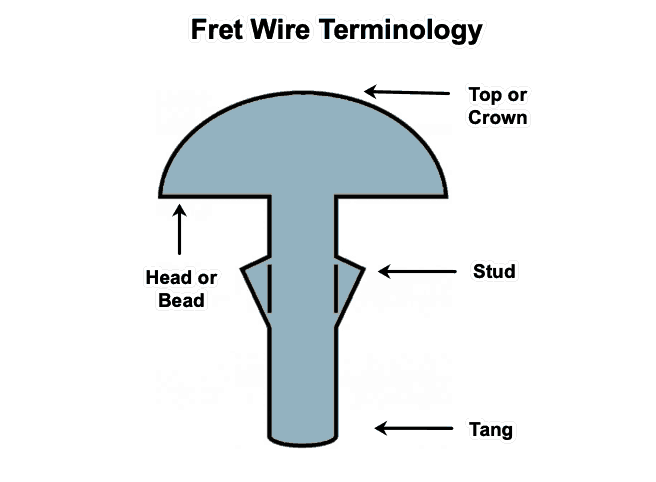 Does Fretwire Size Have any Real Effect on Intonation?

No, not really, it’s more about playability.

The taller the fret, the easier it is to get clear notes as less finger pressure is needed (you don’t need to press your finger to the wood to get a clear note). Taller frets have a longer shelf life too – as you don’t have to press so hard, they don’t wear out as quickly.

Dunlop is one of the biggest fret wire manufacturers, making five different fret sizes. So, let’s take a look at the various crown heights and widths below.

This is the smallest fret wire out there, most commonly used on vintage guitars pre-dating the ‘60s. In particular, old school Fenders tend to have 6230 fret wires built in to support the rounded radius of the fretboard. These days, modern guitars tend to have thicker varieties in place, so 6230s are a bit of a rare find.

6105 fret wires are a sort of modern take of the smaller 6230, being thin but slightly taller. This design is the most popular choice thanks to their playability and grip against the fingerboard. If you’re a beginner, 6105 fret wires are a great place to start and it will be easy to find a guitar with them built-in. Next time you’re down your local shop, try asking the person there ‘are these 6105 fret wires?’ and watch their face!

This size fret wire is more commonly known as ‘vintage jumbo’ and is the least sought after of all. In particular, 6150s are a lot wider but shorter than the original 6230s. Vintage jumbo fret wires are pretty much the opposite version of the popular 6105 design, being short and wide rather than tall and thin. Most guitarists find these a little clumsy and awkward to play.

6130s are better known as ‘medium jumbo’ fret wires. This size is often used by Gibson on their more modern guitars. If you pick up a Fender Telecaster then play a Gibson SG, you’ll notice a big difference in fret size and playability. For this reason, even if you’re going for a replica Gibson, it’s best to try out the guitar first to make sure your fingers are comfortable handling the fretboard. Medium jumbo frets provide good sustain and often make it easier to bend the strings.

These fellas are the thickest of all frets out there and are as tall as 6105’, so you can see why they get the name ‘Jumbo’. Their large size might not suit every guitarist, however, the legendary Rory Gallagher is known to have used them, so they definitely work for some folks. In terms of playability, Jumbo Frets make bending much easier and produce a warm tone. The downside is people with smaller hands can find them a little uncomfortable.

Here’s an original Dunlop fret wire chart I found in this excellent guide:

There’s no perfect choice when it comes to picking a fret size, but it can change the instrument’s playability slightly.

Whereas, jumbo or medium-jumbo frets feel smoother, provide extra sustain, and can let you bend without exerting as much force. The downside is, your fingers might feel a bit weird not actually touching the fretboard.