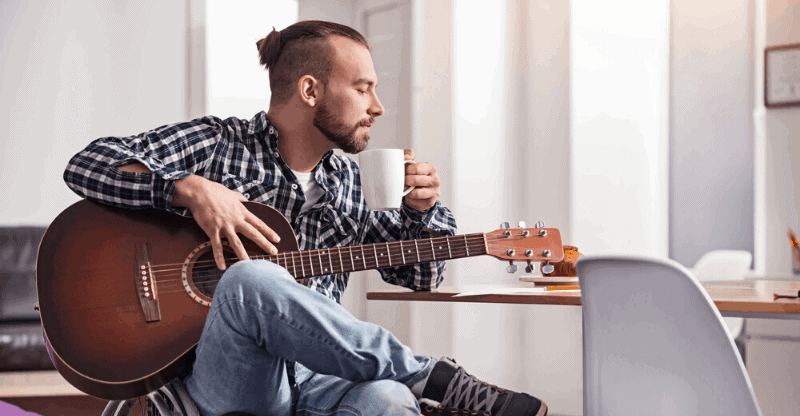 Want to know the secret to every great guitar practice routine? You need to strike the right balance of technique, theory, and repertoire.

Because here’s the thing: what you think is practice might not actually be helping your playing. You might be focusing on the wrong thing.

In this article, we’re going to fix that and show you how to get the right mix in your sessions.

Starting with some exercises, categorized into beginner, intermediate and advanced, we’ll then finish with an example workout at the end.

Technique is the area guitarists practice most, as it includes cool things such as solos, playing licks, etc.

Learn the basic downstroke strumming technique, then how to add an upstroke, and finally down and upstroke patterns.

Picking using a plectrum is an important technique that has a surprising impact on how you sound. There are numerous picking techniques worth learning about, which each lend themselves to different playing styles.

Even if you desire to be a fingerstyle guitarist, its essential to learn first how to use a pick. Start by making sure you’re holding the pick correctly. Then focus on picking in 4/4 time along to a metronome.

Try the trickier techniques such as economy or sweep picking.

Learning to fingerpick even if you mainly using a pick is a fruitful endeavor.

The first thing to do is try playing through all songs you already know, but rather than use a pick, use your fingers. Experiment with simple fingerpicking techniques to begin with.

Once you’re proficient at a simple fingerstyle technique, try some alternative methods.

Now try hybrid picking and other sophisticated fingerpicking styles. Listen to players of the style such as Nick Drake who incorporate alternating bass and melody lines simultaneously.

Mastering the fretboard (i.e., where notes are) is a lifelong pursuit. But one thing is clear, the better grasp you have of it, the better player you will be.

At a minimum, you should know the notes of the bottom E and A string. Study the basic intervals.

Memorize the intervals on all six strings and all, plus the octave shapes.

Study all possible major and minor triad combinations, including inversions and open-string combinations.

Expand your chord vocabulary beyond open chords; play augmented chords such as 7th and 9th chords.

Play every chord in at least three ways (from the E, A, and D string root)

Take every chord you know, and work out the inversion for it up and down the neck, then practice chord progressions you know with the new inverted chords.

While its quite common to learn songs, familiarising yourself with chord progressions is just as useful (if not more so). A chord progression is a common sequence of chords that work well together from a harmonic point of view and are prevalent in pop, rock, and jazz music.

Memorize the simple three-chord pattern of I, iV and V and be able to play it in all keys in all positions. As a stretch goal, try a 12 bar blues arrangement (which is based on this pattern).

Now, play four and five-chord patterns such as the one made famous by Pachelbel (I – V – vi – iii – IV).

Invert the chords found in the patterns, and play them in all keys.

Practicing scales is one of the areas of music theory that many players avoid. It’s crucial to learn scales as they’re the foundation to soloing and playing lead guitar. They also help to solidify your knowledge of the notes of the fretboard, which is another essential thing you need to know.

For beginners, focus on the pentatonic scale. When you understand this five-note scale, you’ll be able to play a half decent solo. Start with the minor pentatonic scale in A, and work out all five positions on the fretboard. Don’t be lazy and settle with one pattern (that’s what most amateur guitarists do). Fully map out a single key and commit to memorizing all five standard pentatonic patterns. Then do the same with all other keys.

Once you have the pentatonic nailed (see above), learn the following three scales: the blues scale, the natural minor scale, the major scale. Play each in all five positions of the fretboard and all keys, and try playing them without moving position on the fretboard (using what’s called ‘narrow modulation zones’).

So long as you’ve got the major scale adequately embedded in your brain, you won’t have any issues with modes as they are derived from the major scale. There are seven mode patterns to master that will help to liven up your soloing. Try playing each scale and mode in non-traditional ways like triplet and stutter styles, and try targeting notes to bring out major and minor from within a single set of notes.

Arpeggios are an excellent way to liven up your playing, as can be seen in Gypsy Jazz where they’re used to great effect.

Take the major and minor triad chords and learn the arpeggios for them. Play them in all positions on the neck.

Absorb extended arpeggios such (e.g., 7th’s, 9th’s, etc.) and practice connecting them across the fretboard.

Play them horizontally up and down the neck (in the style of Django Reinhardt).

Learning new songs is helpful as it forces you to play a new chord progression and widens your repertoire in the process.

Take a simple song, commit the chord shapes to memory, and practice transitioning between them. Make sure you play the correct strumming pattern too, and focus on maintaining a steady rhythm using a metronome or drum track.

Study the rhythmic and melodic elements of the song. Search for live performances of the song and see how they’re played and the chords that are used. If a particular performance of the song resonates with you, pay special attention to what it was that you liked.

Play the song in different positions of the fretboard [link] and transpose the song into different keys. If you want to get experimental, try playing the song with a different rhythm (e.g., take a pop song and apply a reggae rhythm to it)

Play Over a Backing Track

Second only to playing with others (which is ‘the ultimate’), playing along to a backing track is an awesome technique.

Take a key your most familiar with, and find a backing track in the same key. Start by jamming over with just the pentatonic scale.

At an advanced level, you should not only be referencing the changes as you play but also creating a unique overall melody for the song.

Soloing Over a Track

Learning scales and music theory is great and all, but nothing beats playing a solo that you love.

Search for the tab of a guitar solo you want to play, and learn the first few bars of it. Don’t try nailing the whole thing in one go. Instead, just assimilate a bit at a time.

As well as working on the solo (see above), pay attention to what the rhythm section is doing and how it relates to the solo.

Play the solo in different positions on the neck. Then transpose it into different keys and do the same.

Not enough is said about developing your musical ear. A good technique is trying to sing the notes that you play.

Start with simple tunes like Mary Had a Little Lamb. Try to work it out on using one string.

Try a more complicated melody and see if you can play it without having to look up the tab.

Transpose the melody into different keys. You could also try it with alternate tuning such as DADGAG.

Here’s a 60-minute practice schedule. This 1-hour workout is an example that incorporates the three focus areas above, but you’ll need to change it according to your skill level.

Before you start, kick off with a few warm-up exercises. Doing so avoids injury and gives you a higher level of control over your fingers, preparing you for more efficient and effective practicing.

Take a scale you know, for example, the pentatonic minor and play it in all 5 positions. Focus on keeping a consistent alternate picking technique and observe if you’re holding the picking correctly. Using a metronome, start at a slow speed (e.g., 40 bpm) and gradually increase it but only when you’re playing each note perfectly.

If reading TABs of single notes can slow you down, reading the TABs of chords can be even slower.  Up to 6 numbers on top of each other can be how your chord is conveyed in TAB. Most chord diagrams are a little quicker, but they still involve a level of interpretation. However, reading the letter ‘D’ is pretty easy to take in, and if you know the chord shape by heart, you’ll be able to respond in an instant. No matter what level you’re at on the guitar, you’re always going to come across unfamiliar chords. Part of your practice session should be spent making the strange familiar.

Slow but consistent chord strumming patterns and changes are just as important as slow but consistent lead passages. Again, you can use a metronome to gradually build your speed when necessary. Bear in mind that it’s far more of an impressive and important skill to be able to play in time with a metronome, whatever the speed than it is to be able to play something quickly.

With any backing track or song that you love, this exercise, which combines aural training with improvisation, is a wonderful way to approach the end of any practice session. Preferably blind as to what key the piece is in, put on a piece of music. Any piece of music will do, though we’d recommend something rock/pop-based as there are unlikely to be any or many key changes. As the music is playing, find one note which goes well with it. Play it, play with it, have fun, until you feel ready to progress.  When you’re ready, add another note and play with both of them. You can have fun playing and experimenting with just two notes throughout a piece, but your confidence and curiosity both will likely grow, and you’ll want to add more. Hit a note that doesn’t sound right with the song? Don’t worry, don’t play it again. Try another 🙂

So, you know how important warming up is, now it’s time to think about cooling down. This can also help to relieve muscle tension and to protect you from potential injury. Stretching your fingers, and playing some slow scales to take yourself back to ‘normal’ after a guitar practice session will be beneficial to your playing and your body. If your fingertips are sore, bear with it. Once you have built guitar calluses, they’ll stop hurting.

Practicing at the same time each day helps to build a habit, or if you can’t make it a daily occurrence, then the same day each week

Even if you schedule 15 minutes a day, that can still be highly effective. There is evidence to show that regularly practicing, for small amounts of time is more effective than long, infrequent bursts. How much time you have at your disposal will vary greatly, but even 10 minutes is better than nothing, and you’ll still improve.

And remember not to cram. Even if you have a whole day to spare, packing all your practice into one session isn’t the optimal way to learn. Little and often is far better for developing muscle memory, dexterity, and speed.

Setting short and long term goals is another helpful thing to do. Be specific about what things you want to achieve in what timescale. Results will come when you plan for them.

Finally, remember the most important thing is to make practice time fun. Every so often change the order of what you do. It’s worth it in the long run.