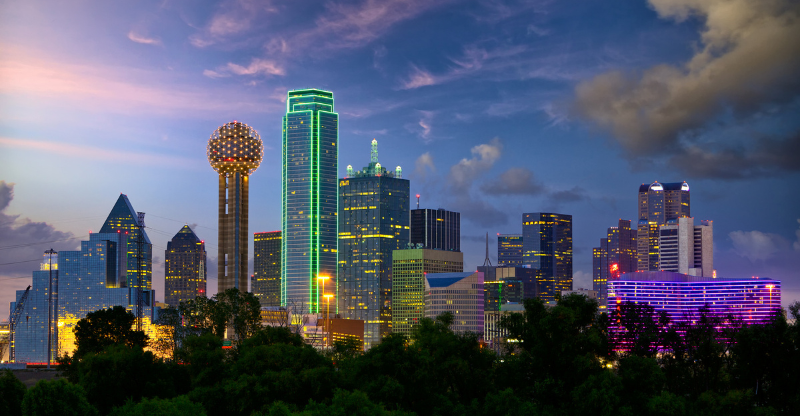 Heavy on classic country and interspersed with folksy Dylan tracks and outlier rock singles, this story-filled playlist features songs about Dallas, one of the Lonestar State’s most popular cities. From love stories and lessons on heartbreak to wild late night tales, artists like Chris LeDoux and Ray Wylie Hubbard relate to listeners stories that once again prove, everything’s bigger in Texas.

“Oh, how I wish Dallas was in Tennessee.” In classic country fashion, Alan Jackson’s tune ‘Dallas’ weaves together a love story between the protagonist and his girlfriend named “Dallas” who is leaving his Tennessee hills and heading back to the Lonestar State. The clever lines, co-written by Alan Jackson and Keith Stegall, find the love-stricken main character wishing Dallas (both the lover and city) were located in Tennessee.

A dark country song, this haunting tale plays out much like a hard-boiled crime novel. Ray Wylie Hubbard’s gravelly vocals pair well with the image-driven track, which features two characters trying to rob a liquor establishment. When things go wrong, the protagonist finds himself asking how his life got so turned around. The answer to the question is in the hook of the chorus: “Dallas after midnight.”

“…he’s a single man with a double life.” This country song by the legendary Chris LeDoux features a cowboy riding two different horses. By day, he’s a businessman in the steel industry. By night, he’s a rodeo man in the bull industry. His “Dallas” days are filled with business deals over the phone, and his “Fort Worth Nights” are spent drinking longnecks and charming cowgirls.

Though Dylan wrote ‘Murder Most Foul’ long after the tragedy occurred, the song delving into the assassination of President John F. Kennedy is at the core of this exploratory track. Written sometime around 2013, the folk singer didn’t release it until 2020, when he unveiled his Rough and Rowdy Ways album. The assassination cut through the heart of America and had a lasting impact on Dylan, who contemplates the “soul of America” within the lyrics.

A moody track that focuses on a down-and-out character trying to skip town, Steely Dan released ‘Dallas’ as a single before their iconic album Can’t Buy a Thrill even debuted. Featuring vocals by drummer Jim Hodder, the band has tried to distance themselves from the track over the years, feeling it’s not up to the quality of their other releases. Fans have long felt differently, releasing bootleg copies of the track due to listener demand.

A chance encounter with Nashville songwriters Randy Rogers and Wade Bowen turned into Parker McCollum writing one of his fan’s favorite tracks, ‘Dallas.’ A longtime setlist staple, the country singer decided to add the tune to his Gold Chain Cowboy album due to countless requests by supporters. Featuring guest vocals by Danielle Bradbery, the song centers around a complicated Texas romance and a heartbroken lover.

An early ’90s country track, the bouncing song is complete with a soaring horn section and Carlene Carter’s yodel-tinged vocals, giving it a country vibe from the days of singing cowboys like Gene Autry. Set against good-time instrumentation, the lyrics center around a cowgirl’s one last hoorah before she heads out of Dallas for greener pastures.

If You’re Ever Down in Dallas – Lee Ann Womack

“I know so well how it hurts to lose at love.” Singer Lee Ann Womack, who first became a national sensation with her country hit ‘I Hope You Dance,’ keeps that same theme of vulnerable wisdom with lesser-known track ‘If You’re Ever Down in Dallas.’ Her gently delivered relatable vocals sing to a past lover who she regrets leaving. She tells him if he ever makes the same mistake, call her up, because she can take him “all the places a fool goes to forget.”

After a slew of comparisons to popular TV drama series like Dallas, Hank Williams Jr. decided to include this tongue-in-cheek track on his album Five-O to set the record straight. Making direct references to soap operas, including Dynasty, he reminds listeners his life is not scripted and is nothing like the spectacles that play out on the shows.

Since the early 2000s, rapper Big Tuck has been a pioneering force for the Dallas hip-hop scene. He’s penned songs that have gone on to stand as enduring anthems for both listeners and fellow musicians of the bustling Texas city. With ‘Welcome to Dallas,’ Big Tuck takes a hard-core approach to showing what his streets of Dallas are all about, and relentlessly raps about showing respect to both his city and his rap game.

“You’ll only sing the blues down in Dallas.” Coastal crooner Jimmy Buffett sings about leaving Dallas behind in search for friendlier places with this off-the-beaten-path Buffett tune. Lyrics like “The promo man won’t let us be” clue listeners in to his reasons behind the disdain he feels. With hints about the cut-throat nature of the music scene, he declares, “I’m leaving this town as soon as I can.”

A honkytonk toe-tapper of a song, Junior Brown’s riveting single ‘Broke Down South of Dallas’ sounded like it was brought to the present day via a time machine when it was first released in ’93. A truly traditional country track electrified enough to give it that clean, California country sound pioneered by greats like Dwight Yoakam, this story features a protagonist with a broken down vehicle worried his wife is going to think his lack of punctuality is due to a wandering eye.

“Dallas is a rich man with a death wish in his eye.” One of the city’s most beloved underground tunes, ‘Dallas’ is a slightly-gothic song full of rich metaphors that highlight the duality of the town. The poignant description which plays out in the song is told from a protagonist’s perspective while flying over the city in an airplane. Despite his distance from the city below, he seems to have a personal history with Dallas, and has experienced her wrath before.

This parading, singer-songwriter track celebrates the free-loving nature of Texas women from Dallas to La Grange. In the ’70s, Willis Alan Ramsey was one of the state’s budding performers. Though he never became a household name (while the honkytonk craze gained ground, his music was best experienced in intimate listening rooms due to lyrical prowess), he had some mainstream success when Captain and Tennille covered his single ‘Muskrat Love.’

While The Flatlanders’ track ‘Dallas’ is told from the nitty gritty perspective of a local who seems to have firsthand experience with the town, country outlaw Willie Nelson’s ‘Dallas’ paints a more innocent picture. With plenty of local references (songwriters Stovall and Groom even managed to sneak in a Lyndon B. Johnson highway lyric), the short tune plays like a love note as the protagonist waits to catch a plane to his beloved Dallas, Texas.