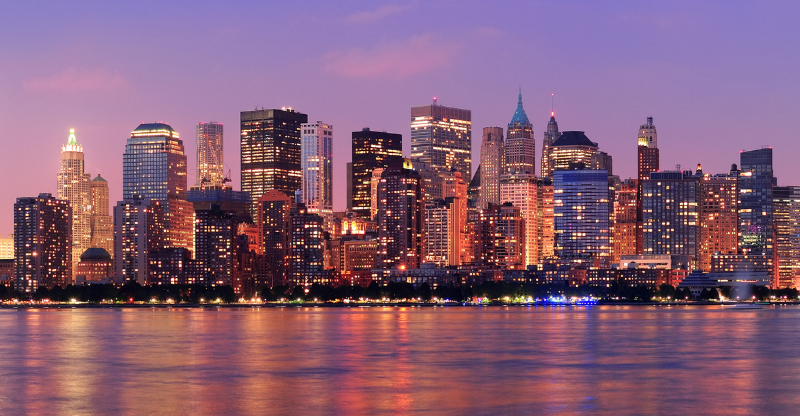 New York City: a place where dreams either come true or get shattered into bits—it depends on who you ask! Some people have a romanticized vision of the city, while others know how hard it is to get by, especially if you’re down on your luck. This playlist of songs about New York has every opinion of NYC. You’ll see that it varies quite a bit!

This song is probably semi-autobiographical since Bob Dylan moved to New York City to try to secure a record deal. He went from gig to gig until he signed on with Columbia records. This song opens with the same lyrics as ‘Down on Penny’s Farm’ by The Bently Boys and is heavily inspired by that song.

No list of New York City songs is complete without this one! Although this song is considered one of Frank Sinatra’s signature songs, Liza Minelli was the first to perform it in the 1977 film New York, New York. Sinatra released this song on his 1980 album, and since then, most people have associated it with him.

‘Empire State of Mind’ is an ode to New York City written by Angela Hunte and Janet Sewell-Ulepic. The two native New Yorkers were homesick in London and knew they wanted to write a song about it. Jay-Z and Alicia Keys released the song in 2009, and it charted at number 1 in the US and number 2 in the UK.

New York, I Love You but You’re Bringing Me Down – LCD Soundsystem

You can love your city but still point out its flaws, and that’s what the singer is doing in this song. His concern for everything wrong with New York City comes from a place of love. He wants what’s best for the city and can’t stand to see all the bad things. LCD Soundsystem released this song with their 2007 album Sound of Silver.

Billy Joel missed New York while he lived in California, and he started writing this song on a Greyhound bus (which he mentions in the song) on his way back home to New York. It only took him an hour to finish the song on the piano once he got settled at home, and it eventually became one of his most well-known songs, even though it wasn’t released as a single.

Fairytale of New York – The Pogues with Kirsty MacColl

Christmas songs are often overly joyful and focus only on the good things. The Pogues wanted to shed some light on how not everybody gets the magical Christmas they sing about! The song is about Irish immigrants who went to New York City for a better life but were met with difficult times and homelessness. It charted at number 2 in the UK upon release and was voted the best Christmas song in the UK in 2004.

The Only Living Boy in New York – Simon & Garfunkel

Art Garfunkel went to Mexico for a few months to be in a film, leaving Paul Simon behind in New York. Simon wrote this song about Garfunkel, and it was released in 1970 on their final album together. You can see in the lyrics that Simon felt sad about the duo fading out, but he still wanted Garfunkel to be happy with his life.

Related: Travel to more songs with cities in the title.

This song was on Taylor Swift’s 1989 album and marked a new musical era, so it only makes sense that the album would start with this song! Swift sings of how people go to the Big Apple to start over or fulfill dreams, which is what she did herself. The song charted at 39 in the UK and 48 in the US.

‘Autumn in New York’ is what’s known as a jazz standard—a piece that most jazz musicians know and perform frequently. (There isn’t an official list, and it changes with time.) This dreamy song makes you want to stroll in the cool air of October as Ella and Louis sing of all the good things that happen during autumn.

Nas’s ‘N.Y. State of Mind’ isn’t necessarily good since he raps about how difficult life is in New York City. He talks about how he never gets to sleep because it isn’t safe and how everyone struggles to afford their New York City life. While many people romanticize the city, Nas provides a darker and more honest view of struggling to get by.

This song is a love song to New York City. Lead singer Michael Stipe said the song shows his feelings that he thought the city was changing for the better after the September 11 tragedy. The song was released in 2004 and charted at number 5 in the UK and number 1 on the US Alternative chart.

Related: Check out this playlist of goodbye songs.

This song might make you feel happy-go-lucky as you listen to Joni Mitchell sing of lovely mornings living in Chelsea. She had the idea for the song when she made a mobile out of glass shards and hung it up in her apartment in Chelsea. The song didn’t get much attention until Judy Collins covered it and her version made it to the charts.

The Strokes wrote this song in response to police brutality that occurred in 1999 in New York City. The song charted at number 16 in the UK, but it didn’t chart in the US since it was left off the album due to the September 11 tragedy. Since this song criticizes the New York City cops, the song was considered inappropriate. Lead singer Julian Casablancas said that removing that song caused many people not to understand the political messages throughout the album.

Walk on the Wild Side – Lou Reed

This song is about drag queens trying to convince men to ‘Walk on the Wild Side’ with them. Each verse is about a different drag queen named after real drag queens associated with Andy Warhol. The song was released in 1972 and charted at number 10 in the UK and 16 in the US.

Sting sings of everything that makes him stick out as an Englishman, from his tea to his accent. Although he’s singing about being English in America, the song has a secondary meaning. He wrote the song about the author Quentin Crisp, who was typically treated as an outcast because he was gay. Sting encourages everyone to live their lives however they want even if they’re criticized because nothing is more important than being yourself.

Angel of Harlem – U2

‘Angel of Harlem’ references Billie Holiday, who started singing jazz as young as 13. She had a difficult life, especially during childhood, but she became one of the most well-known American jazz singers. U2 wrote this song as a tribute to Holiday and to jazz music they heard as they toured the US.

The location in this song is a real place in New York City that was once a hot spot for gay bars and people looking for a partner for the night. This song was released in 1976, and 53rd and 3rd kept its reputation until the mid-1990s when the police started arresting people for their activities, causing many bars to close.

This is a fun and quick song about how New Yorkers love to gossip. It doesn’t matter if it’s people, places, or events—it’s going to be talked about! The narrator seems pretty annoyed with the constant gossip since he describes it as rattling as he listens on the phone.

Take the “A” Train – Ella Fitzgerald

This song is best known as an instrumental song performed by Duke Ellington’s orchestra. There were meant to be lyrics since the beginning, but it had already gotten airtime on the radio as just an instrumental. Ella Fitzgerald covered the song and released it in 1957, and it quickly became the most popular version with lyrics.

Leonard Cohen wrote this song about a famous woman he met and spent the night with at the Chelsea Hotel. He stayed at that hotel often when he was in New York City. Cohen once specifically mentioned who the song was about, but once she passed away, he said he regretted that her name was associated with the song since the lyrics are upfront about their intimate night together.

Related: Find this song on our playlist of moving on songs.

Lana Del Rey sings about her relationship with her older boyfriend while also making fun of the hipsters in Brooklyn by mentioning beat poetry and hydroponics. Lana Del Rey was supposed to sing with Lou Reed, but he passed away on the day of their meeting.

Back to Manhattan – Norah Jones

After breaking up with her boyfriend, Norah Jones wrote this song (and most of The Fall album). She sings of how Brooklyn held all their memories together, but she could move to Manhattan and pretend like that chapter of her life never even happened.

The singer claims to feel safe in New York City, but whether or not that’s sarcasm or genuine is up for debate. Most of the song is about finding pretty girls to spend the night with, and at the end, he says that he’d feel safe in a cage. After September 11, 2001, this song wasn’t played on the radio as much.

This song was written for the 1969 film Midnight Cowboy but wasn’t included in the film. The song sounds like a positive song about New York City, but it’s actually about misplaced optimism—the narrator assumes God is in the city, but that’s not the case! The song charted at number 34 in the US and even higher in Canada and New Zealand.

The lyrics in this song are meant to be a little fuzzy, so this song is certainly open to interpretation, and many people find their own meaning as they listen to it. A common understanding of the song is that it’s about how many artists aren’t fully appreciated.

Living for the City – Stevie Wonder

Stevie Wonder tells the story of a boy who lived a tough life in Mississippi, but he was surrounded by people who loved him. He wanted to get away to a better life in New York City, but when he finally made it, he was tricked into making an illegal deal and spent ten years in prison. The song is a social commentary about many people working long hours to get by, and it’s still not enough.

Related: Clap along with these fun clapping songs.

Boogie Down Productions sets MC Shan straight in ‘South Bronx.’ MC Shan claimed that Queens was the birthplace of hip-hop, but make no mistake: it was the Bronx. This song functions as a history lesson and a warning that you may never see Queens again if you say Queens is the birthplace while you’re in the Bronx!

Bruce Springsteen shows you a glimpse into a few different New Yorker’s lives. There’s a fish lady, a jazz man, a junk man, and Billy has a Cadillac. You don’t get too many details about these people’s lives, so the song is like observing people from the streets of New York.

The narrator in this song is a broken heart after his lover left him, and he’s searching high and low throughout New York to find a way to get rid of the ‘Harlem Blues.’ Harlem is his home, but it just doesn’t feel right without his lover. He turns to flappers and alcohol, but it isn’t the same.