33 Best Songs for Zumba to Get Your Blood Pumping 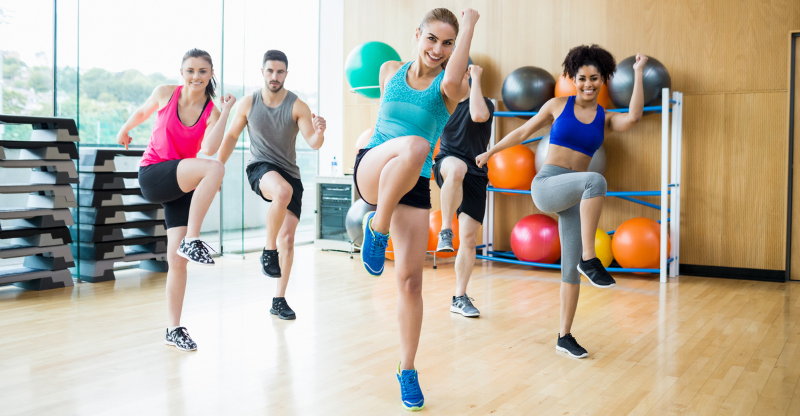 Zumba routines offer participants a great mix of fitness and fun with a dose of musical enjoyment. Numerous music tracks fit the mood of a Zumba Fitness session, mostly from the reggaetón, pop, and Latin pop genres.

Here are some of the best songs for Zumba routines of all difficulty levels and types.

This collaborative piece features T-Pain, Sean Paul, and Ludacris. The lyrics are more or less about dancing with someone you find attractive. The song also features some Spanish lyrics and is a great fit for building energy at Zumba.

Shakira and Freshlyground teamed up for this song, the official song for the 2010 FIFA World Cup. The track is a tribute to Africa and a motivational song, making it a great fit for Zumba fitness routines.

Related: This song features on our playlist of wake up songs.

Daddy Yankee tells the woman he is interested in that she is attractive in this track. The Spanish title roughly translates to “hot” in English. The Spanish track was so popular that it charted in over a dozen countries. A 2018 remix featured Bad Bunny, Becky G, and Natti Natasha.

A guy tells a woman he likes to dance and party with her in this Spanish language track. The song mentions Zumba and seems to have been written specifically for Zumba Fitness routines, so you can’t go wrong with using it for exercise.

Related: Continue your routine with these popular workout songs.

This track celebrates life and dancing with someone you find attractive. It specifically finds its narrator dancing the rumba at a Latin party. Puerto Rico is also named in the lyrics.

This song was developed out of a silly filler song called ‘Itty Bitty Bubble’ that Selena would sing at times to fill space between songs at concerts. After the song was released, Selena said it was about the sound a woman’s heart makes when a man walks by.

Worth It – Fifth Harmony

Priscilla Renea wrote this track that finds the members of Fifth Harmony telling a guy that they are worth his attention. Kid Ink features on the bridge while all the group members take their own verse. Kid Ink tells the woman he loves to resist her shyness in her verse.

This Ricky Martin track is entirely in Spanish and features Yotuel. It seems to talk about passion in terms of sweet foods and mentions spending time at the shore. It has a great dance-worthy sound, perfect for Zumba exercises.

Related: Still hungry? Here are some songs about food playlist.

Robin Thicke features on this track, which uses a vibraslap for a unique rattling sound. It seems to be about letting loose at a club or party with someone the protagonist finds attractive.

Meghan Trainor tells her future husband her requirements for how a guy needs to treat her if he is going to marry her. She was inspired by disappointing boyfriends in high school while writing the track. She warns this future man: “You gotta know how to treat me like a lady.” The song has an energetic 1950s sound that makes it great for Zumba dancing.

While Michael Jackson and Paul Anka first wrote this track in 1983, it wasn’t released until 2014 on Jackson’s posthumous album Xscape. It was also leaked a few years before, in 2006. The song tells of having one of the best love relationships possible, as the title suggests, and is uplifting.

Yandel’s ‘Moviendo Caderas’ features Daddy Yankee and encourages listeners who may feel discouraged or sad. Yandel tells them to go out dancing and forget about their worries. The song is entirely in Spanish and has the perfect sound for Zumba.

This dance song has gotten the remix treatment to fit into several different dance genres, making it the perfect Zumba song. Regina sings about going to Ibiza because she wants to relax and thinks this is the right place to do so.

Here’s a dance-fueled reggaetón track sung in Spanish. It seems to find Daddy Yankee warning male listeners about a heartbreaking woman who plays games with men. She makes them feel great and then lets them down—and not in a gentle way. Ozuna is featured in the song, as well.

This song’s narrator seems hopeful that a better life awaits in Acapulco. The Spanish song lists everything that there is to enjoy there. The last line is in English and might reveal the protagonist’s deepest desire when finding a new life: “I wanna fall in love.”

This song is interesting because it has lyrics in Spanish, English, and French. It presents Zumba dancing and the musical style that goes with it to listeners. It could be a great song to introduce people to Zumba exercise routines.

Bruno Mars is featured on this Mark Ronson hit, which finds Mars bragging about himself in a lighthearted way. The song includes women and empowers them in the lyrics, which is unique for funk songs. ‘Uptown Funk’ became the first track with the word “funk” in the title to top the charts in the United States.

Related: Dance all night with these party anthems.

The title of this Spanish language hit means ‘Rhythmic Dancing’ when translated to English. Enrique Iglesias is completely overcome by his attraction to a woman in the song. ‘Bailando’ broke the record for staying at number one the longest on the Billboard Hot Latin Songs chart. It’s a well-known track perfect for any Zumba routine.

Related: Take a trip with these Florida songs.

Ed Sheeran is falling passionately head over heels for a woman who gives him the shivers in this upbeat track. The song is about Sheeran’s wife, Cherry Seaborn, who he married after the couple dated for four years. The song was unique for Sheeran in that it took him three days to write, as he usually pens tracks much quicker than that.

Related: This song is on our list of wedding reception songs.

Here’s a Spanish language track that finds Shakira and Carlos Vives reminiscing as two people remembering their childhood bike rides together. The music video supports this theme, showing the two Colombian artists riding bikes and scenes from their Caribbean hometown, including highlights of local landmarks. This was the first collaboration between the two celebrated artists after they considered working together for some time.

Related: Feeling nostalgic? Here are the best songs about looking back.

This Spanish tune’s title translates to ‘Smoothly’ in English. The lyrics find Elvis Crespo singing as a narrator, asking someone to give him sweet kisses again. These kisses are wonderful for him and help him forget everyday life as if he were in a dream.

Related: Smooch to the tune of these songs with kiss in the lyrics.

Ariana Grande hoped to help people understand her reasoning for making music in this track—namely, to help people feel less alone and to impact the world in a positive way. She asks listeners to focus on her music’s greater purpose in the lyrics. Jamie Foxx features in the song’s chorus.

This was originally a Portuguese track, but many of the lyrics were rewritten in Spanish for its release and it became an international hit. An English version called ‘Danza Kuduro (Throw Your Hands Up)’ was also released. This version was sung by Qwote, Pitbull, and Lucenzo and quickly became a UK club hit. The lyrics are about letting the music take you over and forgetting about your cares as you dance.

Related: Batter up! Here is some good walk up songs for baseball.

This song’s title means ‘Tempting Me’ in English. It has a very fun and cool tropical sound that makes it perfect for dancing, whether in a Zumba routine or elsewhere.

Britney Spears’ ‘Ooh La La’ is included on the Smurfs 2 movie soundtrack and plays during the film’s end credits. Spears agreed to provide a track for the film as she and her kids were both big Smurfs fans. The lyrics are just about having a good and happy feeling that makes you giddy.

Related: Got a crush? Here are the best songs about liking someone.

This minimalistic song finds Shakira battling with her romantic partner—whose lyrics are sung by Maluma—and highlights the two’s differences as a woman and a man. The song was a huge success in various Spanish-speaking countries, likely due largely in part to the popularity of Shakira and Maluma. The song was included in Shakira’s 2020 Super Bowl performance.

This track name-drops various locations, including the Caribbean and Miami, Florida. The Spanish language lyrics seem to find its narrator thanking various locations for the inspiration that they have provided. The salsa version is a great choice for Zumba routines.

Javiielo and Nekxum seem to be singing about a breakup in this Spanish piece. The narrator can’t forget about the lost partner even though their relationship is over. This is a great dance-fueled piece for Zumba.

Related: This song is on our list of popular songs everyone knows.

This collaborative piece celebrates passion and fits into a variety of dance music genres. Snoop Dogg is called out in the lyrics of this track, which is a great choice for any Zumba fitness routine.

The protagonist of this piece sees a sad woman that he has feelings for. She dances alone when she goes out and doesn’t care about the things she used to. He wants her to dance with him so she can find the happiness she seems to have lost, possibly from a heartbreak.

Related: Need sad music to dance to? Here are some popular sad songs.

Sean Paul tells a woman that he is interested in and that she is very attractive to him in this track. He says he will be there for her if she does the same for him. Paul said the song is meant to get people in a happy, dancing mood.

This Zumba remix of the Vanilla Ice classic is designed specifically for Zumba Fitness. The song is mainly about having a good time at a party and samples Queen’s ‘Under Pressure.’ The lyrics are based on real events and were said to be written in 30 minutes by Vanilla Ice.

Related: Hear the original song on our list of funny sing along songs.