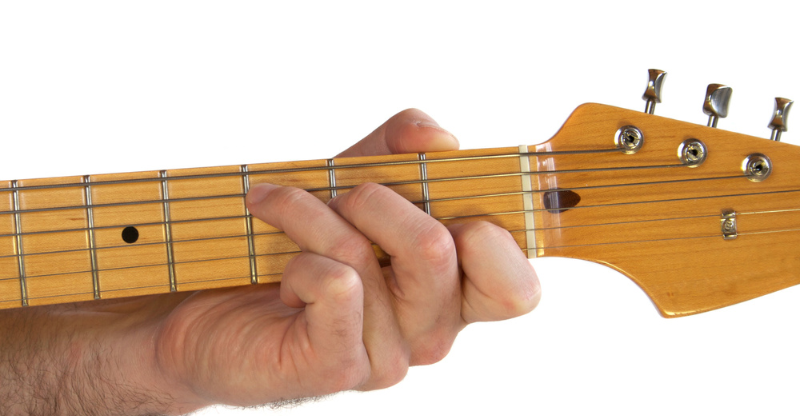 Did you know that C Major is one of the most common keys in music? It is one of the simpler keys, as its notes contain no sharps or flats. Many famous songs have been written and performed in this key and probably will be for years to come. So kick back and enjoy these songs in C Major.

Paul McCartney was inspired to write this song after his deceased mother came to “visit” him in a dream. She provided him with the “words of wisdom” that the iconic song references. The song appears on The Beatles’ final studio album of the same name, representing the group cutting ties and letting go of their past.

Related: Here are some good songs to sing if you need something easy.

While Fleetwood Mac has always been popular in the United States, this was their only number one hit in the country. The lyrics reflect the romantic challenges and heartbreaks that all of the band members were facing at the time it was written—everyone was facing a breakup.

Related: Check out our playlist of dream songs.

This popular and intricate song features a variety of religious imagery to tell a story of a love relationship that has gone south. In particular, famous women of the Bible are mentioned throughout the lyrics. Leonard Cohen’s original version was popular in various countries after its release, but Jeff Buckley’s cover popularized it in the United States.

Related: Here is some more music with figurative language.

Bill Withers sounds like he’s singing about missing a romantic partner, but he has said the meaning is a bit broader. The song is about missing something—a habit or perhaps a love like the lyrics seem to allude to—that one misses even though it might not be healthy. This was Withers’ first hit song.

Related: Brighten up your day with these sunny songs.

Here’s a song based on the Protestant hymn ‘Oh Happy Day, That Fixed My Choice’ from 1755. This was the first true gospel song to hit the pop charts. The song encourages listeners to have a happy day, particularly through the love and worship of Jesus.

Related: Put some pep in your step with these upbeat songs.

This is a smooth song about being enchanted by one’s dance partner. Dean Martin asks this enchanting woman to keep dancing with him. The original version was called ‘Quien Sera,’ written by Pablo Beltran Ruiz in 1953; Norman Gimbel wrote the English lyrics. Numerous popular artists have covered the song over the years, including The Pussycat Dolls for the Shall We Dance? soundtrack album.

Bernie Taupin wrote the words for this song, as he often did with Elton John’s tracks. When creating the lyrics, Taupin was inspired by his first trip to the United States. The song likely alludes to Taupin’s first wife and then-girlfriend, Maxine Feibelman; it is dedicated to her under its credits.

Related: This song features on our list of all time greatest songs.

Don’t Look Back in Anger – Oasis

This track encourages listeners not to look back at past romances with anger. Even if there was heartbreak involved, seeing the good in memories can help one heal and forgive the former partner. However, the protagonist has difficulty letting go and releasing that anger, as he can’t forgive his ex.

Bob Dylan said this song was written in as little as ten minutes. While he has said that the track is not really a protest song, the lyrics—which focus on hardship and freedom—influenced Sam Cooke and inspired him to write more political, protest-focused music.

Related: You’ll be blown away with these songs with wind in the title.

California Dreamin’ – The Mamas & The Papas

As the lyrics suggest, this song is about wanting to escape to a better place. Michelle Phillips’ yearning for the warmth of California after struggling with New York weather and homesickness inspired the lyrics. The track’s flute solo is unique to the genre and helps it stand out among other songs from the time.

This track is so popular in Australia that it is considered the country’s unofficial anthem. A nuclear disarmament protest march inspired the lyrics about using your voice and power to make the changes you want to see in the world.

Related: Be brave with these courageous songs.

Michael Jackson’s famous ‘Thriller’ and its accompanying music video tell a scary story of a frightening night filled with horrific elements. It appears on the album of the same name and uses zombie imagery to symbolize the fear in the collective American conscious.

Related: Enjoy some spooky songs on our list of the best Halloween music.

This song was written based on the concept of imagining a better world that John Lennon’s wife Yoko Ono came up with. The song imagines a world of pure peace that doesn’t involve ownership, countries, or other concepts that sometimes lead to disagreement or war. Lennon said he regretted not giving Ono credit for the song; he is the lone songwriter credited with creating the track.

Related: Unite with others with these songs about community.

Red Hot Chili Peppers laments the “Californication” of society in this track—the fake and empty qualities that society has taken on. The song makes several pop culture references throughout its lyrics. A 30-minute song by The Cure was a large inspiration for this song. That track, ‘Carnage Visors,’ was written to be a movie score.

Miss You – The Rolling Stones

This track is about the pain of longing, whether from a lost romance or another special circumstance in life. The song’s disco sound was unusual for The Rolling Stones and wasn’t celebrated by all of the band’s fans; it did become a chart-topping hit, though, and the band thought of it more as an R&B song than a disco track.

Related: Hear this song on our playlist of songs about missing someone.

This song doesn’t refer to a lost religion in a faith sense, but rather in a relationship sense—the protagonist doesn’t believe in the person he thought he had unrequited feelings for. The track explores the pain, suffering, and stress that unrequited feelings can create for the person who feels them with no hope for a resolution.

Related: Sing along with these good songs for karaoke.

‘Stairway to Heaven’ is considered by many to be among the greatest rock songs of all time and is also considered to be the most famous one. While most of the song is designed to be abstract, the beginning finds a female protagonist realizing that money will not help her get into heaven or bring her true happiness.

No Woman, No Cry – Bob Marley

Bob Marley sings of the pains, struggles, and memories of growing up with his mother in Jamaica’s Trench Town housing project. The title refers to Marley telling his mother not to cry. Marley gave writing credit to a friend who helped him in a time of need.

Related: This song is on our crying music playlist.

House of the Rising Sun – The Animals

The melody of this piece comes from a classic English tune, but it found popularity as an African-American folk track. It possibly speaks about one of two gritty locations in New Orleans and the women involved, with the title referring to such a place.

The title of this song came from an issue of TV Guide that Cyndi Lauper read; it’s the name of a science fiction film. This is a simple track about a woman who misses her romantic partner; they seem to have broken up. She wants him to know that she will be waiting for him and is still there for him if she needs him, “time after time.”

Related: Time is ticking—listen to our playlist of music about time.

Use Somebody – Kings of Leon

This song is about wishing you had someone to be close to while traveling away from home. It highlights the challenges and loneliness that arise while traveling on the road—struggles that many touring musicians and others who live and work on the go can understand quite well.

Bright Eyes sings of the dark, despairing, unsettling, and torturous feelings that are at play when one suffers from and fights mental illness in ‘Something Vague.’ The song shows the imagery, setting, and feelings firsthand in such a situation and lets the listener in on this perspective.

While many listeners have argued over the true meaning of this piece, it seems to find Beck singing about a love relationship that isn’t going well. Whether it’s about unequal give-and-take, one partner with mental illness, a painful and emotional breakup, or something else entirely is still up for interpretation.

This was a rare track written by Queen’s bass player, John Deacon, who has since stopped touring with the band. The track was written about life with Deacon’s wife; he has always had a quiet home life compared to other band members. Freddie Mercury refused to play an electric keyboard, so Deacon learned to play one and wrote this song on it.

Related: Show your bestie some appreciation with these songs for your best friend.

Another Brick in the Wall – Pink Floyd

Pink Floyd views traditional education through a critical lens here. Roger Waters based the lyrics on his own childhood school experiences at the Cambridgeshire School for Boys, where he felt that the teachers were more dedicated to rules and control than they were to teach.

This is a Pretty Woman-esque track where the protagonist wants his girlfriend to find a more respectable job. The name “Roxanne” was used due to its historical significance dating back to the times of Alexander The Great. Despite the song’s somewhat controversial subject matter, this ended up being The Police’s first major release and first hit song.

Related: Here are the best songs about women.

Massive Attack’s three-person production team and vocalist Shara Nelson present a song about a woman who yearns for her lover. However, she fears love because she has been hurt in past relationships. The song’s layering, samples, orchestral sections, and string arrangements were innovative for electronic dance music at its release in 1991.

The melodica instrumentation in this track lends it its name, which nods to Western film star Clint Eastwood. The song also uses the theme from the film The Good, The Bad, and the Ugly throughout. The lyrics seem to be about feeling free and in a decent mood, if not wildly happy with life.