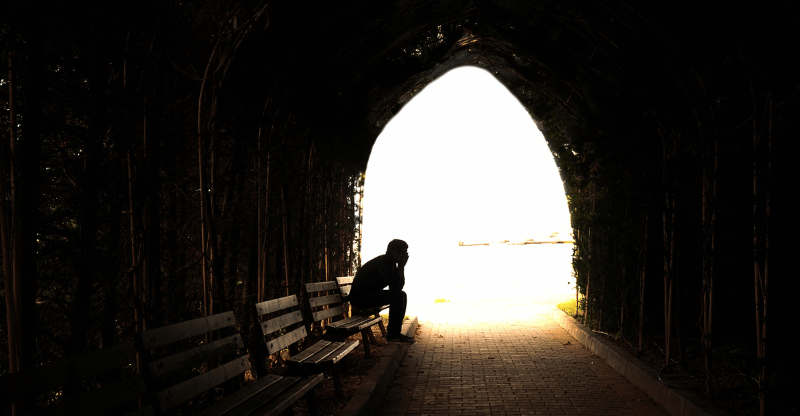 Rap music is known for its energetic beats and playful rhymes, but as you’re about to see, many rap songs cover heavy topics.

The tracks on this list of sad rap songs deal with dark thoughts, death, and mental health, offering a thought-provoking and emotional experience.

Mac Miller wrote this song in memory of one of his friends who passed, addressing the friend throughout the song. Miller reflects on all the things they experienced together, from the naivety of their youth to the darkness of growing up. The slow beat and crashing snare gives lots of space to the poignant lyrics.

This song is about one of those days where absolutely nothing goes right. From stressful situations to being stood up on a date, the narrator of this track can’t catch a break. The repetitive but catchy melodies mirror that feeling of being stuck in a loop of bad luck. He asks everyone: “pray for me I’m havin’ problems, problems, problems.”

Dance with the Devil – Immortal Technique

‘Dance With The Devil’ is nearly ten minutes long, but the narrative is captivating the entire time. The track tells a profoundly dark story about gangs, morality, and adversity. The subject of the song is working to earn credibility among his crew, but his limits are tested when they force him to brutalize a woman who turns out to be his mother. The sinister themes of the song feel like a warning to avoid dancing with the devil at all costs.

There are a few different ways to interpret this family-oriented track. Eminem says, “when I’m gone, just carry on, don’t mourn.” He seems to be talking to his daughter, promising her that he’ll be with her through memories and his music forever. But, he also could be talking to his fanbase, telling them not to mourn him when he has to prioritize his family and leave the music scene.

With the opening line, “when I die…I wanna go to hell,” it’s immediately clear that this song is going to cover some of Notorious B.I.G.’s darkest thoughts. He gets vulnerable in this song, talking about how doesn’t feel like he’s a good person that even deserves to be alive. Ending the song with a gunshot sound effect and unanswered cries of “ayo, Big!” is a chilling way to close.

Sometimes, life just feels so heavy. When you’re drowning under the weight of adversity, it makes you say “this can’t be life, this can’t be love.” Things shouldn’t feel so hard all the time, right? Jay-Z expresses this sentiment by getting real about things he’s faced in his life, and how it makes him question if his life is worth living.

Kendrick Lamar opens this song with anguished yelling and the line “loving you is complicated” repeatedly. He speaks each line with a slightly different cadence, heightening the tension before bringing us into the verse. Lamar raps about all the blame and shame he feels over this person- but the “you” actually turns out to be himself.

Nas sings to his mother in this grief-stricken song. His mother died of breast cancer, and Nas laments over her untimely and undeserved end. He wishes he could just have a little more time with her, saying, “if I could only have one more dance with you, momma” then he might be able to find some semblance of peace.

All That I Got Is You – Ghostface Killah

This song opens with dialogue that reveals a thirteen-year-old boy has been sentenced to prison for three months. This is semi-autobiographical, as Ghostface Killah also went to prison as a teen. The rest of the song is an ode to his family, who somehow stuck together despite so many things in their lives going wrong.

Jocelyn Flores’ was a friend of X’s, and committed suicide after a long battle with depression. X reflects on his own depression in this song, seeing her fate as one that could have easily been his own. It’s a song that isn’t afraid to get dark, and the vulnerability required to make a track like this is admirable.

With the tagline “I’m slippin’, I’m fallin’, I can’t get up,” it’s clear DMX is struggling. He’s in one of those ruts of life that feel impossible to crawl out of. Despite this bleak outlook, parts of the song are inspiring, featuring DMX’s determination to turn things around. He swears he will start treating the people in his life right, including himself.

This song, and a lot of other tracks on the 4 Your Eyez Only album, is from the perspective of J. Cole’s deceased friend. This track is for that friend’s daughter, telling the story of her father in a way meant only for her eyes. He wants her to know that he was more than most people thought of him, singing “daddy had dreams once, my eyes had a gleam once.”

The Book of Soul – Ab-Soul

This raw and vulnerable song tells Ab-Soul’s origin story. He speaks about having Steven-Johnson syndrome, the loss of his girlfriend, and his intense fear that he would eventually lose everything important to him. The simple piano progression and the warbling backing tracks spotlight the emotional vocals of ‘The Book of Soul.’

Abortion is often a taboo topic in music, but Flipsyde doesn’t shy away from how it has affected him. When his girlfriend found out she was pregnant, they decided she should have an abortion in order to preserve the life they had together. It’s always hard to tell if a decision like that is the right one, and it seems Flipsyde has some regrets, singing “happy birthday, I love you whoever you would have been.”

Chance the Rapper gets introspective on this stripped-back track, talking about his past, his family, and his identity. The opening line, “kicked off my shoes, tripped acid in the rain,” reveals that he is on an acid trip during this song, which adds a surrealness to the musings in the track.

This narrative-style rap tells the story of three young girls who were dealt a bad hand. They each turn to vices because their parents don’t look out for them or provide for them. They dream of running away, wishing they could escape all of their problems and live in a paradise they can only imagine.

A classic track about the pain of seeing an ex move on, Marvin’s Room sees Drake drunk calling a past flame and trying to convince her to leave her man and come back to him. He’s angry and devastated, a combination that makes him turn to alcohol and harsh words as a way to cope.

My Life – The Game

The Game and Lil’ Wayne collaborate in this song to pay their respects to the people in their community that they’ve lost. There are mournful and frustrated undertones to the song, though, as they talk about how unfair it is for them to have suffered like this. They wonder what they did to deserve a better fate than all the others, saying “dear Lord, you done took so many of my people, I’m just wonderin’ why you haven’t taken my life.”

Echoing and ambient production make ‘I Fall Apart’ an immersive heartbreak song. The woman Post Malone sings about in this song has completely betrayed him, taking his heart and ripping it clean in two. He sings, “I fall apart down to my core” to bluntly explain what this woman has done to him.

One of the most iconic beats of Dr. Dre’s discography, this single was released after a seven-year hiatus- quite the comeback! He raps about some of the rough times and lost relationships during his time away from music, but ultimately he is back and ready to take over the music scene once again.

This track opens with the line “after laughter comes tears,” which is sampled from the 1960s song by the same name by Wendy Rene. It perfectly sets up the theme of the whole song, where the narrator reflects on happy times from the past and how he is only left with tears now.

The opening line, “mama I just killed a man, body is still tremblin’, can you feel my hands?” is quite a shocking way to start a song. The song uses audio clips from the news that describe the crime this line refers to. It’s about the awful things that some people have to do to get by and be respected by gang culture.

Losing a friend unexpectedly is an indescribable tragedy, but Meek Mill and Young Thug do it with grace and passion. They each speak about their experiences with death, and how difficult it was to watch a friend die. They march on in memory of their friends, though, living the lives that those guys will never have a chance to.

YoungBoy Never Broke Again gets some heavy thoughts off of his chest in ‘Death Enclaimed,’ a track with a great beat and intense vocal delivery. He gets real about his mental health and personal relationships, and how living life in the public eye can be exhausting because of constant rumors and judgment.

A toxic failed relationship has led to YNW Melly falling into a deep depression, and he talks about his battle with suicidal thoughts in this song. He directs the track to an ex, saying that “you took my soul from me” and “your love is suicidal.” He’s recovered now, realizing she was just a lesson he needed to learn, but that doesn’t mean he will ever forgive her for the pain she caused.

Obviously, drugs are a dangerous and addicting vice, but the temporary relief from pain they provide is why so many people are drawn in by them. Lil’ Wayne says, “only once the drugs are done do I feel like dying,” telling us that being high is the only time he doesn’t feel like he wants to die.

This track tells a love story with a tragic end. ‘Renee’ is a woman that the narrator meets on the street, and he offers to walk her to the subway. They strike up a conversation and hit it off, immediately becoming infatuated with each other. Unfortunately, the story ends with Renee being shot and killed, leaving the narrator behind with nothing but grief and memories.

Common takes on the nuanced topic of abortion in this song, talking about the complicated feelings that come with finding out your girlfriend is pregnant, and the difficult decision over what to do next. Though the couple doesn’t seem to want a child at first, preferring to plan and prepare for a kid, Common wonders if this is too similar to playing God.

D12 raps about the death of one of their members, Bugz, expressing regret and sorrow over his loss. The line “I shouldn’t have left” shows the guilt that these guys are feeling- they think if they had been with Bugz, the altercation that led to his death wouldn’t have happened. It’s a depressing song, but a beautiful homage to an old friend.