21 Songs About Missing Someone You Love With All Your Heart 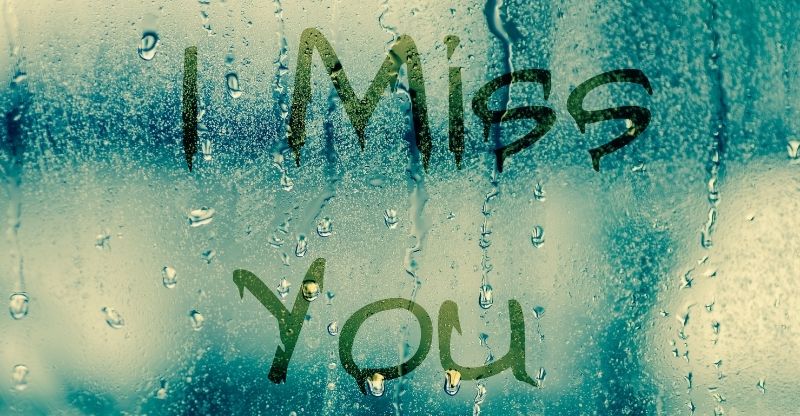 We all know the feeling of missing someone close to us, whether that’s a partner, friend, or family member.

So what are the best songs to listen to when you miss someone you love?

That’s what this article is all about.

If your loved one is no longer with you, gone away temporarily (or worse, for good) but you still miss them like crazy, check out some of these best songs about missing someone.

Our Favorite Songs About Missing Someone

“Wish You Were Here” by Pink Floyd

We have to start with this classic number from prog-rock maestros Pink Floyd.

This song is about detachment, and how some of us deal with the world by withdrawing physically, mentally, or emotionally.

The inspiration, like much of the album ‘Wish You Were Here’ (especially ‘Shine on You Crazy Diamond’) was Pink Floyd’s founding member Syd Barrett and his issues with mental health.

It’s easily one of the more popular acoustic guitar songs, loved and played by legions of beginners. Especially, as it’s relatively to play (the signature riff is super simple).

Related: It’s no surprise this appears on our best acoustic guitar songs list.

“Miss You” by The Rolling Stones

One of their first (and only, thank goodness) forays into disco – or R&B, as they preferred to think of it – ‘Miss You’ brings together a funky bass line, horns, and drums for a nice danceable groove, giving Jagger something to wiggle his hips to on stage.

Jagger said of the song “‘Miss You’ is an emotion, it’s not really about a girl. To me, the feeling of longing is what the song is.” However, the song is widely considered to be about his failing relationship with his then-wife, Bianca.

On harmonica duties is Sugar Blue (James Whiting), a busker who was playing his harmonica in the Paris metro when someone from the Stones label heard him and brought him to the sessions.

I hope they tipped him well.

“So Far Away” by Dire Straits

The first track from their seminal eighties album ‘Brothers in Arms’ is a song about conducting a relationship over the phone (or ‘long distance love’ as it’s known).

A very common situation when you’re on tour.

Knopfler said about the topic of the song “quite apart from anything else, we are now a world of travelers and air travelers. Families are split up in different parts, all over the place,” which he said “is a joke”.

Fast forward to current times, and we have numerous video conferencing tools.

Are we any closer? I’ll let you decide.

“Missing You” by Steve Perry

A common thought if you’ve ever broken up with someone is “could you have done something different? Could you have given more?”

In fact, the guilt can haunt you for a long time, even if you’ve moved on. You lost the plot, and things went south. But now it torments you, and the funniest thing: you miss that person now! You still want them.

“Memories surround me, won’t let me forget, I was so wrong”

Relationships leave a lasting impression on you, you can’t dust people off and just carry on regardless.

When you lose a significant other, you lose a little piece of yourself. You sometimes stop enjoying the stuff you did before, and you don’t know what to do.

That’s the premise of this song.

The singer was “planning everything for two, doing everything with you” but “now that we’re through, I just don’t know what to do”.

“Far Away” by Nickelback

This song is about realising how much you truly love someone, despite all the time you’ve kept them waiting.

But now the protagonist realizes “That I love you, I’ve loved you all along, and I miss you, been far away for far too long”.

“I’ll Be Missing You” by Puff Daddy featuring Faith Evans

Big Poppa was a good friend of Puff Daddy (known as P. Diddy now) and they appeared together on the track ‘Mo Money, Mo Problems’, a superb song about money.

The track samples The Police’s “Every Breath You Take”, despite not having permission to sample it initially. However, Sting appreciated the sentiment for P.Diddy’s fallen friend and was ok about them using it (he was in fact granted a writer’s credit, so did very well out of it as the song was a massive hit).

We also feature this track on our songs about losing someone playlist.

“Thinkin’ Bout You” by Ariana Grande

‘Thinkin’ Bout You’ is a sweet song about missing that special someone.

Speculation is rife about who the other person is. Was it her boyfriend at the time (Alvarez), or was it even the late, great Mac Miller? I hope so, that guy needs to be remembered more.

“I tried to make it through the night, but I can’t control my mind”

Another classic song about missing someone after a breakup, and wanting to rekindle an old love.

It turns out she’s still in love with her ex.

She convinces herself all she needs is “just one night, and we’ll have that magic feeling like we used to do”.

How likely is this to happen, really? Maybe someone needs to tell her ‘move on girl’!

“The Bed’s Too Big Without You” by The Police

This song could simply be about an overly big bed, but I think that might be taking too literally!

The track includes the hilarious line “made love to my pillow but it didn’t feel right”.

It’s a great bouncy track, if you pardon the pun.

“I Need My Girl” by The National

Despite all the glitz and glamour, the constant touring of a professional musician can be really tough and make them miss home (check out Pink Floyd’s track Nobody Home for evidence of this, a great song about being homesick).

Musicians also sometimes feel absent from family stuff, as they’re away so much of the time, hence the line ‘I know I was the 45% of then’ (a comment about not being totally there for his wife and kids).

Singer Matt Berninger said of the song “It’s just a song about missing your wife, girlfriend, whoever.”

“Reminds Me of You” by Van Morrison

A heartfelt song by Van the Man here, in a predicament many of us can relate to.

It’s about when someone breaks up with you and but you’re still in love. You’re in a state of despair and you can’t find anything to do that doesn’t remind you of them.

“Everything I do reminds me of you”

He knows the love is over, but his heart won’t let go “my head says no but my soul demands it”. He’s tormented by what went wrong, he really can’t see where it all went wrong “where I tripped and went wrong, I’ll just have to guess”.

Sometimes you have to accept you’ll never know what went wrong. Time to move on.

“Lay Me Down” by Sam Smith

The lead single from his bestselling album ‘In the Lonely Hour’ and the song that kick-started his career.

At a gig at the O2 Academy in Brixton, he explained the inspiration behind the song (the unrequited love he suffered when he fell for a guy who turned out to be straight).

Written for the movie Romeo Is Bleeding (taken from the Tom Waits song), this was Bon Jovi’s best-selling single in the UK, selling over half a million copies.

“I’ll be there, till the stars don’t shine, till the heavens burst, and the words don’t rhyme”

A typical love song? Not really. The girl in question has moved on, and he misses her like crazy.

In the words of Jon Bon Jovi, “this guy is practically a stalker. He’s a sick human being.”

Let’s move on shall we!

“Thinkin’ Bout You” by Frank Ocean

Released as the lead single from Frank Ocean’s debut studio album Channel Orange, “Thinkin Bout You” is a vulnerable song about a relationship just out of his reach.

“Tears in Heaven” by Eric Clapton

This sad song needs no introduction. The legend that is Eric Clapton has suffered the one thing any parent dreads with all their heart, the passing of a child.

His four-year-old son Conor fell out of a 53rd floor window in New York City.

A hugely tragic event, it’s a testament to the great songwriter that he was able to move on, and write this incredible song.

“Would you know my name, if I saw you in heaven?”

“Missing You” by Diana Ross

Written with Lionel Richie, the song is about losing her former Motown colleague and friend Marvin Gaye (who was tragically shot and killed by his own father in 1984).

It was later covered by Whitney Houston, and sampled on Master P’s ‘Gangstas Need Love’.

“I Will Always Love You” by Whitney Houston

Featured in the movie The Bodyguard, this song was made famous by Houston, but was actually written by Dolly Parton in 1974 (Parton did well from the success of the Houston version, banking $6 million. She was reported as being “blown away” by Whitney’s version. I bet!).

As for the lyrics, it’s a song about letting go of someone you love, and an acceptance that – despite things being over – she’ll always love him.

“Bittersweet memories, that is all I’m taking with me, so, goodbye”.

Related: see our playlist of songs with love in the title.

“So Far Away” by Carole King

Famous for songs such as ‘You’ve Got a Friend’ (one of the best songs about friendship), Carole King took her pen to writing a song about missing someone here.

So Far Away is about missing someone special, but also a commentary about the frantic pace of things “doesn’t anybody stay in one place any more?”.

She needs a hug, but time separates them “holding you again could only do me good, oh how I wish I could but you’re so far away”

It was a favorite of Amy Winehouse and was played at her funeral in 2011.

“Ain’t No Sunshine” by Bill Withers

With a stellar line up of session musicians on the track (including Stephen Stills on guitar), it’s been covered by everyone including Michael Jackson and Paul McCartney.

It’s a great song about missing someone “ain’t no sunshine when she’s gone” and loneliness he feels “and this house just ain’t no home”.

“Come Back, Be Here” by Taylor Swift

Another of those sad songs, but this time it’s about not wanting to miss someone (because you know you’re in too deep).

“I told myself, don’t get attached” she says.

But “when the feeling sinks in, I don’t wanna miss you like this.”

Songs About Missing Someone – Final Thoughts

We’ve covered a lot, from Pink Floyd to Taylor Swift!

What unites all these songs about missing someone is that longing for someone – whether that’s a romantic relationship, a lost love, former lover, or a friend or relative who recently passed away – is all part of the human condition.

It’s the emotion that keeps us coming back for more love.