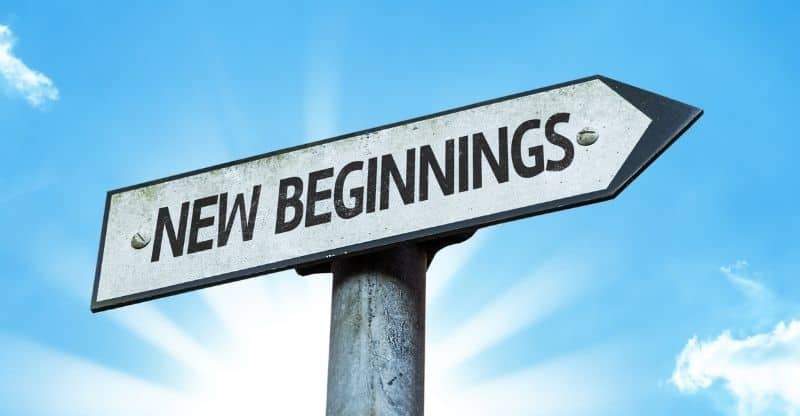 Need to change the direction your life is going in? Then these songs about new beginnings will give you the inspiration you need.

Here you’ll find songs about creating a better life, about renewal, about startinmpg a new chapter, about becoming a better person.

A life of bliss may be just around the corner, but you might not know it yet. So get ready to shrug off the old and welcome in the new…

‘Pack It Up’ by Pretenders

Sometimes you have to give your partner the heave-ho when they’re no good and choose a new beginning. Or to ‘pack it up’ as lead singer Chrissie Hynde sings.

With a riff reminiscent of the Sex Pistols, this rocker from The Pretenders doesn’t hang around with the insults. From the top of the song, Hynde declares: “you guys are the pits of the world!”

She’s determined to find a fresh start and doesn’t care about the havoc she reeks: “I’m burnin’ every bridge”.

And by the sounds of the guy, you can hardly blame her. She’s better off without his ” insipid record collection, that dumb home video center”.

The lyrics are thought to be about Nick Lowe, the producer of The Pretenders first album.

It’s about new beginnings; this song tells us to “turn the clocks to zero” – in other words, to wipe the slate clean and begin again.

If the harmonica sounds familiar, that’s because it’s no other than Stevie Wonder who stepped in to play a chromatic harmonica part.

On New Year’s Eve, 1999, Sting performed this song as the clock struck midnight in New York.

A song that’s brimming with optimism for the future, ‘feeling good’ is one of Nina Simone’s most popular numbers.

The song reminds us there is always hope, however bleak things may seem.

Simone aspired to be a concert pianist from a young age.

From Beck’s 2005 album ‘Morning Phase’, this song speaks to renewal. The lyrics are about shedding the things that hold us down, whether that be mental, physical, emotional, whatever.

For Beck, it was most surely physical; he’d recently overcome a spinal injury that (tragically for a singer) hindered his voice.

Beck’s albums Odelay and Sea Change are both ranked on Rolling Stone’s list of the 500 greatest albums of all time.

‘I Can See Clearly Now’ by Johnny Nash

One of those songs you’ll definitely have heard, “I can see clearly now” is another staple in the ‘new beginnings’ canon of songs.

One of the best songs about starting fresh and moving on, it’s also about hope and courage. It will inspire listeners to persevere through the hard times and realize the dark days are behind you.

A young Bob Marley worked as a session musician and associate producer on this track.

‘(Just Like) Starting Over’ song captures the optimism of the rekindled romantic relationship between John Lennon and Yoko Ono. It’s a throwback to fifties-style rock ‘n roll tune reminscent of Roy Orbison, or, well, early Beatles.

Sadly the song is overshadowed by Lennon’s imminent death. The day the song was released (October 27, 1980) was the precise day that Mark Chapman bought the gun he’d use to end Lennon’s life.

We don’t know the time or manner in which we’ll pass, but tragically for Lennon, it was all too soon.

This song (and the album ‘Double Fantasy’ from whence it came) was heralded as Lennon’s new beginning (he hadn’t released anything new since 1975).

‘We’ve Only Just Begun’ by The Carpenters

‘We’ve Only Just Begun’ is one of the most popular songs about new beginnings ever recorded. No surprise then that it’s also a popular ‘first dance’ at weddings, thanks to its theme of living in harmony and togetherness.

Featuring the clarinet and piano (that became the hallmark of The Carpenters), it reached number two in the US charts, selling over a million copies.

‘We’ve Only Just Begun’ was originally written for a bank commercial in the US (Crocker Bank). More recently, it was used in 2007 horror movie ‘1408’ where the song marks the beginning of the terrifying ordeal (played by the brilliant John Cusack).

‘Begin’ sounds gorgeous, and glistens and glides as it goes. It’s a dreamy composition, the audio equivalent of stepping into a hot, lavender-infused bath.

The words ask for forgiveness: ‘change your mind, ’cause I wasn’t thinking right, we can begin at the top’.

We all need to forgive each other sometimes.

Shallou is also an environmentalist and supporter of The Environmental Defense Fund.

A piece of classical ambient / post-rock here about making a fresh start.

This sentiment is reflected in this song with the words “We thought they would just appear, and our lives would start, but nothing starts without you.”

Daydreamer are a band from Milford, Massachusetts.

‘Start Again’ is a dubstep track with a cinematic feel about finding a new path – about doing away with old habits – remembering that time will not hang around while we decide: “time is not on our side, another day won’t stem the tide.”

The song was released on Seven Lions’ Start Again EP.

A new beginning is usually the end of something; in this case, it’s a bad relationship.

It’s basically a break-up song with a difference: the words are a rallying cry to women to take charge when they’re in a bad relationship. As such, it’s about female empowerment or ‘girl-power’.

The ‘new rules’ are very clear: One, don’t pick up the phone, Two, don’t let him in, Three, don’t be his friend.

The ‘Dua’ in Dua Lipa (the lead singer’s name) means ‘Love’ in Albanian.

‘Here Comes the Sun’ by The Beatles

One of the best songs about new beginnings is The Beatles’ ‘Here Comes the Sun’ by George Harrison.

The song describes the long, cold lonely winters in England, which have a habit of going on a bit. It’s also a metaphor for the later years of The Beatles, where the band had to handle more of their business affairs (accounting etc.) since their manager Brian Epstein died in 1967 (which, unsurprisingly, George hated).

The sun is a symbol of optimism and a brighter future. It was one of the first pop songs to feature a Moog synthesizer.

Tom Petty said of this song in Rolling Stone magazine: “No piece of music can make you feel better than this. It’s such an optimistic song”

Harrison spontaneously wrote this in his friend Eric Clapton’s garden on a sunny spring day.

‘Brand New Sun’ appears on Jason Lytle’s ‘Yours Truly, The Commuter’ album and marvelously captures the bliss of punching the reset button on your life.

It also sounds like’s straight out the Neil Young (or even Elliott Smith) songwriting guidebook (no such book exists, I wish it did!).

Played on an acoustic guitar with a stripped back band, the song is about regret: “Damn….. how did it get so bad? With all the dreams we had, and now you seem so sad.”

The words are also apocalyptic: “You should hold my hand, while everything blows away / And we’ll run, to a brand new sun”

American Songwriter called the 2009 album ‘Yours Truly, the Commuter’ “one hell of a re-emergence.”

Somewhat of a ‘born again’ song, though not in the religious sense (interestingly, that would come later), Dylan’s ‘New Morning’ (also the name of the album) was his first album of the ’70s.

This song is about renewal, but also about a fresh start, a ‘new morning with you’. It’s reminscent of the laid-back country music style heard on his ’60’s album John Wesley Harding.

Note: I couldn’t find a good Dylan version of this song on YouTube, so included this cover (pretty good, isn’t he).

The album ‘New Morning’ was seen as a return to form for Dylan. That was until the album ‘Blood on the Tracks’ was released in 1975 which met huge critical acclaim.

‘Out on the Weekend’ by Neil Young

Neil Young’s No.1 album ‘Harvest’ put this Canadian songwriter on the map, and the first track – ‘Out on the Weekend’ – set the scene nicely for the excellent album that would bring to the world the songs ‘Old Man’ and ‘The Needle and Damage Done’.

In contrast to his guitar-heavy, grungier work of ‘Down By The River’ with band Crazy Horse, this sounds more like a country song.

The theme is autobiographical and is about his lonely pursuit of success as a musician.

He will ‘find a place to call my own and try to fix up, start a brand new day’. It’s one of the best songs about new beginnings and starting a new life away from home.

An all-star cast of musicians collaborated on the Harvest album, including James Taylor, Linda Ronstadt, and Jack Nietsch.

‘Absolute Beginners’ fuses ’50s-style ‘doo-wop’ with a modern (at the time) ’80s sound. The result is a gorgeous sounding, horn-laden groove that captures the theme of ‘young love against the odds’ perfectly.

Bowie was keen to get an innocent-sounding female vocal on the track (he said he wanted ‘a shop girl’) so one of the session musicians (Kevin Armstrong) went and grabbed his sister – 22-year-old Janet Armstrong who was working at a shoe shop at the time – to come and sing on the track.

The session musicians used on this track were invited to Abbey Road Studios by a certain ‘Mr.X’. When they arrived, they realized it was Bowie.

The last song on Mancunian Elbow’s landmark album (The Seldom Seen Kid), ‘One Day Like This’ is a brilliantly written, uplifting song about the morning after.

He’s on top of the world, ‘so throw those curtains wide, one day like this a year will see me right.’ (‘see me right’ here means ‘will do’)

Sir Michael Caine picked this as one of his Desert Island Discs.

‘Brand New Friend’ by Lloyd Cole and the Commotions

A new friendship is another less talked about type of new beginning.

As we discussed in our playlist of friendship songs, good friends are the elixir of life. You should cherish the ones you have, and nurture new friendships whenever they appear.

Lloyd Cole and the Commotions were formed in Glasgow, Scotland in 1982.