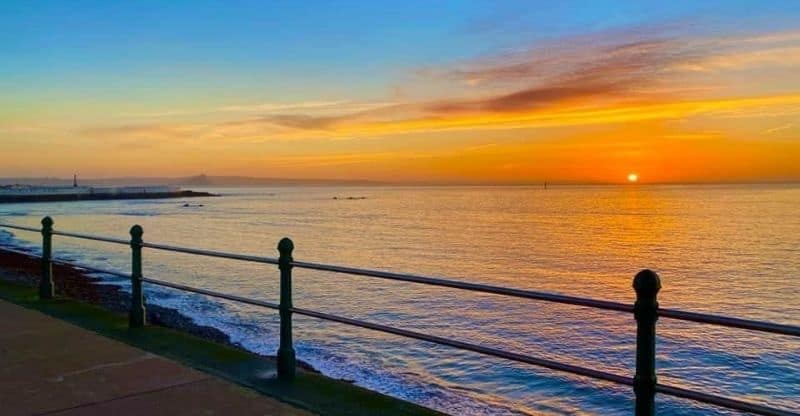 Have you ever spent an evening looking up into a clear sky? It’s a mesmerizing experience to observe the moon, a planet or two (if you’re lucky), and the beautiful twinkling stars.

Or how about a sunny day when the sky is a brilliant crystal blue. Or a red sky at sunrise (like you see in the pic). Even on a rainy day, the cloud formations can stop you in your tracks.

You see the sky is a wonderful thing. We need to give it the attention it deserves. It’s beautiful, it’s always changing, and last time I checked, it’s free.

As you’re about to see, there are some brilliant songs about the sky too (or songs that include ‘sky’ in the title).

‘Big Sky’ appears on Kate Bush’s seminal ’80s album, Hounds of Love. The protagonist is looking at the big sky, watching the clouds change and create different shapes. The clouds are actually a metaphor for her own personal change: “you never really understood me,” she sings.

The video, directed by Bush, is suitably insane with Bush jumping around in a silver suit surrounded by aviators, astronauts, and…yes, Superman.

There’s a theory that the ‘Joseph’ in the song refers to a certain Joseph Shabalala, a South African singer and musician who was the founder of the choral group Ladysmith Black Mambazo (and who Simon collaborated with on the brilliant song, ‘Homeless’).

British singer-songwriter Nick Drake didn’t live long enough to see his work given the appreciation it deserved. These days, his music has a significant following and has had a sizable impact on modern (especially indie) music.

‘Northern Sky’ was one of his most touching pieces, where he sings about the hope a new romantic involvement had given him.

The Sky is a Neighborhood – Foo Fighters

This song came to frontman Dave Grohl as he lay out one evening looking up at the stars. “When you look up at the night sky, you realize that you’re not only part of the universe, but the universe is part of us. It really moves me,” he’s on record as saying.

A Sky Full of Stars – Coldplay

‘A Sky Full of Stars’ is a house-influenced dance track they recorded with EDM producer Avicii. It’s an outpouring of emotion that comes at the end of the rather somber Ghost Stories album that was written after Martin’s split with ex-wife Gwyneth Paltrow. It captures the moment when you realize you’re going to be ok.

Here’s a gorgeous song from The Wall album. According to writer Roger Waters, the lyrics are about remembering the innocence of your childhood (represented by a blue sky, as in “goodbye blue sky”) and getting ready to set off into the (darker) rest of your life. It’s about growing up, basically.

Lucy in the Sky with Diamonds – The Beatles

Of course, no list of sky songs would be complete without this classic piece of Beatles psychedelia. As the letters of the song are LSD, some thought the song title was a cryptic nod to the drug L.S.D, which was all the rage in the late ’60s.

Lennon later confirmed that was completely accidental, but McCartney admitted the song was certainly influenced by the trippy substance (like much of their later material).

Nothing cheers up the human spirit like a sunny blue sky. “Everybody smiles at you,” frontman Jeff Lynne sings. It’s true, life is like 10X better on a sunny day (the weather plays such an important role in our overall well-being.)

See the Sky About to Rain – Neil Young

Talking of weather, there’s nothing like a spell of rainy weather to make you leave your curtains drawn and not want to go out. Here, Young uses rain as a metaphor for ‘bad times,’ and can see it about to rain.

One of the most underrated alt-rock bands in the ’70s, The Marshall Tucker Band (with their ace guitarist Toy Caldwell) made some amazing music. The Blue Ridge Mountains are a province of the larger Appalachian Mountains range in the Eastern United States where the skies are apparently amazing.

Ribbon in the Sky – Stevie Wonder

Here’s a nice little love song from the legendary Stevie Wonder. A ribbon in the sky could be a rainbow (you don’t get a rainbow without some rain), or it could be like the ribbon on a gift (the gift of love). I’ll leave that for you to decide.

The Great Gig In the Sky – Pink Floyd

This instrumental appeared on Floyd’s seminal ’70s album, Dark Side of the Moon. Try listening to this on a clear night when the stars are out. It’s incredible.

Of course, with the ever-increasing number of telecommunications satellites orbiting the world, there’s a growing issue with pervasive light pollution that needs addressing.

Traffic in the Sky – Jack Johnson

This song was inspired by the terrorist atrocities in NYC on 9/11. Johnson was in Brooklyn on that fateful day and penned this thoughtful song sometime after (but delayed releasing it for some time, out of respect.)