25 Songs about Suicidal Thoughts That Offer Comfort and Hope 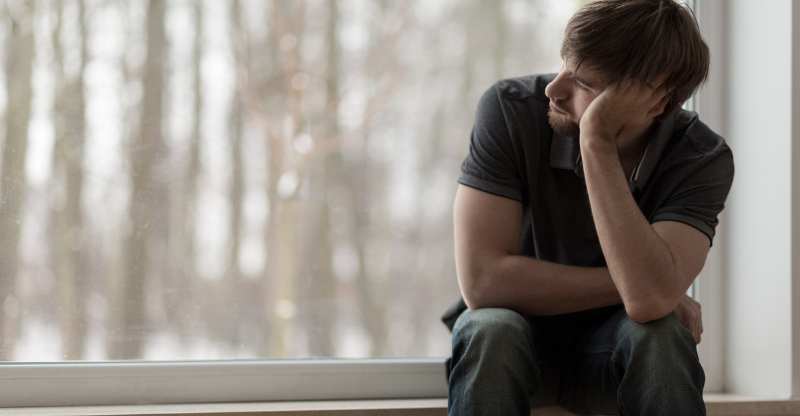 These songs have offered comfort, solace, and hope to those struggling with depression, anxiety, and thoughts of self-harm over the years. Many songs were written after band members and their families were personally affected by suicide, or by connecting with their fan bases and listening to peoples’ stories about their own mental health struggles. Anyone struggling with suicidal thoughts can call the National Suicide Prevention Lifeline 24/7 at 1-800-273-8255.

Band frontman and Creed songwriter Scott Stapp wrote ‘One Last Breath’ after a significant hiatus from songwriting due to the release of their album Human Clay. One of the first songs he spent time constructing when he began work on their next project, Weathered, the reflective single focuses on a protagonist who is trying to move forward with his life but can’t forget his past mistakes. ‘One Last Breath’ offers a kindred spirit to those struggling with depression and mental health issues.

After spending years getting to know his fan base, Logic realized the deep impact his music was having on his supporters. He realized people were turning to his songs for comfort during times of great pain. His single ‘1-800-273-8255’ has the number for the National Suicide Hotline in the title for any listener who may need it. The track features dual protagonists, with the first character calling the number for help and the second character listing all the reasons the first character needs to continue living.

This moving track by alt. rock band Three Days Grace highlights sexual abuse survivors and the PTSD symptoms they often experience long after the abuse ends. Though both the song and its accompanying music video bravely accentuate the dark thoughts and pain that comes along with PTSD, the layered story also focuses on finding hope and seeking help to pull oneself out of darkness.

Rock bands often develop close relationships with their supporter bases and Five Finger Death Punch is no different. For their emotional track ‘Coming Down,’ they teamed up with America’s National Suicide Prevention organization to help bring awareness to their fans about anti-suicide resources available should they need them. Penned with raw, uncensored lyrics, listeners can find solace in the verses and chorus because it helps them realize they aren’t the only ones who have ever felt this kind of pain and sadness.

Rise Above This – Seether

Bandmembers of Seether have been personally affected by suicide, including lead singer Shaun Morgan, whose brother took his own life in 2007. ‘Rise Above This’ offers a hopeful, empowering approach to those struggling with their mental health. Morgan wrote the track just before his brother’s death. He was hoping to be able to play it for him to see if it could help him, but he never got the chance to do so.

This gentle tune has a rare country feel to it for Nickelback due to their partnering with several Nashville songwriters during the writing process. ‘Lullaby’ can extend comfort to those who are contemplating self-harm and who are experiencing painful emotions, from grief and sadness to depression and anxiety. Frontman Chad Kroeger drew from real-life experiences while co-writing. The song partly deals with one of his childhood memories, when he walked into a room to find his babysitter crying because she had just received word her significant other had died in a motorcycle crash.

“I wish you would step back from that ledge, my friend.” One of Third Eye Blind’s biggest hits, ‘Jumper,’ extends an olive branch to those who have dealt with bullies at some point during their lives. Oftentimes, this kind of repeated abuse has long-term repercussions, and that’s what the band wanted to highlight in their single. The song’s story features a guy attempting to talk a friend out of ending their life due to intense bullying he went through at school because he was secretly gay.

“…it came on just in time. This song saved my life.” After receiving letters from fans detailing their battles with suicidal thoughts and how their music played a pivotal role in keeping them alive, Simple Plan decided to write a song in honor of their supporters. The moving track is an ode to their fans, who the band has always felt closely connected to. Featuring paraphrased snippets from letters received, the song is an anti-suicide symbol and reveals how the power of music can save lives.

Many fans of Good Charlotte have turned to their music during times of need, when they felt intensely alone and were searching for support. ‘Hold On’ is a song written for those fans, and is a hard-driving but soul-stirring track directly addressing those battling depression, anxiety, and suicidal thoughts. The anti-suicide track tells them to hold on because, even though it doesn’t seem like it ever will, life does get better.

“I don’t want your good advice, or reasons why I’m alright.” This heartfelt track by pop singer Katelyn Tarver contains open-ended lyrics that allow listeners to connect to the story for many different reasons. Though Tarver wrote it about a toxic relationship, the song has gone on to represent those who are struggling with mental health issues. The chorus succinctly and perfectly sums up what many feel while their struggling with depression and feel alienated from a society who judges them, “You don’t know what it’s like.”

Christian rock band Skillet pairs hopeful messages within their music alongside words of encouragement stemming from the teachings of Jesus. Moved by one of the personal stories a fan told him, band leader John Cooper wrote ‘The Last Night’ in her honor. The song is told from the perspective of Jesus, who tells anyone who is contemplating suicide or self-harming to focus on his word and reach out to him while living, and in Cooper’s words, “…it will be the very last night you ever spend alone.”

With Linkin Park’s ‘Heavy,’ late frontman Chester Bennington discusses carrying the weight of the world on one’s shoulders and how it can become too heavy to bear at times. After his suicide, many people including his own friends and family, revisited the song to try and understand his headspace. Singer Kiiara is featured on the track, which marked the first time the band incorporated female vocals into their work.

I Need a Miracle – Third Day

Christian rock band Third Day wrote their poignant track ‘I Need a Miracle’ after an emotional conversation they had with a couple post-concert while on tour. The fans told them that their son was going to commit suicide, but when he turned on his car radio he heard Third Day’s single ‘Cry Out to Jesus’ and it helped him change his mind. ‘I Need a Miracle’ expands on the story and the personal experiences many have who struggle with their mental health.

Punk group Blink- 182 traded in their popular humorous tracks for a melancholy, heartbreaker of a ballad for their single ‘Adam’s Song.’ Bandmate Mark Hoppus wrote the tune while experiencing a prolonged wave of depression during a tour in which he was terribly lonely and knew he ultimately had no one to go home to. Fellow bandmate Tom DeLonge incorporated the story of one of their fans who ultimately took their own life into the song as well.

“One day you’ll see the clear blue. Beyond the Gray Sky.” Lead singer Nick Hexum was personally affected by suicide when one of his dear friends took his own life. Eventually, Hexum found himself revisiting his friend’s emails, taking note that he often mentioned a “gray cloud” that hung over him. When Hexum wrote ‘Beyond the Gray Sky’ for his band 311, the song became an anti-suicide symbol, telling listeners there are blue skies ahead despite the gray clouds now.

Listen Before I Go – Billie Eilish

Haunting piano and sirens in the background drive this evocative Billie Eilish track. She wrote ‘Listen Before I Go’ with her producer-songwriter brother Finneas before she reached fame. Needing an outlet for the intense bouts of depression she often experienced as a teen, she wrote the tune as a means of imagining what it would be like to end her life.

“…take it from me, it’s not the end.” Alt. rock band Smile Empty Soul offers words of encouragement and comfort with ‘Stay Alive,’ an anti-suicide song that gives hope to those who feel like they don’t have any left. The empowering track appears on their introspective album, Consciousness.

One’s deepest emotional thoughts and pain are uncensored with hip-hop artist Josh A’s ‘Suicidal Thoughts.’ The push and pull of mental health issues and the responsibility that comes along with having a career and people who depend on you is front and center with this brutally honest take on suicide. The raw power of the track can act as a helping hand to those looking for an outlet to safely release their inner-most struggles.

“My skin is very young. But my heart is very old.” This pensive Issac Dunbar number takes a gentler approach to the realities of trying to end one’s life. Full of painfully poetic lines that are perfect descriptors for the effects depression has on one’s mental and physical health, the song’s story ends up being a valiant one. Despite attempts, the singer eventually realizes the importance of each individual life and that a little self-love can go a long way.

Frontman Josh Katz penned ‘Ghost’ as a form of therapy after experiencing a series of panic attacks from being on the road and performing nonstop for an extended period of time. Though he never went as far as trying to end his life, his deeply depressed mental state was a tough experience to break free from. He used the song as a way to symbolically take matters too far without doing it in real life.

“Turn around and walk the razor’s edge.” In the early days of Rush, their work often challenged the status quo. They embrace individualism once more with ‘The Pass,’ which openly talks about suicidal tendencies often experienced by teens, and society which at times “romanticizes” it. The core message of the song relates to the sanctity of life and the importance of living it to its fullest while you can.

A brutally honest track about late nights spent contemplating suicide, east coast rap icon Notorious B.I.G. holds nothing back with his track ‘Suicidal Thoughts.’ The song opens with him calling one of his best friends, fellow rap game icon Puff Daddy, who proceeds to try and talk him out of it. The confessionalist song appears on Notorious B.I.G.’s concept album, Ready to Die. ‘Suicidal Thoughts’ is the last track on the album, giving the song’s lyrical content even more weight as it suggests a finality to the rapper’s life.

Hard rock band Metallica has never shied away from tackling tough subjects. With ‘Fade to Black,’ an early but enduring single of theirs, ending one’s life is contemplated against dynamic instrumentation ranging from acoustic, folksy guitar to one of their most iconic solos to date. ‘Fade to Black’ remains one of the band’s most beloved fan-favorites due to its poignantly relatable message.

His signature track symbolizing the manic-depressive ups and downs of his life, James Taylor’s ‘Fire and Rain’ is deeply human, and delves into his drug addiction, a close friend who took their own life, and time spent in a mental asylum conjuring up make-believe bands. Taylor’s close friend and fellow musician Carole King played the piano parts in the recording.

Though Johnny Cash’s cover of ‘Hurt’ is still one of his most-streamed tracks to this day, Nine Inch Nails’ original rendition of the haunting single is equally as moving. Oscillating between images of self-destruction and flickers of hope, frontman Trent Reznor is espeically keen on performing this song, and always saves it for the very end of their live sets.