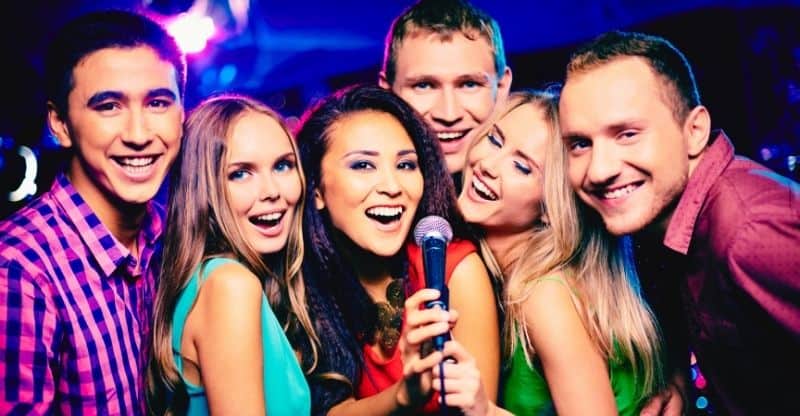 Singing doesn’t have to be hard if you pick the right songs. So here’s our list of easy songs to sing that will make you sound like a pro.

They’re all easy for beginners to sing and none of them require tricky key changes, low notes, high notes, big notes, or any of that kinda stuff.

Regardless of your voice type or vocal range, you’ll be able to sing them.

Note: this is a list of simple songs – you won’t find stuff like Queen’s Bohemian Rhapsody here. For that kinda thing, check out our best karaoke songs.

If you’re a Beatles fan, here’s a great choice.

With simple, easy-to-remember lyrics, you could almost sing it in your sleep. The song is also one of the best songs about peace ever written with a great message, so you’re efforts should be appreciated if you sing it at a Karaoke bar.

The chorus has a slightly high note, but you should be fine.

This one from pop superstars Maroon 5 is better suited to female vocal ranges, though not impossible for guys (the singer Adam Levine is a guy, remember!).

It’s a great, modern love song that most Karaoke bars will be dig.

If you want something a little romantic, try this slow one from Jason Mraz. The song is all about living in the present and not getting too hung on stuff.

It’s simple to sing, in a nice and easy key, and sounds good on either guitar or piano. Give it a go!

One of the most popular songs ever made, ‘Ain’t No Sunshine’ by the magnificent Bill Withers, is also one of the easiest to sing, thanks to its comfortable range.

It’s nice and repetitive with no chorus, so it won’t catch you out. But, of course, you also get to sing the ‘I know, I know, I know,…’ line, which is reason enough to sing it!

This one is a fun, uptempo song that everybody knows (thanks in part to the movie and hit musical) and should get people joining in.

It’s in a nice and easy range for most female singers, too. But, guys, watch out. This might be a little too high.

‘Breakfast at Tiffanys’ – Deep Blue Something

It’s another perfect song here, especially for guys, as it’s well within most men’s vocal range. The chorus is a load of fun too.

This is a good one if you want to play along on an acoustic guitar, too, as it’s one of the easiest guitar songs to play.

‘Wish You Were Here’ – Pink Floyd

Arguably the best song on the list purely from a songwriting point of view, ‘Wish You Were Here’ is a heartfelt tune about missing someone. It’s also straightforward to sing, as it’s David Gilmour on lead vocals (who wasn’t the most accomplished of singers, none of the members of Floyd were, which doesn’t detract from their brilliance.)

One thing’s for sure, though. If you’re brave and give this your best shot, the audience will love it.

This ballad is a nice and chilled-out song. The lyrics are easy to remember, as is the melody, and as it’s Elvis Presley we’re talking about, most people will recognize it too.

You get extra points for striking some Elvis poses while you sing this song, though not compulsory 🙂

‘Wind of Change’ – The Scorpions

Another crowd-pleaser here from German band The Scorpions. It was a massive hit in the ’80s. It became the song that embodies the falling of the Berlin Wall and the political and cultural revolution at the time. Its become one of the most famous songs about change ever recorded.

It’s super easy to sing too. Go for it!

This is a perfect song for beginners, as you don’t need a very broad vocal range to sing it, plus the verses are almost spoken.

We also include it on our list of songs about cars if you’re interested. But, of course, it’s not really about cars at all!

It’s a perfect one for guys to sing, thanks to the low vocal range of Johnny Cash. In addition, its repetitive melody makes the song pretty easy to pull off.

You could also sing Leonard Cohen’s Hallelujah if you get on well with this one.

With easy lyrics that you’ll know off by heart without thinking about them, ‘Let it Be’ is a superb choice for the rookie singer.

It’s also a fun song that will cause an audience to spontaneously sing-along – that’s no bad thing if you’re worried about making a fool of yourself.

One of those feel-good songs that makes all the world’s woes seem to disappear (till you get home and put the news on).

It’s effortless to sing too.

Another cracker of a song here from Sting. You wouldn’t go near most of his songs with a barge pole. However, this one is a surprisingly easy song to sing.

As it’s quite an emotional one, you might even get your audience welling up a bit. But, if you do, pat yourself on the back. You’re a natural!

If you fancy stretching yourself a bit, this is a good one. Of course, it would help if you had decent control of your upper and lower registers.

It’s also one of the most romantic pop songs in recent years, talking about a love that lasts a thousand years (that’s what you call a long-term relationship :-)). The song appears in the movie The Twilight Saga: Breaking Dawn.

Voted most popular karaoke songs for dads (the song is a throwback to heady days of partying in the ’90s).

Despite Liam Gallagher’s onstage swagger, he was never an accomplished singer, so this won’t give you too many issues to sing (it’s sung in the ‘chest voice’ if you must know).

As good as Bob Dylan was, he was never an outstanding singer (technically sound, I mean. I think his voice is great because it’s so different).

Because of this, you can pick almost any Dylan song and have a decent stab at singing it. Of course, with his extensive discography, you’re spoilt for choice, but I think ‘Knockin’ on Heaven’s Door’ is a great song choice. Its simple lyrics make the song easy.

The Guns ‘N Roses cover of this song is pretty good too.